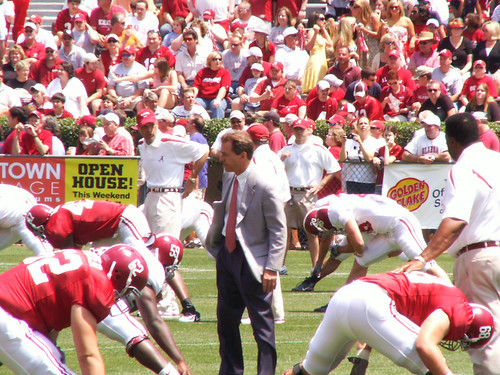 What Does Mac Jones Bring to The NFL?

There is one universal truth in football, and that is that the quarterback position is the most important position on a team. The history of the draft has proven the value teams place on the position. In the past 3 years there have been at least four quarterbacks taken in the first 53 picks of the NFL draft. In 2021 we are facing a decrease in cap space and at this time eight time pro bowler Phillip Rivers has announced his retirement and the majority of people believe veteran quarterbacks Drew Brees, Tom Brady, Ben Roethlisberger, and Alex Smith to retire before the 2022 NFL Draft. On top of this, there are a few teams in the league that do not have a starting caliber quarterback. The stock for quarterbacks has risen because of these factors.

Many football fans undervalue quarterbacks like Derek Carr, Kirk Cousins, Matthew Stafford, and Matt Ryan who require structure in order to succeed. It is obvious that players like Patrick Mahomes, Deshaun Watson, and Josh Allen and other players who can run for the first down on top of their throwing ability — they are the preferred type of quarterback. However, those rare breed quarterbacks are generational talents and are not realistic for NFL GMs to expect to have. If you are in the New England Patriots position where they have Cam Newton who struggled as the team’s starting quarterback and the 15th overall pick in the 2021 NFL Draft your options are limited. You may be lucky to find a gem in the rough during free agency but that is risky and often costly. If that free agent does not work out then the team is set behind yet another year struggling to find a quarterback. I bet the Patriots would love for Kirk Cousins to be on their team right about now. This sort of situation leads to teams taking a chance at young quarterbacks early in the draft.

Mac Jones was born and raised in Jacksonville, Florida. In middle school he got mentorship from Joe Dickinson, who was the offensive coordinator for both the University of Northern Illinois from 1991 to 1995 and the University of Oklahoma in 1998 as well as stints as an assistant coach at Tulsa, Marshall, Tulane, and Central Oklahoma before becoming an NFL quarterback consultant for the Buffalo Bills. In High school he played for the Bolles School where he was coached by Corky Rogers who played for Georgia Tech from 1962-1965 and coached high school football in Florida since 1969, he is in the FACA, FHSAA, Gator Bowl, and Florida Sports Hall of Fame. Coming out of High School Mac Jones was rated a 3 star prospect by 247 sports and the 18th rated pro-style quarterback in the country. After originally committing to play for Mark Stoops at the University of Kentucky he was convinced by Nick Saban to join the University of Alabama.

Mac Jones was part of the same class as Tua Tagovailoa and people were curious at the time why he would take an offer where he was all but guaranteed to be a backup to Tua. Mac enrolled early to get a jumpstart on his academics and redshirted his freshman season in 2017. On November 3rd, 2017 Jones was charged with a DUI, later getting suspended from participating in the LSU game that weekend.

Saban was impressed by Mac Jones in a spring game in 2018 when Jones threw for 289 yards and two touchdowns, earning the title of spring game MVP. During the season Jones served as mostly a holder on special teams appearing in 14 of 15 games. Against Louisiana-Lafayette, he threw a 94 yard touchdown pass to Jaylen Waddle, the second-longest in school history.

In 2019 Tua Tagovailoa injured his hip ending his season, Mac Jones came in and became the starting qb for the rest of the season. During his 4 starts he beat Arkansas, and Western Carolina before falling to Auburn in the Iron Bowl, despite throwing for four touchdowns and 335 yards. Jones then led Alabama to a 35-16 win over Michigan in the Citrus Bowl. Jones finished the season with 14 touchdown passes and 1,503 yards in 11 games.

In 2020 Jones beat out Tua’s younger brother Taulia Tagovailoa, and freshman 5 star quarterback from California, Bryce Young to be the Starting quarterback. Taulia later transferred to Maryland. Mac had a spectacular season where he had 42 touchdowns, 4,500 yards, a 77.4% completion rate and only 4 interceptions on his route to winning the Rose Bowl against Notre Dame and the National Championship Game against the Ohio State Buckeyes. He was also named a Heisman finalist along with his teammate DeVonta Smith.

Mac Jones is a Pro-Style quarterback who has good accuracy and throw power. He can throw 30-35 yards with ease. He has a good feel for the pocket and good footwork, throwing from a solid base. He leads defenders with his eyes often making it hard for defenders to read where the pass will go. He knows how to read the defense and make line adjustments, and rarely turns the ball over. He has proven he can handle high pressure situations and games. Jones is very smart and humble, he graduated with a 4.0 GPA in two and a half years. He has undergrad communications studies and a Masters degree in Sports Hospitality. He also had good coaching from middle school through college. Jones loves the game of football and plans to be in the sport in some capacity even after his playing career is over. In an interview with Dan Patrick he said “If you focus on the wrong results then you wont end up where you want to be” and I feel like that is something that proves he can be a leader.

Jones is only 215 pounds and may need to bulk up a little to handle sacks in the NFL. On passes of 40 or more yards he often underthrows the receiver, but still gives the receiver a chance to make a catch. It is hard to gauge his talent completely since he had a great coach in Nick Saban and great weapons to throw to. In 2020 he had only 44 passes into tight windows out of 402. In comparison Joe Burrow had 124 passes into tight windows out of 527 passes. This limits the amount of film and confidence in his ability to throw into tight windows. Jones often did not audible passes as you see Aaron Rodgers and Tom Brady do in the NFL, often relying on head coach Nick Saban to call the right plays. Jones struggles to play outside structure and make off platform throws and likely needs a year to familiarize himself with the offense. The DUI in his freshman year is also concerning but the decision makers will get to interview with him and decide if this is a problem or not.

If Mac Jones was drafted by a team with a good coach and had some good weapons around him I feel he would thrive and be in the same tier as Kirk Cousins, Derek Carr, and Matt Ryan. As far as comparisons I feel Matt Ryan is the closest in terms of ceiling, Matt Ryan was also coached by Steve Sarkisian when he was in Atlanta. With a high ceiling also comes a low floor in the form of Jake Fromm. Mac Jones however has proved to me that he is a risk worth taking for a team desperate for a quarterback. He may never be a top 10 quarterback in this league, but I am confident he can be a top 25 quarterback.

As for fits I believe he would be a good fit for the 49ers, Patriots, Saints, Washington, and the Colts. The pairing of Mac Jones with Kyle Shanahan in San Francisco seems like an ideal fit, especially considering that Jones is so similar to Matt Ryan, who Shanahan got to the superbowl with in the past. Look for Mac Jones to be drafted late in the first round since the team drafting him will have that coveted 5th year option by drafting him in the first round.