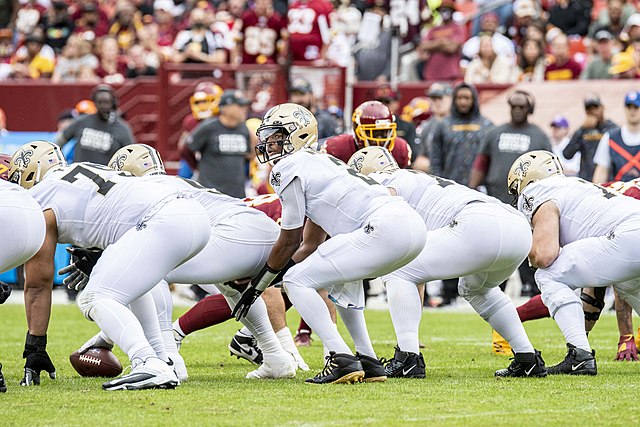 What is the best destination for Jameis Winston?

Jameis Winston might be one of the most polarizing quarterbacks in the league right now. One year after becoming the first player to throw for 30 touchdowns and 30 interceptions. Winston also threw for the eighth-most passing yards in league history.

With all that said, Winston found himself as a backup or even a backup’s backup with the New Orleans Saints. Winston said he had other offers but he felt signing with the Saints was the best move for his future.

At this point, Jameis Winston is an unrestricted free agent and has the freedom to go where ever he deems the best fit to be. I believe there are a few teams where he fits well.

That dead cap money isn’t a deal-breaker in terms of moving Hill, but at the same time there’s no reason to cut Hill and I don’t see the Saints finding any trade partners. The question then is, is Taysom Hill a long term solution at the quarterback position for the Saints?

I don’t think Hill is the solution at quarterback and it would be foolish to push the idea. Hill plays similarly to Lamar Jackson, but not anywhere near as good as Jackson. The Saints use Hill with designed run plays and utilizing the RPO.

To be fair to Taysom Hill the last two games he started, he looked pretty good by the numbers.
Hill threw for a 73% completion percentage and two touchdowns in both games. Keep in mind those two games were against the Atlanta Falcons and the Philadelphia Eagles, two of the softest defensive against the pass this year.

The Saints are only contractually obligated for one more year with Hill. The Saints absolutely could gamble on Hill this year and see what they have. If the Saints do that and it doesn’t work out, and they don’t bring back Jameis Winston, they could leave themselves in a very tough spot for 2022.

We never did get a good look at what Jameis Winston would do with Saints. Winston had one game with more than one attempt all and year. Week ten against the San Fransico 49ers, Winston went six for ten with 63 yards zero touchdowns.

Nothing impressive, but if you watched the game you were looking forward to seeing Winston start the next week, it just didn’t happen. Maybe we didn’t see more of Jameis Winston because Sean Payton didn’t want to tip his hand. The Saints still need to negotiate a contract with Winston.

Regardless of where Winston lands, it’s going to be a bit of a gamble. I believe Winston will look for a place where he has more of an opportunity to start in 2021.

One team with who I think it would be wise to take this gamble is the Pittsburgh Steelers. It looks Big Ben Roethlisberger wants to return for another season, but he still needs to work out the contract to make that happen.

I believe the Steelers will find a way to get it done with Big Ben for 2021, but the Steelers would be foolish to think about anything beyond next year. The Steeles already brought in Dwayne Haskins, which shows they aren’t sure about Mason Rudolph still.

I can understand the calculated risk of a low-cost contract for a first-round draft pick, but I don’t see it with Haskins. I am hopeful a restart in a new location will do him well, but I wasn’t sold on the talent and now the diva drama that led to his dismissal in Washington? I would rather pass on Haskins and gamble on Winston.

They still could bring in Winston because the contracts, for both Rudolph and Haskins, wouldn’t have the Steelers on the hook if they decide to waive one or both. I understand Winston’s propensity to turn over the ball, but can we at least what he can do since he had his eye surgery?

This next team might surprise you, but please hear me out. The Atlanta Falcons have the fourth overall pick and have a couple of options. The Falcons could trade back and try to stockpile picks. Or, they could take any number of talented players and any number of positions, including quarterback.

Arthur Smith, the new Falcon’s coach, has a history of running a balanced offense during his time with the Tennessee Titans. Smith also played a part in turning Ryan Tannehill’s career around. The Falcons most certainly hold onto Matt Ryan this year so they can gamble on Winston.

I understand this would be Jameis not taking a step up to start right away. But, if the Falcons are considering moving on from Ryan after 2021, I could see them wanting the option of giving Winston some playing time during the year. Why not sign Winston to a one year contract, let him play after figuring out the offense, and see what you have?

There is no guarantee the Falcons will have an early pick in 2022 as they do for 2021. The Falcons may not have a shot at the quarterback they like at the fourth overall pick. If they take a chance on Winston, they can use that pick to help the team in any number of places or trade back without sacrificing the opportunity to get a quarterback early in the NFL draft.

While wishful thinking on my part to see Winston work with someone like Arthur Smith is the next pick may not be likely, but it would be smart. Indianapolis is a prime spot for the team and Winston.

The Indianapolis Colts have the offensive line to protect Winston. A coach who was once a quarterback himself in Frank Reich. A solid run game to lean on so, there’s no need to ask Winston to do too much. There’s also plenty of weapons to throw to.

If Winston is ever going to succeed, Indianapolis is as good as any place. There’s not a team in the NFL more ready to win right now in need of a quarterback than the Colts.

The Colts also have a young quarterback resting on the bench. Jacob Eason entered college as a highly regarded prospect. He lost the starting position job to Jake Fromm at UGA, and while you may not know much about Eason, he’s a name to watch.

Eason does have the arm to compete in the NFL. He was a developmental prospect for the Colts, and we haven’t seen a thing from him. Winston at least has started some games in the NFL and even won a few. It wouldn’t hurt to have a veteran presence on this team, even if Eason ends up being a heck of a quarterback.

The last team I will mention is the Denver Broncos. I am not ready to completely write off Drew Lock yet, but my pen is ready. Lock showed some glimpses of brilliance but then also looked just flat terrible.

It would be fair to assume Winston would be able to step right into a quarterback competition for the starting spot. Pat Shurmur has done pretty good work with quarterbacks historically.

Shurmur worked with Nick Foles when Foles was putting up his crazy efficient numbers with Phillipedia Eagles. He also was the OC with the Minnesota Vikings when Case Keenum took over for Bradford and lit that offense on fire.

Shurmur also did some great work with Daniel Jones. A lot of people were excited to see Daniel Jones this year. That was based on what we had seen from Jones the last two years. I think it’s fair to say he was a disappointment this year, and I think Shurmur was getting more out of Jones or at least putting him in a better position to succeed.

I thought Lock would take a bigger step forward with Shurmur and that was probably the overall goal of the Broncos. The “covid off-season,” put both coaches and players behind, but it was even more evident with any place with a coaching change; this is why I haven’t written Drew Lock off yet.

A little competition never hurt anyone and letting both Lock and Winston compete for a starting spot on that roster would be a fun thing to see. Winston doesn’t have the leverage to demand a high dollar contract and Lock is still under his rookie deal.

The team has plenty of tools to throw to for either player to succeed with Jerry Jeudy, Cortland Sutton, Noah Fant, Albert Okwuegbunam, and KJ Hamler. Shurmur is a perfect coach to help both of these players. At the ninth overall spot, the Broncos are probably forcing a quarterback pick instead of getting the player they want.

The risk to bring in Winston to compete with Lock is a minor financial risk, with the potential outcome of hitting a home run. The talk about Winston has always been if he could just clean up the interceptions. He can make all the throws and is a natural leader. He needs to find a way to play smart and let the game come to him.