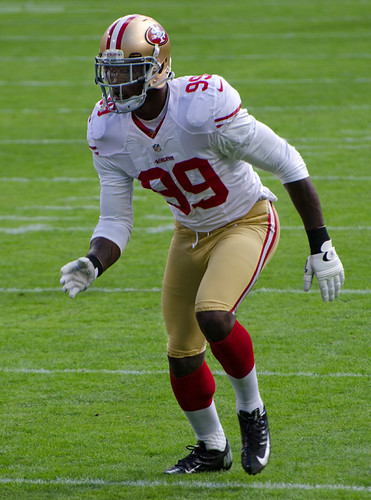 "Aldon Smith" by Mike Morbeck is licensed under CC BY-SA 2.0

What is the best landing spot for Aldon Smith?

Second chances are not a luxury that everybody has the fortune of getting. Usually when you make a mistake, it’s over. You don’t have the ability to go back and right your wrongs. But when another chance is presented to you, you have to go out and take it. The NFL is at the heart of these second chance stories; with the most recent being that of defensive end, Aldon Smith.

Going into the 2011 NFL Draft, Smith was touted as the next big thing when it came to the defensive end position; essentially, Smith walked so Jadeveon Clowney could run. After taking a redshirt his first year at the University of Missouri, Smith exploded onto the scene as a redshirt-freshman:

After being selected with the seventh overall pick by the San Francisco 49ers, Smith took the NFL by storm, breaking the 49er’s franchise record for most sacks by a rookie in a single season (14.0), and then the NFL record for most sacks in a player’s first two seasons (33.5). Just as he was making his name known on the field, however, the same was happening to him off the field.

On January 28, 2012, six days after the 49er’s NFC Championship game loss to the Giants, Smith was arrested for driving under the influence in Florida. This was just the beginning of a slew of arrests for Smith. After the 49er’s released Smith in 2015 for an arrest in an alleged hit and run, Smith couldn’t seem to keep his act together. After playing nine games for the then Oakland Raiders in 2015, Smith was issued a 1-year suspension by the NFL.

Following the suspension instated by the NFL, it was an uphill battle back to the league for Smith. After four long years out of the league, Smith was granted his reinstatement back into the NFL in 2020, where he signed a one year, $2,000,000 contract with the Dallas Cowboys. After that much time out of the league, and now 31-years old, most would assume Smith would be a complete shell of himself; and while it may have taken time for Smith to get back his football shape, the flashes of talent were clearly still there.

Now, Smith is an unrestricted free agent, looking for his next contract. With an extensive off-the-field history, is Smith the answer for a team in need of help on the defensive line? I believe that everybody deserves a second chance. Smith proved last season that he is still serious about playing this game, and his on-the-field play showed that the dude is still a physical specimen. Here are five teams that need to make a move on acquiring Smith this offseason.

Following a trip to the AFC Championship in 2019, and the humiliation of Tom Brady in the Divisional Round, the Titans seemed poised to repeat their success in 2020. Heading into the 2020 season, the Titans seemed to be bolstering a high-powered offense and a ferocious defense: the only issue? The defense forgot to show up.

Despite the emergence of second-year player Jeffery Simmons, who led the defensive line with 3.0 sacks and 49 combined tackles, the defense fell flat. After registering 43 sacks as a team in 2019, the Titans followed that up by only registering 19 total sacks during the 2020 season.

Even though star-player Jadeveon Clowney went down with a knee injury in week eight, his impact through the first eight games was practically nonexistent, as he recorded:

The Titans are in need of help on the line. With Clowney entering the free agent pool during the offseason, Smith could provide that much-needed pressure on opposing quarterbacks; and he won’t cost that much, either!

Tennessee does not have too many big name players entering free agency in 2021. I believe that if the Titans signed Smith on a very team-friendly contract, he will add a much needed resurgence to that decrepit defensive line.

The Cowboys were the team to take the chance on the rescue-project, Smith. The franchise clearly saw something in Smith that no other franchise was able to see. For that, I must give them some credit. Was Smith able to carry the abysmal Dallas defense? Well, no.

Originally signed as the replacement for Robert Quinn, Smith showed glimpses of his supreme athleticism alongside DeMarcus Lawrence, who combined 11.5 sacks as a pair.

The Cowboys are in need of much more than Smith in order to revamp that defense; but bringing Smith back, who already knows the system, could benefit the Cowboys in the long-run. The organization still needs to re-sign star quarterback Dak Prescott, which will surely leave the team with little-to-no cap space. I believe that the Cowboys should re-sign Smith to a fairly cheap contract, giving him more time to build chemistry with Lawrence on the line.

The Raiders were the last team to give Smith a shot in this league, prior to his suspension. Could it be the right time to rekindle that relationship? Based on the status of the current Raiders defensive line, now seems like the perfect time.

The Raiders are not the new kids on the block when it comes to offering out second-chances to players. From Vontez Burfict to Antonio Brown, the organization definitely does not shy away from the controversial; and what would be more controversial than bringing Smith back to the silver and black?

Following the organization’s move to Las Vegas, a new attitude seemed to follow the team into the desert. Hard-hitting, hard-nosed football is the brand that Head Coach Jon Gruden brings with him; and my guess is Smith is the kind of player that Gruden would just love.

Coming off a surprise season in 2019 with the emergence of rookie Maxx Crosby, the Raiders defensive line didn’t really show up in 2020, registering:

With no big-name free agents to re-sign in 2021, the Raiders could afford to pay Smith; even if it is quite cheap. His upside alone is worth the risk, in my opinion. If he returns to even a shred of who he was in San Francisco, the Raiders will be very happy with their investment.

From one of Smith’s former teams to another, the San Francisco 49er’s should definitely look into bringing Smith back to round-out what is already a loaded 49er’s defense.

This landing spot seems the least likely of all teams I mentioned, but boy would this be fun. After being released by the Niners in 2015, this could go down as one of the feel-good stories of next season.

As I mentioned before, the 49er’s boast one of, if not, the best defenses in the NFL. Led by stud-defensive end Nick Bosa, opposing quarterbacks quake in fear every time they drop back to throw; and for good reason.

With defensive end Solomon Thomas set to become an unrestricted free agent in 2021, the 49er’s could look to replace him with the likes of Smith. Smith would add athleticism to an already athletic line, and could benefit heavily from the double-teaming of Bosa. Being that the cost to acquire Smith surely isn’t that high, this seems like a slam dunk move by San Francisco, who could make good on the investment they made in him nearly a decade ago.

There is nobody who takes on more reclamation projects than Bill Belichick. Whether the investment was good (Randy Moss) or bad (Cam Newton), Belichick is often willing to give budding-stars a second chance to be impactful in this league. Considering the Patriots bolstered one of the worst defensive lines in 2020, it may be time for the Aldon Smith reclamation project to make its way to Foxboro.

The Patriots often pride themselves on “making something out of nothing”, which usually worked; especially with Tom Brady under center. However, during the 2020 season, that “something” was really nothing.

With many big-name free agents to resign (Joe Thuney, David Andrews), and defensive tackle Adam Butler most likely not being re-signed, the Patriots could look to sign Smith on a very cheap contract. Smith’s return to superstardom isn’t guaranteed. However, I believe the Patriots are one of few teams that could still maximize Smith’s remaining talent and help him complete his full-circle story back into the NFL.