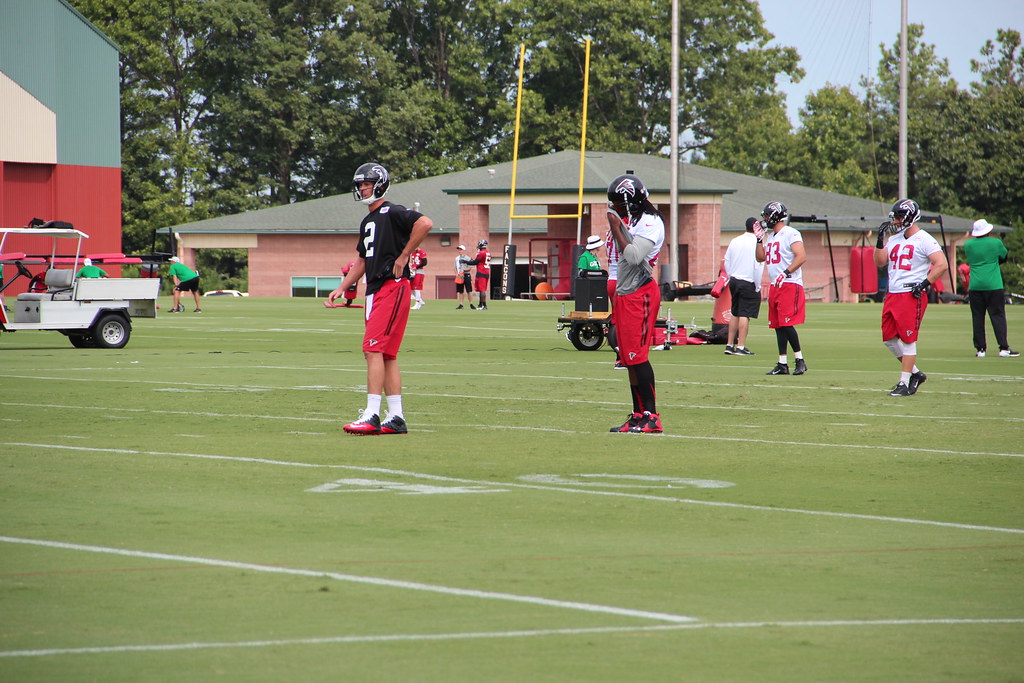 Which RB Can Complete the Falcons Offense?

Super Bowl LV is just four days away. The overwhelming majority of the 100+ million projected viewers of the game are happily planning their famous homemade Big Game appetizers and looking forward to a potential all-time classic.  However, if you’re a Falcons fan, you probably just noticed a Timehop notification from four years ago that completely ruined your day.  Everybody remembers 28-3, especially if you happen to root for the Dirty Birds, the Patriots, or the *holds in barf* Saints.  Every Falcons fan remembers where they were at on that dreadful February day in 2017 and probably still feels a sharp pain in their chest anytime the topic is mentioned.  To quote the former Colts Hall of Fame Center, Jeff Saturday, “RUN THE BALL.”  Those four words may have altered the outcome of that game, and Dan Quinn would probably have a statue outside of Mercedes-Benz Stadium instead of trying to find the right shade of Cowboy-blue sneakers to match the rest of his work attire.  But I digress.

Fresh off a miserable 4-12 season that saw Dan Quinn and the long-time GM Thomas Dimitroff fired after an 0-5 start, the Falcons have since overhauled the front office and the coaching staff.  Hiring former Titans OC Arthur Smith as the new head coach and former Director of Pro Scouting for the Saints Terry Fontenot for the new GM role, the Falcons are looking to rebrand and retool a relatively talented 4-12 roster.  The Atlanta Falcons have not had a 1,000-yard rusher since, you guessed it, 2016.  Devonta Freeman was the last rusher to reach that milestone for the franchise, doing so in back-to-back years in ’15 & ’16 (Pro Bowl selection in both years).  Even before Freeman, you would have to travel back to the 2011 season to find another 1,000-yard season, in which Michael Turner ran for 1,340.  Needless to say, the Falcons have never been a dedicated ground-and-pound team, but you have to be able to “RUN THE BALL,” especially come playoff time when weather conditions tend to become less favorable.

Since 1998, the Falcons have made the playoffs nine times, with two Super Bowl appearances in that span.  In the nine seasons in which Atlanta made a playoff appearance since 1998, they have had a 1,000-yard running back in six of those seasons (67%).  The three seasons in which Atlanta did not have a 1,000-yard runner and still made the playoffs were 2002, 2012, and 2017.  In 2002, Michael Vick (777 rsh/yds) and Warrick Dunn (927 rsh/yds) combined for over 1,700 rushing yards and 15 touchdowns on the season.  One could argue the Falcons had a darn good run game in 2002.  In the other two seasons without a 1,000-yarder, the Falcons managed to get 800 rushing yards and double-digit TDs (10) out of a 30-year-old Michael Turner, and 865 yards with 7 TDs (in 14 games) out of Devonta Freeman.  The formula for most any NFL team consistently making playoff and Super Bowl appearances is to run the ball effectively, and Arthur Smith seems to be the right man for the job in Atlanta.

With all of that being said, let’s take a look at three running backs in the 2021 NFL Draft that could potentially land in a Falcons’ uniform come late April.  PFF’s latest draft projection (https://twitter.com/PFF_College/status/1356596173830815745?s=20) has the Falcons taking the highly-touted OT, Penei Sewell, with the fourth overall pick.  The Oregon product opted out of the 2020 season, but the consensus is that he did not necessarily need to play this past season to secure his top-10 pick status.  Sewell is being hailed as one of the most talented and well-polished offensive tackles in recent memory, and the Falcons can ill-afford to enter the 2021 season without improving their offensive line.  While the Falcons do not necessarily NEED an offensive tackle (Jake Matthews & Kaleb McGary under contract thru 2023; both former first-round picks), the offensive line as a whole needs to improve if Arthur Smith is going to run a similar offense to what he ran in Tennessee.

The scenarios below will highlight three potential RB candidates that the Falcons should target in this year’s draft, based on PFF’s round projection (earliest to latest) for each RB and Atlanta taking Penei Sewell with the fourth overall pick:

If Javonte Williams is anywhere close to Aaron Jones, the Falcons would be remiss to pass up such a talent with their second-round pick (pick 35 overall).  Williams possesses all of the tangible assets of a successful NFL running back, something an Arthur Smith offense will need to be successful.  Taking a running back 3fifth overall is a steep price to pay, especially with significant holes on the defensive side of the ball and aging offensive weapons. Still, Javonte Williams is one of the few backs worth the draft capital.  I believe he has a chance to fall to the late second or early third round, which would benefit the Falcons tremendously.  Williams’ rare combination of speed, power, pass-catching ability, balance, and ability to force missed tackles will serve him well in the Falcons’ offensive scheme.  If Williams falls past the Falcons at pick 35, the Falcons could trade up from the 68th overall pick to take him later in the second round, assuming he does not fall to the third round.

Najee Harris is an exceptional talent that quietly got better every year playing at the University of Alabama.  Harris is a phenomenal pass-catcher and possesses outstanding balance and cutting ability for a bigger back.  Harris already has a body built for the rigors a bell-cow role will demand, and if the Falcons draft him, I expect them to use him as such.  As the OC in Tennessee over the last two seasons, Arthur Smith’s overall rushing offense ranked second and third, respectively.  Derrick Henry also ranked first in rushing attempts in each of the previous two seasons in Smith’s offense. I’d expect Smith to utilize Harris similarly if the Falcons land this unique talent. I realize Najee Harris may never equate to a Henry-esque level of skill, but he does possess better pass-catching ability and seems to be a better lateral runner when he needs to be.  The Falcons’ inability to run effective play-action has directly impacted Matt Ryan’s efficiency over the last three seasons, but adding a back like Harris (and an OT like Sewell) would immediately make the Falcons better.  Eric Eager from PFF said this in an article regarding the new coaching hires around the NFL, specifically the Arthur Smith hire in Atlanta.  “A match seemingly made in heaven, Smith heads to Atlanta with a similar offensive philosophy to the one that had the Falcons steamrolling through the NFC and into the Super Bowl after the 2016 season. Things have not been the same since with the Falcons going 28-36 over the last three seasons and Matt Ryan’s PFF grade falling below 85.0 each year” (Eager, 2021).  I do not believe Harris will fall to the third round as his PFF profile suggests, but if he does, I will scratch my head if the Falcons passed on him.

Trey Sermon is the third back that would be an exciting fit for the Falcons and may be a steal in later rounds.  Sermon essentially served as a backup or committee back in his four years of college ball.  Sermon saw his largest rushing attempt total in 2018 when he carried the ball 164 times for 947 yards and 13 TDs while adding almost 200 yards receiving on just 12 receptions.  Sermon subsequently left Oklahoma after the 2019 season and transferred to Ohio State.  Sermon then served as a backup to Master Teague but came on strong after Teague was injured late in the season.  Sermon showed he could be productive and possesses some sneaky tangible skills that will translate to the NFL.  Sermon is a similar build to the aforementioned Najee Harris. If the Falcons were to pass up the running back position earlier in the draft to address more glaring needs, Sermon might be the late-round flyer they take a chance on.  Sermon is an underrated pass-catcher and showed in the limited attempts he had throughout his college career that he can carry a bell-cow workload and finishes runs with the best of them.  One other interesting statistic of note is that Sermon simply does not turn the ball over, which is something that could earn him carries in critical situations such as the red zone or in late-game situations.