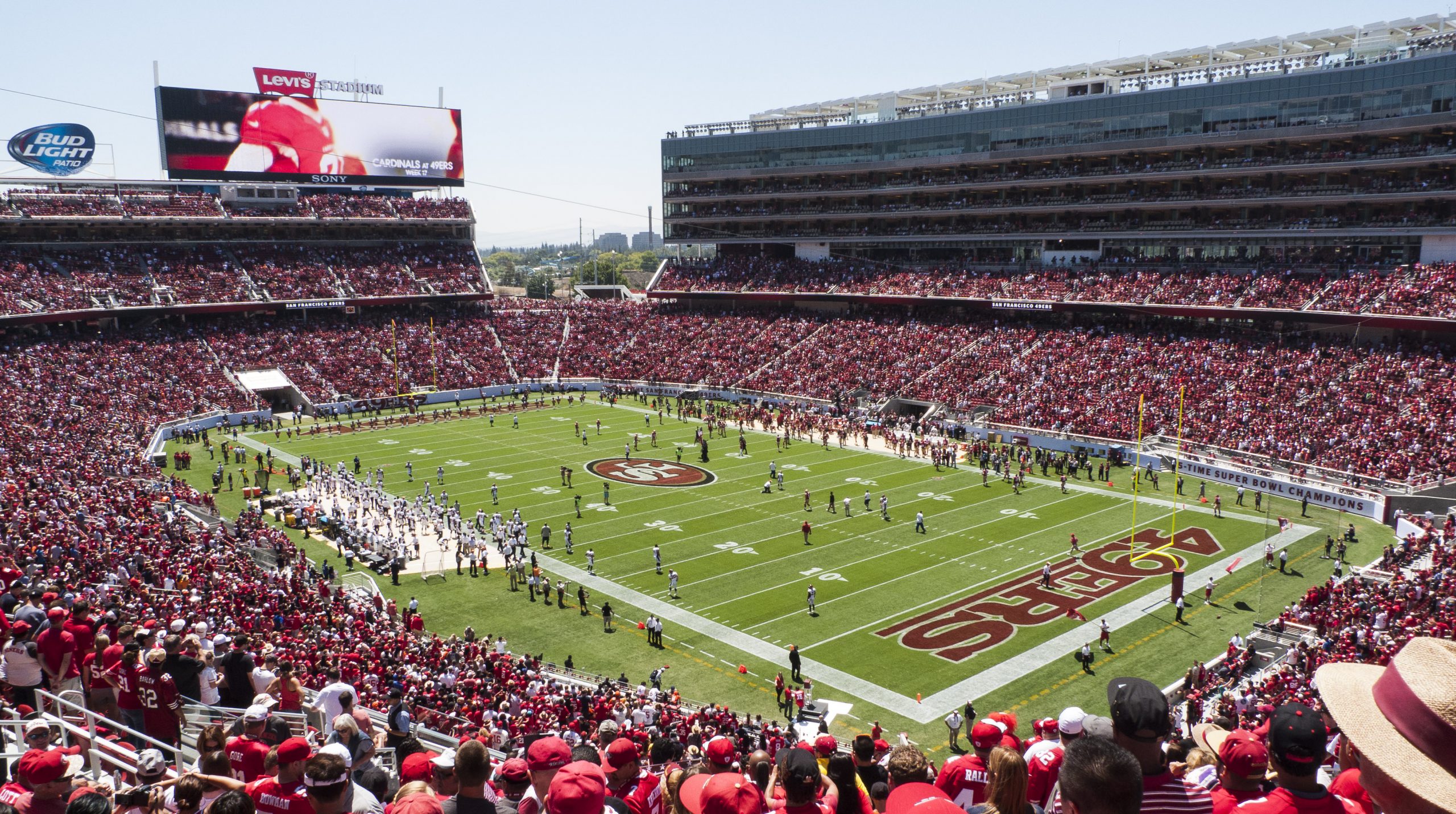 "File:Broncos vs 49ers preseason game at Levi's Stadium.jpg" by Jim Bahn is licensed under CC BY 2.0

Where Does Kirk Cousins Land?

The San Francisco 49ers sit in an uncomfortable spot heading into the 2021 offseason.

They’re just over one calendar year removed from competing for a Super Bowl. For the 2019 season, San Francisco set the league on fire en route to 13 wins, the conference’s number one seed, and an NFC Championship. They even had a 10 point lead at one point in the fourth quarter of the big game.

And now? The 49ers finished 2020 sitting at 6-10. They were plagued by injuries throughout the year, have now lost their defensive coordinator, and perhaps above all, they had a hole at the quarterback position.

Granted, their Week One starter from this past season, Jimmy Garoppolo, was one of the victims of an injury-riddled season– but still, two things made themselves apparent.

Number One: The 49ers’ depth behind Garoppolo can look nice at times in a quarterback-friendly system, led by Head Coach Kyle Shanahan, but it’s not enough to reach the Super Bowl contending aspirations of the franchise. Six wins and the 21st ranked scoring offense in the NFL can attest.

Number Two: Even when healthy enough to play, the struggles of Garoppolo are hard to ignore. 2019 told the story of a quarterback just good enough to get a team to the door of a championship under perfect circumstances. He was efficient, completing nearly 70% of his throws for 27 touchdowns, but was not asked to do much.

In 2020, through six games, Garoppolo looked to have taken a step back. His accuracy decreased, his interception rate increased, and after seven touchdown throws through those six games– Garoppolo’s season was over with a 3-3 record.

The San Francisco 49ers are still a group with talent, with the right coach in place. If they were to move on from their current situation at quarterback for a higher-ceiling candidate, the right player could be the one necessary piece to bring the 49ers back into Super Bowl contention.

There are at least five names, from the draft to free agency to trade candidates, that could help San Francisco to ascend. Here they are.

The San Francisco 49ers need some consistency at the quarterback position, and someone talented enough to fully elevate the roster around them taking snaps for the franchise going forward.

Deshaun Watson needs some consistency on a franchise level, and a group of coaches, managers, and owners who are talented and willing enough to recognize Watson’s immense skillet and build an offensive scheme that maximizes his talent.

Head Coach Kyle Shanahan has shown through years in the league, regardless of his role in an offense, an ability to impact quarterbacks for the better. In his tenure as the offensive coordinator with the Washington Football Team, Shanahan brought out the best in a rookie Robert Griffin III– who won the AP Offensive Rookie of the Year award in 2012 and earned an invite to the Pro Bowl, the only one of his career.

As an offensive coordinator with the Atlanta Falcons, Shanahan saw repeated success at the quarterback position– putting together a gameplan that led veteran Matt Ryan to his first MVP award in 2016, and his only since. The following season, Shanahan was brought to the 49ers to serve as the team’s head coach, where it’s been more of the same.

The 49ers’ won 13 games, and the NFC, in 2019 with 16 starts from Jimmy Garapplo completing 69% of his passes, and more recently, the San Francisco offense propelled backup quarterback Nick Mullens to some NFL history– where this season he shot up to second place on the list of most passing yards through 16 starts.

Now, imagine what he could do with Deshaun Watson, an already established star in the league with a four-year track record of thriving without the help of a quarterback friendly system or overwhelming offensive roster talent.

In fact, Watson’s best season as a pro came this year, with the circumstances around him sitting close to rock bottom. The franchise had fired their coach in the middle of the season, but not before trading DeAndre Hopkins– a three-time All-Pro receiver, and Watson’s favorite target. The team didn’t have a player run for more than 700 yards, gave up the second-most sacks in the league, and saw Will Fuller, the team’s best receiver, get suspended for the final five games of the year.

All this, and Watson still hit a career-high for touchdown throws with 33. He still threw the fewest interceptions of his career with seven, had the best completion percentage of his career, and the third-best in the league at 70.2%, all while throwing the ball more than ever before.

Watson is hitting his peak. He’s shown to be a player that can excel with or without much talent around him. The 49ers and Shanahan, on the other hand, have proven to be a steady force that can produce a worthwhile offense without the help of elite talent. But the union of those two forces could be a deadly mix for the rest of the league.

A reunion of sorts between Minnesota Vikings quarterback Kirk Cousins and Shanahan could, and maybe even should, be in the works for 2021.

Cousins and Shanahan have been a part of the same organization, with the current 49ers’ coach serving as Cousins’ offensive coordinator in Washington in 2012 and 2013. Cousins even got a to play a bit during that time, even while primarily serving the role of backup to Griffin, but with an eight touchdown to 10 interception ratio during that time, Cousins never really got the chance to showcase the player he is today in a Shanahan offense.

Next season could bring about some second chances for both parties. Cousins has developed into a much different, much stronger player than he was in 2013. Now a two-time Pro Bowler, the 32-year old quarterback has evolved into an efficient, accurate passer capable of leading two different franchises to the postseason.

But Cousins, despite his talent, might serve to benefit from a clean slate– same for his offense. After a 7-9 finish to 2020, despite a wealth of talent on the offensive side of the ball ranging from Adam Thielen and the rookie Justin Jefferson at receiver, to the two-time Pro Bowler Dalvin Cook at running back, a rebranding for both parties might be what’s best.

The Vikings might need a quarterback who can provide more of a spark than be a steady hand for a talented offensive roster, while Cousins might just need a ready-made contender in need of nothing more than above average play to reach their Super Bowl aspirations.

Another reunion might be in play for a new 49ers’ quarterback, but not so much a reunion between Shanahan and one of his former players, but between a quarterback and his former franchise.

Alex Smith, now 36 years old, was taken at the top of the 2005 NFL Draft by none other than the San Francisco 49ers. Smith provided the franchise with seven years of steady play at quarterback– but hadn’t truly reached his career peak until becoming the quarterback for the Kansas City Chiefs, where an offensive-minded head coach in Andy Reid led Smith to three Pro Bowl seasons in his five years with Kansas City.

More recently, Smith has made his way to the Washington Football Team where, once again, he’s shown an ability to lead a team. But the Football Team could be looking for options outside of the longtime NFL veteran.

Under the guidance of Washington backup Taylor Heinicke, the Football Team came within one score of beating the eventual NFC Champion Tampa Bay Buccaneers– looking like the potential future of the franchise, albeit in a one-game sample size. And if Washington were to prioritize a quarterback beyond Smith, the 49ers could be a potential suitor.

Now with Shanahan at head coach, Smith could enter an environment similar to the one he thrived in with Kansas City. An offensive-minded head coach leading the charge, with a track record of maximizing the talent of the guy taking snaps.

Smith made three Pro Bowls under similar circumstances. At 36 years old, the veteran might have lost a step, but he could still be a player capable of leading the 49ers franchise to a 10-11 win season under the right circumstances.

There’s gotta be at least one rookie on the list, right?

Trey Lance from North Dakota State, a powerhouse of the FCS level, might be one of the most intriguing prospects from the 2021 rookie class. Talented without question, as 42 total touchdowns without a single interception would indicate.

But the thing about Lance’s brilliant 2019 season is, that, it was Lance’s only season at the college level. The quarterback threw one pass as a freshman in 2018, and played just one game in 2020 as the FCS season ended up canceled due to COVID-19.

Lance’s inexperience also comes against an inferior schedule, compared to his 2021 quarterback counterparts. Future rookie starters like Justin Fields and Trevor Lawrence have national title experience up on the FBS level. Lance is a champion himself, but did so in the FCS.

But as we’ve explored, if there’s a coach in the league that can maximize the raw talent of an unpolished quarterback, it’s Kyle Shanahan. Trey Lance might be in need of the right hand to guide him to stardom– and he might find it in San Francisco.

Shanahan hasn’t had a highly-drafted rookie that he could fully mold from the start of his career since Robert Griffin III– in a year where 2012’s second-overall pick exceeded expectations to win Rookie of The Year. Mac Jones might have the potential to follow suit.

Jones has ranked around the consensus QB5 among 2021 draft experts, but similar to Lance, he might just be in need of the right coach and the right system to guide him to greatness. In 2020, the Alabama quarterback put up the numbers to show that some level of greatness might just be possible.

The Heisman-finalist turned national champion led the NCAA in 2020 in, well, just about everything. His 4,500 passing yards were the most in college football. His 77.4% completion rate was the highest among qualified passers. His 41 passing touchdowns were, wait, only second? Nevermind– the guy’s a bust.

College production is rarely ever a one for one translation to the pros, especially with the level of talent Jones was blessed to work with at Alabama. But what Jones’ college performance does show is that he has the traits to run an offense to near-perfection, championship-winning perfection.

His game isn’t as refined as the other quarterbacks on this list, and his profile isn’t as high. But he’s a clear talent that, in the right system, could thrive at the next level.