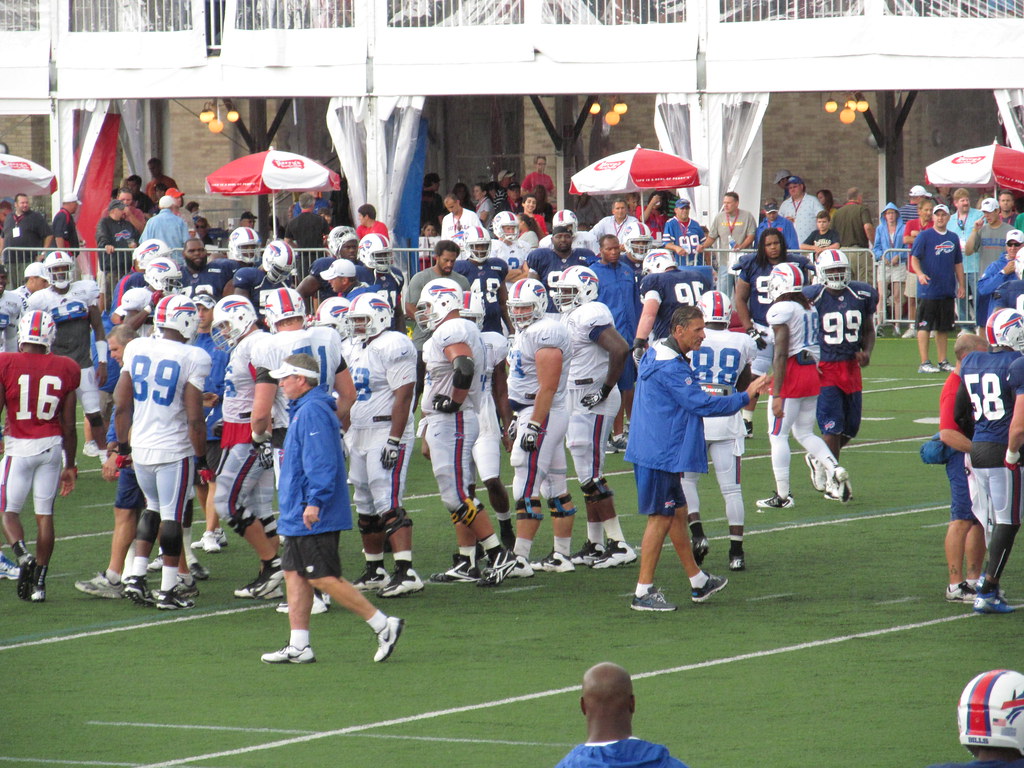 Is the Offensive Line the solution to Buffalo’s poor running game?

Down the stretch the Offensive Line of the Buffalo Bills was what significantly held back the offense. Left Tackle Dion Dawkins is the only player under contract next season who have a solid year. On the right side of the line, Jon Feliciano, Daryl Williams, Ty Nsekhe, Brian Winters, and Ike Boettger (RFA) are Free Agents. Due to the lack of Cap Space, Buffalo may have to let most of those players walk in free agency. Buffalo does return Cody Ford, Ryan Bates, Mitch Morse, and Dawkins and out of that group expect Dion Dawkins to be the only one who does not have to compete for a job. Below we will look at five players the Buffalo Bills could target in this year’s Draft and Free Agency.

Deonte Brown is a massive human being. Brown helped anchor and Alabama Offensive Line that was one of the best in the nation. In his entire career he never allowed a sack, and his play was recognized this season as he was named first team All-SEC.

While some teams will be concerned with his lack of agility or quickness, the Bills would be smart to take a chance on Brown. His size can be an asset in both the pass and run games and he certainly would help fill in Buffalo’s potential vacant guard spots. Brown will likely be a strong option if the Bills choose to not pick and offensive lineman in the first or second rounds.

My favorite option on the list, Quinn Meinerz comes from division III Wisconsin Whitewater which would be a massive jump to the NFL. However, Meinerz could be one of the most coveted players past the first round after the show he put on at the Senior Bowl. Meinerz absolutely dominated the competition that was filled with first and second round defensive lineman. Meinerz did not only look good for being a Division III player but he practically outplayed every other lineman.

It is hard to find a weakness in his game while watching tape. That being said, playing your whole college career against division III players is not close to the competition in the NFL and that will scare many teams away from picking Meinerz. After what Meinerz did at the Senior Bowl the Bills should take a chance on this D-III prospect especially if he falls past the third round.

Landon Dickerson is the epitome of toughness. Tearing his ACL in the SEC Championship he still suited up in the National Championship to be a reserve lineman in case anyone on Alabama went down. Dickerson was an All-American in his senior season and won the Rimington Trophy (Best Center in College Football).

Dickerson struggles is in his ability to get consistent blocks down field. His lack of athleticism and ACL injury will make him fall down most draft boards across the league. Dickerson is an intriguing late round option for Buffalo. Although Dickerson is limited, he dominated one of the best conferences in College Football and that should not be forgotten about. Dickerson does not have to start right away and could sit and learn behind veteran center in Mitch Morse.

Joe Haeg plays in a reserve role for the Tampa Bay Buccaneers. Haeg has 38 starts under is belt and 3 this year for the Buccaneers. Although Haeg is a tackle he does have the ability to play at the guard spot too. He will be 28 years old when Buffalo kicks off next, so he still is relatively young for a tackle.

Buffalo could take a chance on Haeg to replace Daryl Williams who played so well this season that he most likely will be too expensive for Buffalo to afford. Like Williams was, Haeg is coming off a down year so Buffalo could likely get him for cheap and hope that his contributions outweigh his salary. Haeg likely will be looking for a starting opportunity and Buffalo can offer him that while not breaking the bank.

D.J. Fluker is a solid veteran option for the Bills. At 30 years of age by the kickoff of the 2021 season Fluker has 96 starts under his belt. This year he was a spot starter for the Baltimore Ravens with only 8 starts.

Fluker is a large guard and is known as a powerful run blocker. His contribution to Baltimore’s strong run game is a reason Buffalo should target Fluker. The Bills struggled against the run and could use a guy like Fluker who is known to move the big bodies inside. Fluker should not be too expensive because he was not a regular starter and Buffalo should seek a multi-year deal with a player who can be a good start or an above average backup.
Conclusion: Expect Buffalo to make a significant number of moves on the offensive line this season. General Manager Brandon Beane has been known to make big trades and big signings while also getting under the radar guys. With only four lineman who played in a game last season under contract for next season I would expect Beane to make upwards of four moves involving offensive lineman between the draft and free agency.