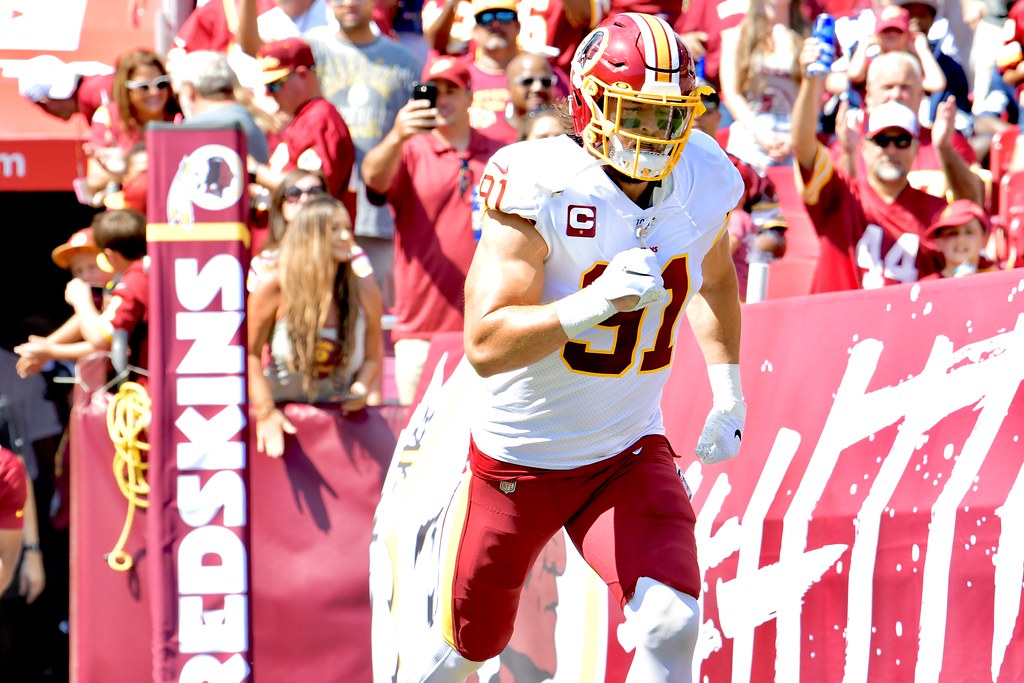 "Ryan Kerrigan" by All-Pro Reels is licensed under CC BY-SA 2.0

With the season now over teams are looking at how they can improve their roster for next year. One man who is going to be available in free agency is defensive end pass rusher Ryan Kerrigan. Kerrigan was drafted by the Washington Football Team back in 2011 and has been a starter ever since. However, with the emergence of Chase Young and Montez Sweat on either side of the defensive line, there is little place for Kerrigan. He is a four-time pro bowler and has amassed over 90 sacks in his career and although he is now 32 years of age he is still a quality player. With that in mind we have found three teams that need to sign Ryan Kerrigan.

The Baltimore Ravens might seem like an odd spot given how strong their defense is. However, this team does struggle with the pass rush and finished 18th in the league for pass rushing this season. The Ravens main defensive strength is in coverage and that needs to change. They managed to put pressure on the QB 29.3% of the time but if they want to get to the Super Bowl they need to do more. Although they have some superb players in Yannick Ngakoue and Calais Campbell it wasn’t enough to win the big prize this year.

The Ravens have plenty of cap space and so would be able to afford a player like Kerrigan. They currently have $28m to play with and although they might go for a wide receiver they cant stop on the defense. Another reason that Kerrigan makes sense for Baltimore is that he is used to playing a similar system. The Ravens use a 3-4 defensive set most of the time and so do Washington. This is a massive plus as it shows that Kerrigan could just slip into the system quite easily.

Verdict : Kerrigan is a solid pro who can slip into the Ravens defense seamlessly. He wont break the bank at around $5m a year and can improve the Ravens in a vital area that they struggle in. The Ravens would also be a destination that Kerrigan would probably be interested in as they are potential Superbowl contenders.

The Seattle Seahawks had an up and down season when it came to their defense. The team struggled in the early weeks giving up on average 29 points in the first eight weeks. However, the next eight weeks saw them average just 16 points given away. One reason for this change might have been an easier schedule but also Jamal Adams had been in the team for longer. Although the defense is not just one man, he did make a massive difference. He shared the lead for the number of pressures by a defensive player up to Week 14 with 26. He only played nine games due to injury and this shows how desperate the Seahawks are for a player like Ryan Kerrigan.

The pass rush did improve from week ten onwards but it does go to show that serious recruitment needs to happen. They do have Carlos Dunlap who had a team high 12.6% pressure rate but he cant do it all by himself. Kerrigan is the type of player that would be a success at the Seahawks. He is experienced and still has plenty left in the tank. The Seahawks have got $14m of cap space and so Kerrigan will be a great asset and they will still have money available.

Another reason that this makes sense is that the Seahawks are a contender for the Lombardi trophy. They are in a tough division but being a potential contender is always attractive to a free agent. The only downside to this move is that he would have to uproot his family to the other side of the country.

Verdict : The Seahawks make sense for Kerrigan on many levels. He will be going to a contender and they have the cap space in order to take him on. Also, they may be willing to give him more than one year. Also, it makes sense for the team who need to improve that area if they want to be more than just a playoff team.

The New York Giants might seem like a bit of a curve ball but there is a logic to it. Firstly, the Giants have struggled at edge rusher for a few years now and they need to sort it out. They do have a solid defense but the edge is the weak spot. Their top four guys that made pressure on the opposition QB were all inside defensive lineman. Leonard Williams, Dexter Lawrence, Dalvin Tomlinson and B.J Hill all did well with Williams the standout. However, the best edge rusher was Kyle Fackrell who only managed 19 pressures. This is not close to being good enough and Ryan Kerrigan would make a huge difference. Another positive is that the Giants play the same defensive set Washington. This will be easy for Kerrigan to adapt to if he moves to the Giants.

Not only is this an area that the Giants need to focus on they also have the money to do it. They currently have $8m cap space available which means they could sign Kerrigan to a one year deal. Although the Giants are not a team looking to win the Superbowl at this time they are playoff contenders. The NFC East has got four teams who are quite similar and so moving to the Giants could be moving to a playoff team.

The only negative of this move is purely for Kerrigan and if he would be happy to play for another NFC East team. Having been with the Washington Football Team all his career he might not want to go to a rival.

Verdict : Out of the three this one is the least likely to happen but it could still happen. The cap space is a little tighter for the Giants and they are not strong contenders. However, the Giants can sell Kerrigan on New York and living there. Also, the Giants do have a genuine opportunity of making the playoffs. This would be a solid option for Kerrigan and the Giants.