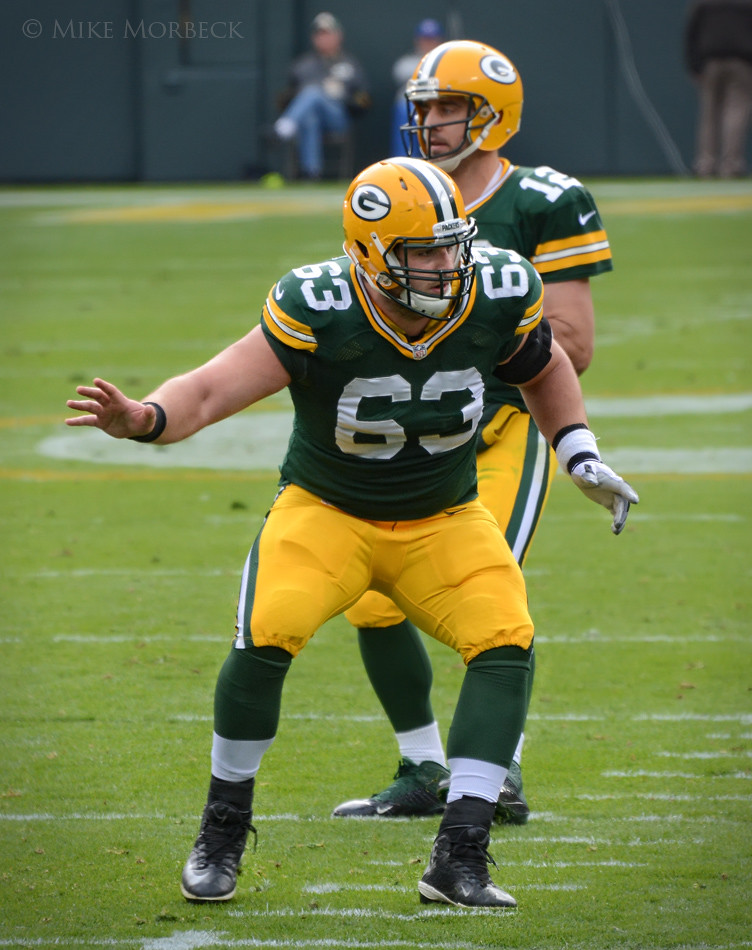 "Corey Linsley" by Mike Morbeck is licensed under CC BY-SA 2.0

Where Will The Packers Center Land?

When the Packers drafted Center Corey Linsley out of Ohio State with the fifth round draft pick in 2014 they planned on him being the back-up center. Late in the preseason of 2014 the expected starter JC Tretter, got injured making Linsley the starter his rookie season. After Tretter returned from his injury, Linsley remained the starting Center and ended up starting every game during the regular season as well as the two playoff games. His performance in his rookie season earned him a spot on the Pro Football Writers Association All-Rookie Team.

In 2015, Linsley started 13 games, missing three to an ankle injury. In 2016, Linsley started the season on the Reserve/Physically Unable to Perform list. Tretter started seven games until Linsley was activated off Reserve on November 5. Linsley went on to start every game to end the season. On March 9, 2017 Tretter signed a three-year, $16.75m contract with the Cleveland Browns leaving Linsley as the starting Center on the Aaron Rodgers led Packers team. After starting all 16 games for the Packers in 2017 Linsley signed a three-year, $25.5m contract extension.

Fast forward to 2020, Linsley has started 50 games straight and the Packers are the favorites to win the NFC North division title going into the season. After the Packers went 13-3 they were considered by many to be the favorites to represent the NFC in the superbowl. However, as fate had it they would go on to lose 26-31 against the eventual Superbowl Champions the Tampa Buccaneers in the NFC Championship game. For the great year that Linsley had he was named 2020 First-team All-Pro.

Going into this offseason the Packers have one of the worst cap situations in the league with a projected -13.55m in total space per Spotrac.com. This means that most of their expiring contracts will have to look elsewhere for jobs. After his All-Pro campaign Linsley deserves to get paid like the great center he is. According to PFF he is projected to get a three-year, $33m deal. Here are some potential destinations.

Russell Wilson is one of the best quarterbacks in the league. However, 2020 showed that the Seahawks need to do better when it comes to protecting him.

Historically the Seahawks have been able to rely on Wilson to scramble away from pressure, allowing them to spend less money on their offensive line. I personally would worry now that Wilson is getting older that the wear and tear that he’s taken by being sacked 40+ times every year since his rookie year will start to catch up to him sooner rather than later.

The starting center for the Seahawks in 2020 was Ethan Pocic who is also a free agent this year. Pocic was the 26th ranked Center in 2020 by PFF and is a decent starter, however if you can get an upgrade like Linsley it is worth doing.

Coach Pete Carroll said that he wants to run the ball more in the 2021 season at an end of the season press conference. A big factor of the run game will be upgrading the offensive line. The Seahawks should do what it takes to upgrade the offensive line, even if that means releasing some of the more lucrative contracts.

The Los Angeles Chargers have gone through a coaching change this year, bringing in the Rams defensive coordinator Brandon Staley as their next head coach.

On top of this their left tackle Sam Tevi,  and left guard Forrest Lamp are slated to be free agents as well as Center Mike Pouncey announcing his retirement in February 2021. This means that the offensive line for the Chargers is a top priority. Interestingly in 2020 the Chargers signed veteran right tackle Bryan Bulaga to a three-year, $30m contract.

Linsley and Bulaga were teammates on the Packers for six years. The Chargers organization should do everything in their power to help quarterback Justin Herbert succeed in his career and that begins with fixing the offensive line.

It is very important that the Chargers land Corey Linsley or another veteran offensive lineman this offseason.

The dolphins also added guard Ereck Flowers and Center Ted Karras in free agency. This left the offensive line with 5 players who did not have experience with the Dolphins.

Center Karras played decently well for the Dolphins in 2020 ranking as the 17th Center by PFF. He is a free agent in 2021. It is likely that the Dolphins will look to upgrade the position before resigning Karras.. Corey Linsley is the upgrade that would help solidify and mentor their young offensive line.

The Bengals looked to have an exciting season after drafting quarterback Joe Burrow number one in the 2020 NFL Draft.

The one thing that the Bengals organization failed to do leading up to the season was building their offensive line to protect Burrow. Not having a training camp hurt as well since the Bengals coaching staff didn’t have a clear cut plan on who to start.

Over the course of the season, we saw a lot of switching back and forth on the offensive line, mostly because of injuries but also because of poor play by the guys on the field.

In 2018 the Bengals drafted Center Billy Price out of Ohio State to serve as their long-term center, however since then he has struggled. The question the Bengals coaching staff has to answer is if he is salvageable. If he is not salvageable in their opinion they should go get Corey Linsley, who was born and raised in Ohio and may be welcome to a return home.

My favorite of these options is the Seahawks personally, however, it may be hard for the Seahawks to get the cap to do this move. Regardless I look forward to seeing what’s in store for Linsley’s future.