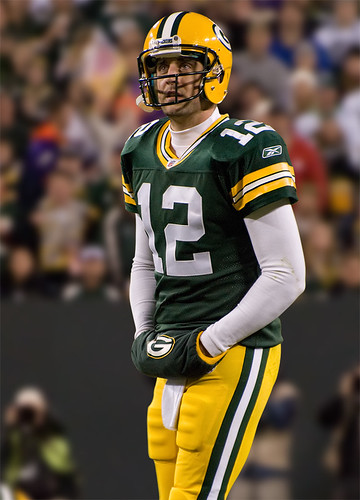 "Aaron Rodgers" by Mike Morbeck is licensed under CC BY-SA 2.0

The Packers Need to Complement The NFL MVP

The Green Bay Packers season came to a shuddering halt as they got beaten by the eventual Super Bowl champs Tampa Bay Buccaneers. The Packers rolled into the playoffs with home-field advantage.

Aaron Rodgers was the MVP in waiting, Devante Adams enjoyed a monstrous season, and Aaron Jones rumbled his way to a strong rushing season. It seemed like another title beckoned for the team from title-town. Then, they ran into Tom Brady’s Bucs; the Packers defense came up short on high-leverage situations.

The unit surrendered vital third-down conversions in the early part of the Buccaneers game. That allowed Tampa to generate confidence and put points on the board. The touchdown on the stroke of half-time broke the back of the Packers.

From that moment, the Packers’ fate got sealed. Now is the Green Bay front office’s time to assess the roster’s state; Aaron Rodgers is returning; therefore, the offense will fly like it did in 2020. The majority of the pieces are in place for Green Bay to once again contend in the NFC.

The division is theirs by default, the rest of the NFC North stinks. Brian Gutekunst must sign some game-changers on defense. The Packers are one or two pieces short of the puzzle, they can find them in free agency.

The Packers ranked 20th in pass-rush win rate in 2020, the Bucs as a comparison finished fifth. The Packers can improve in this area. That can make an already fantastic team, even better. The free agency class boasts plenty of defensive studs for Green Bay to acquire.

The bombshell news broke on Friday: JJ Watt is no longer a Houston Texan. The future Hall of Famer is now a free agent for the first time in his legendary career.

The Wisconsin native is a natural fit for the Packers. With Green Bay employing a 3-4 base formation last season, Watt can fit in as a defensive end without lining up on the edge. At 31, Watt is not as explosively dominant anymore.

Nonetheless, Watt offers insane power and experience to a defense that needs it. Watt can play alongside the nose-tackle, he can be a battering ram at the five-tech.

Watt made over 50 tackles in 2020, while notching 17 quarterback hits. The Packers own strong pass-rushing talent. As the Bucs displayed in the Super Bowl, sacks and pressures get created through scheme and play-design.

Adding Watt provides the Packers with a new element to dial up pressure. Teams might double-team him in early-downs, which could allow Preston Smith or Rashan Gary a one on one matchup.

Watt is still physically very strong, very disruptive; the Packers might be the best landing spot for Watt. And Green Bay might get a perfect piece with Watt.

The Super Bowl 50 MVP Von Miller is an unrestricted free agent. Miller missed all of the 2020 season due to injury.

There are concerns about Miller’s rehabilitation and whether he is still the dominant pass-rusher from a few years ago. Miller inked a massive $114 million deal post-Super Bowl 50.

He will not command that price tag now after a year spent on the sidelines. Miller is tailor-made for the Packers defense. Miller understands a 3-4 base formation.

That is what he played in Denver, we all remember Miller and Demarcus Ware terrorizing offenses in the 2015 postseason. Regardless of how players age, elite stars never lose their football IQ, which will stay with them forever. With his elite skills at the scrimmage line, Miller’s IQ makes him an irresistible option.

Miller provides Super Bowl-winning pedigree to a team that requires someone to take that final step. It might be time for a fresh start for him; he’s used to playing in Denver’s cold weather, Green Bay shouldn’t be an issue. It might add more problems to the Packer depth chart; overall Miller is still an upgrade on what the Packers already have.

After getting torched by Scotty Miller on a back-breaking touchdown play, Kevin King might not stay in Green Bay for much longer. The cornerback is a free agent; if it were up to Packer fans, he’d have gone after that game.

Enter Patrick Peterson. The veteran corner is also a free agent, and Green Bay is an excellent spot for him. Peterson can slot in as the number two corner opposite superstar Jaire Alexander.

That can take away some of Peterson’s pressure; the Packers wouldn’t force Peterson to become the main man. Three interceptions and 61 total tackles were the headline figure for Peterson’s 2020 season.

The concerns are that Peterson allowed a 98.2 passer rating when targeted. That is alarmingly high. One could argue that Peterson got attacked more as he often lined up against the opponents top receiver.

In Green Bay, that would not happen. Peterson’s strengths are his athleticism, and his rangy build makes him a physical nightmare for opponents.

He is a fabulous open-field tackler; his missed tackle percentage was 7.6% in 2020. Lower than his totals in the previous two years. Peterson’s leadership, skill and on-field presence is a massive boon if the Packers can land him.