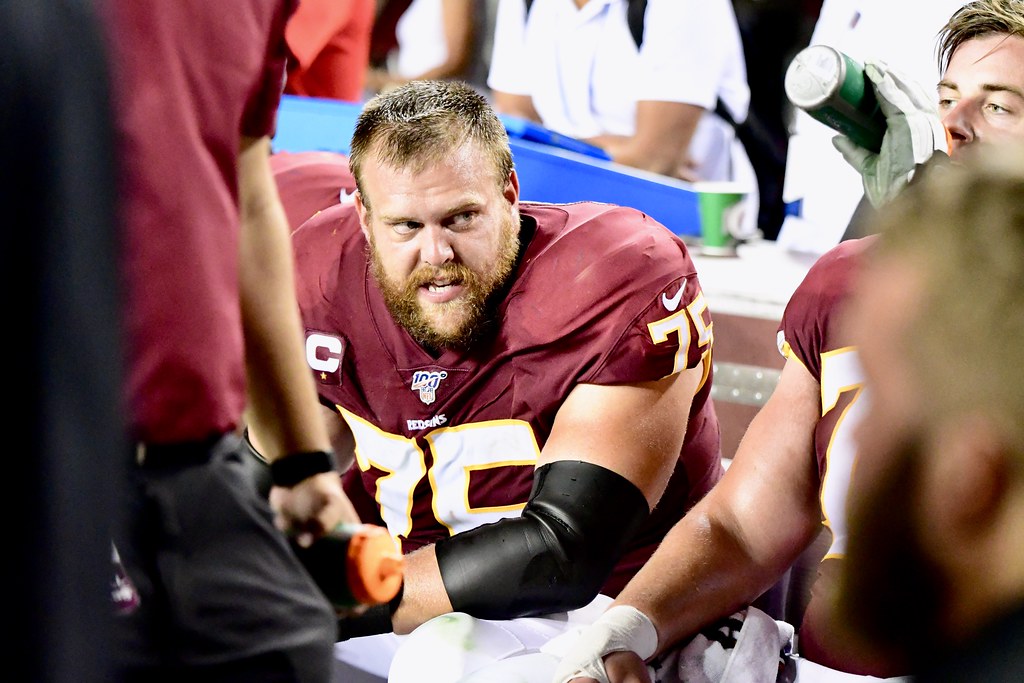 "Brandon Scherff" by All-Pro Reels is licensed under CC BY-SA 2.0

Where will Brandon Scherff play in 2021?

One of the most coveted free agents this off-season is expected to be guard Brandon Scherff. He played the 2020 season for the Washington Football Team on the franchise tag.

Scherff was drafted at pick #5 in the 2015 Draft by Washington. Since then he has been a four time Pro Bowler and in 2020 he was a First-Team All Pro. Additionally, he is only 29 years old and expected to make a big impact for whatever team he will play for.

One of the issues with Scherff is his ability to stay on the field. Over the past three seasons, he has missed 16 games. While he is a top option for any team needing offensive-line help, teams need to be wary about his health.

Sometimes it is hard to quantify how good offensive linemen are as they don’t have statistics like quarterbacks, running backs or receivers. But watch games where Scherff did not play and you will see the pressure and the lack of running lanes as opposed to games where Scherff does play.

If he stays healthy, Scherff is on track for a Hall of Fame career. It is unusual that a player of Scherff’s caliber and age is available, but here we are. Wherever he signs it’s going to be a big deal.

We watched in horror last season as rookie quarterback Joe Burrow got beat up week after week until he endured a season ending injury. One of the goals for the Bengals this off-season is to shore up the offensive line.

Adding Scherff would be a big time move, which the Bengals typically don’t do. However, the perfect storm may be brewing in Cincinnati for the Bengals to be all in.

First of all, there were already rumblings about head coach Zac Taylor losing his job. The Bengals need to make big strides this year for Taylor’s job to be safe. If they can add Scherff, it will help.

Second, the AFC North is always a tough division, but there might be an opening for the Bengals to rise up in the division. The Steelers will look a lot different next season, the Ravens regressed in 2020 from 2019 and while Browns fans are hopeful for another playoff run, nothing is guaranteed. With the right couple pieces in free agency the Bengals could ascend quickly.

Thirdly, while this is not “The Reason” Scherff would sign with the Bengals, it definitely helps that their offensive coordinator is Brian Callahan, the son of Bill Callahan. The elder Callahan was Scherff’s offensive line coach in Washington from 2015 ”“ 2019.

Sometimes the best option is the simplest. While Washington has many questions to answer this off-season, resigning Scherff could put a perfect answer at offensive line.

The team made the playoffs last season with a 7 ”“ 9 record. With more consistency at quarterback, they can continue to be in the mix for future division titles. Add keeping Scherff to that mix and it helps solidify their future opportunities.

He can sign elsewhere and be an important piece for a future contender. But if he decides to stay in Washington he could reach legendary levels.

No matter what the Jets do at quarterback, adding to the offensive line is going to help. In the 2020 NFL Draft, the Jets selected tackle Mekhi Becton with the 11th pick. Becton had a good rookie year, but the line still needs help. Scherff would be that help.

If they believe Sam Darnold is their quarterback to move forward with, they can trade a few spots down with a quarterback needy team and pick up another player, perhaps tackle Penei Sewell. Adding Sewell and Scherff to Becton elevates the Jets line immensely.

It is always important to look at any connections between the player and the team. In 2015 and 2016 while Scherff played for Washington, his offensive coordinator was Sean McVay. McVay was a part of Mike Shanahan’s coaching staff in the early 2010’s. The New York Jets’ new offensive coordinator is Mike LaFleur who is also part of the Shanahan coaching tree.

The Seahawks need offensive line help. They are so badly in need; quarterback Russell Wilson discussed it in an interview on The Dan Patrick Show. While some have questioned whether Wilson’s tactics will help or not, there’s an old saying, “The squeaky wheel gets the oil.”

Currently, the Seahawks only have four offensive linemen under contract. While they need quantity, adding a player of Scherff’s caliber also gives them quality.

Playing in the same division as the Los Angeles Rams, and their All-Pro defensive tackle Aaron Donald, it is imperative that they get interior line help. In three games during the 2020 season between the Rams and Seahawks, Donald had three sacks, three tackles for loss and seven quarterback hits.

There is no guarantee that Scherff will be able to stop Donald, as there are never guarantees, but adding Scherff gives them a better chance of dealing with Donald. In fact last year the Rams played the Redskins and Donald had a four-sack game.

As mentioned earlier, it is hard to quantify the effect offensive linemen have on a team, but you know what’s wrong when you see it. The Ravens went into the 2020 season without guard Marshall Yanda and the offense was not as sharp as it was in 2019.

The Ravens offense is dependent on running the ball. In three seasons at quarterback, Lamar Jackson has rushed for 2,906 yards. In 2020 his yards per game went down about 13 yards per game from 2019.

Some will point to defenses stepping up. While others will bring up Yanda’s departure and a season ending injury to tackle Ronnie Stanley. While Stanley is expected to return, Yanda is gone and Scherff would be a great replacement.

Wherever Scherff lands there will be a shift in the balance of power.