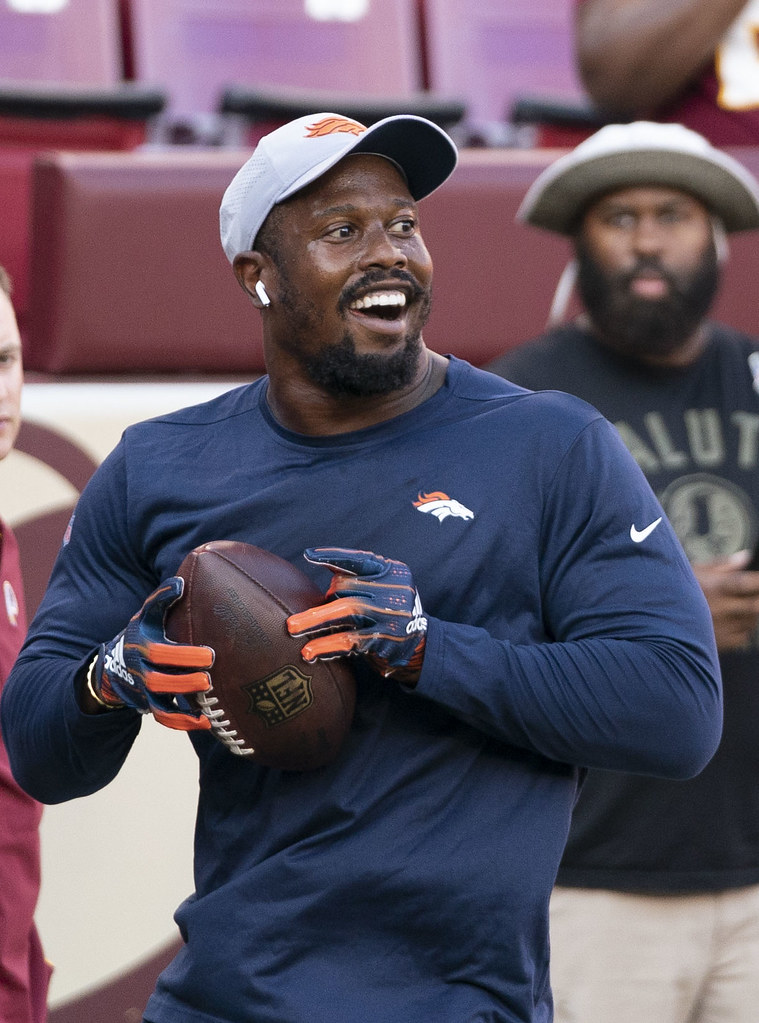 Where Will The Broncos Pass Rusher Land?

With recent rumors reporting that Von Miller, a longtime pass-rusher with the Denver Broncos, a three-time All-Pro and a Super Bowl MVP, suggesting that Miller is on his way out from Denver– a unicorn is about to hit free agency.

All 32 teams in the league spend their life in constant search of a player at Miller’s caliber. Even now, with the future Hall of Famer in his 30s, and coming off of an injury, an edge rusher with Miller’s resume should attract the attention of suitors across the NFL– and Miller should be able to take his pick.

But which teams make the most sense? Coaches and general managers are bound to put forth their best offer, but which teams are more likely to go all-in, and which teams offer the best fit for a veteran legend?

Any defense in the league could find a starting spot for Miller– but there are three teams that could potentially turn him into a cornerstone of their defensive front seven.

Is there a team in the NFL that could use the presence of a bonafide, veteran superstar edge rusher more than the men in two-toned blue?

The Tennessee Titans, bottom three in the league in quarterback pressure rate, hurries generated per dropback, and total sacks through the 2020 season, are a group that could use a spark in the pass-rush department.

Von Miller may not be the three-time All-Pro, Super Bowl MVP he was while at the peak of his powers– but if he can return to the form he showed in his last year of play back in 2019, he would be the Titans’ best edge rusher from day one.

Miller’s eight sacks through 15 games in 2019, the veteran’s lowest production since 2013, were head and shoulders above the sack total of anyone on the Tennessee roster in 2020, with third-year player Harold Landry coming the closest with 5.5.

Even coming off of an injury in his early 30s, Miller’s track record as a future Hall of Famer pass-rusher makes him too alluring of a player for a team without a clear-cut threat on the edge to not at least kick the tires on.

If Von Miller and the Denver Broncos, the team that took him second overall in the 2011 NFL Draft, were to part ways– how petty does the pash-rusher want to be?

That’s what matters most in this projection– because the fit is too good to be true.

The Raiders have been in search of a pass-rush specialist since the departure of Khalil Mack, a fellow All-Pro Canton-bound edge rusher, who took his 53 sacks through five seasons with the franchise to the Chicago Bears in 2019.

Since then, Las Vegas has been a team that manages to get into the backfield at an average rate, but struggles when it comes to actually bringing the quarterback down. Despite ranking 16th in pressure rate in 2020, and top five in quarterback hurry rate, the Raiders finished the 16-game season with just 21 sacks– the fourth lowest in the league. 2019 was similar. 11th in hurry rate, 25th in total sacks.

In contrast, Miller has been a sack artist since first setting foot on an NFL field– finishing with double-digit sacks in all but two of his nine seasons played. A master at brining the quarterback down, and a veteran presence for a budding star at the position in Maxx Crosby, Miller’s fit with the Raiders makes too much sense to not happy.

Provided he’s willing to play his former team twice a year, of course.

With the sudden emergence of Josh Allen, and the ascension of Stefon Diggs from a great player to one of the best wide receivers in the league, the Buffalo Bills have gone from a Super Bowl longshot to a team one or two players away from bringing home a Lombardi.

So let’s give them one more player.

Von Miller to the Buffalo Bills is far more than a luxury addition for the reigning AFC East champions. Despite a star-studded cast of defensive players, from Jordan Poyer and the All-Pro Tre White manning the secondary, to the emergent Tremaine Edmunds at linebacker, one area where the Bills could use a bit of help is bringing in an elite pass rusher.

Even while finishing 15th in the league in total sacks with 38, nobody on the Bills’ roster managed more than five sacks through 2020, and the team’s leader in tackles for loss, the veteran Mario Addison, managed seven. All this, despite the Buffalo defense blitzing at the eighth-highest rate in the league.

Give Von Miller to Head Coach Sean McDermott, a defensive-minded specialist, and Miller could thrive as he’s done for his entire career.