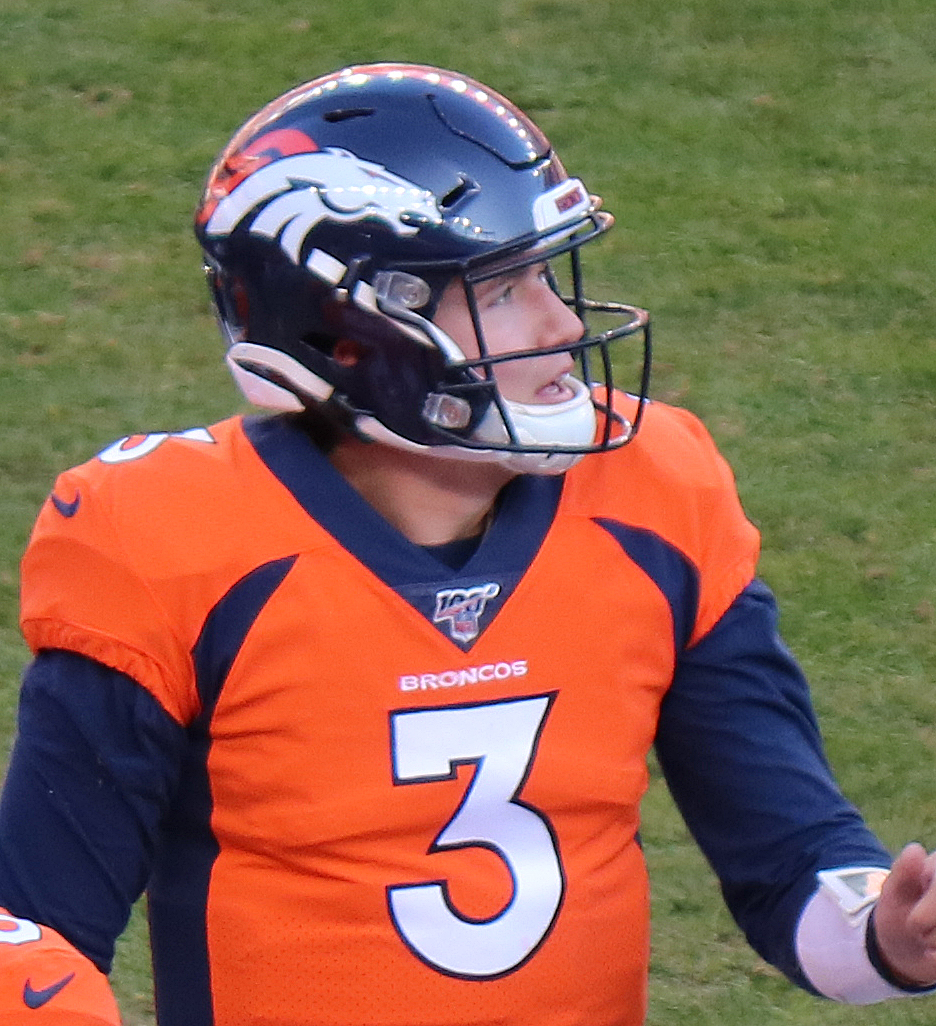 "File:Drew Lock.JPG" by Jeffrey Beall is licensed under CC BY 4.0

With numerous quarterbacks on the move this off-season, one name that has been mentioned is Denver Broncos quarterback Drew Lock. It seemed that Lock was in the shadow, but then reports came out that Denver nearly acquired a different QB with starting expectations.

As for Lock, Lock is heading into his third year in the NFL and we’ve witnessed some mixed results in his first two seasons. Looking at Lock’s 2020 season overall, his statistics were not great. He led the league with 15 interceptions and was sacked 19 times. But there was some good if you look a little deeper.

Here are a few positives that could be built upon:

The Broncos have contended that they do not plan to trade Lock. They feel that a full off-season with OC Pat Shurmur added to how well he played down the stretch could lead to Lock being their long-term answer at quarterback.

Of course, if the right situation would arise, they would be foolish to not look into it.

Let’s start by discussing the two situations where trading Lock makes sense. The first is if quarterbacks like Deshaun Watson or Russell Wilson become available for trade. The Broncos were reportedly trying to trade for Matthew Stafford, so it would make sense for them to be in on the top of the class quarterbacks available in trade.

The other situation where moving on from Lock makes sense for the Broncos would not occur until the NFL Draft in April. The Broncos currently have the ninth pick in the draft. If they feel they can make a trade to move up for a quarterback they covet, it would make sense to do so. It would then behoove the Broncos to trade Lock away.

One other point that needs to be brought up before discussing which teams might be interested is that his current salary is $813,674. With such a low salary, teams with bad cap situations can still be interested in Lock.

There has been some speculation that the Broncos are interested in acquiring quarterback Deshaun Watson. If they can pull off that move, they might be interested in making a deal similar to what the Detroit Lions  and Los Angeles Rams made when they traded quarterbacks Matthew Stafford for Jared Goff. A package of Lock, the #9 pick in the draft amongst other picks might be enticing for the Texans.

The Texans have so many needs, but mostly they need draft picks. If they trade Watson away, getting back a quarterback like Lock would allow them to fill in other needs and give Lock an opportunity to show that he can be a top of the league quarterback. If a trade like this is made, it is unrealistic to assume that Lock will ascend to Watson’s level but it would be a good move.

An additional positive for Lock if he’s traded to Houston is the opportunity to work with new Texans’ quarterback coach Pep Hamilton. Hamilton has worked with numerous quarterbacks like Chad Pennington, Andrew Luck and Justin Herbert. All of those quarterbacks had great seasons when they worked with Hamilton and it may be the best thing for Lock’s career to be teamed up with a coach like Hamilton.

If Lock does not play well for the Texans, at least he can buy them some time to get a quarterback to replace Watson. Additionally, the Texans would have the opportunity to fill the rest of the roster and build it up before drafting the “next big thing” at quarterback.

Hill has not proven himself to be much more than a “gadget” player. He started eight games in 2020 but in only four of those games did he play for at least 95% of the snaps. To assume that Hill can take over for a 12 – 4 team and lead them back to the playoffs is pretty naïve.

As for Winston, he played a total of 54 snaps in 2020 and when Brees went down with injury, head coach Sean Payton went with Hill over Winston. Prior to his season in New Orleans, Winston played in Tampa Bay and threw for over 5,000 yards and 33 touchdowns but also led the NFL with 30 interceptions.

Inserting Lock in New Orleans can keep the Saints as a contender. His big arm would be a welcome change from Brees’ recent inabilities to move the ball downfield. Additionally, the Saints are amongst the worst in salary cap space so adding Lock will be cost-effective as well.

Talking about teams with bad salary cap situations, the Steelers are in cap hell and have questions at quarterback. The team has hinted at not having quarterback Ben Roethlisberger return. For sure he will not return under his current salary and it might just be easier for the Steelers to move on than to restructure his contract.

That would leave only Mason Rudolph as a quarterback currently on the roster. They did sign former Washington quarterback Dwayne Haskins to a futures contract, but neither he nor Rudolph have done much to earn the confidence of the Steelers in 2021 and beyond.

Adding Lock to the mix of Rudolph and Haskins gives the Steelers three quarterbacks to work with and so far in their careers, Lock has been the best of the bunch.

The Steelers have a new offensive coordinator in Matt Canada and a new quarterbacks coach in Mike Sullivan. Neither have a great allegiance to Rudolph, so bringing in a player of Lock’s potential would be the right move to make.