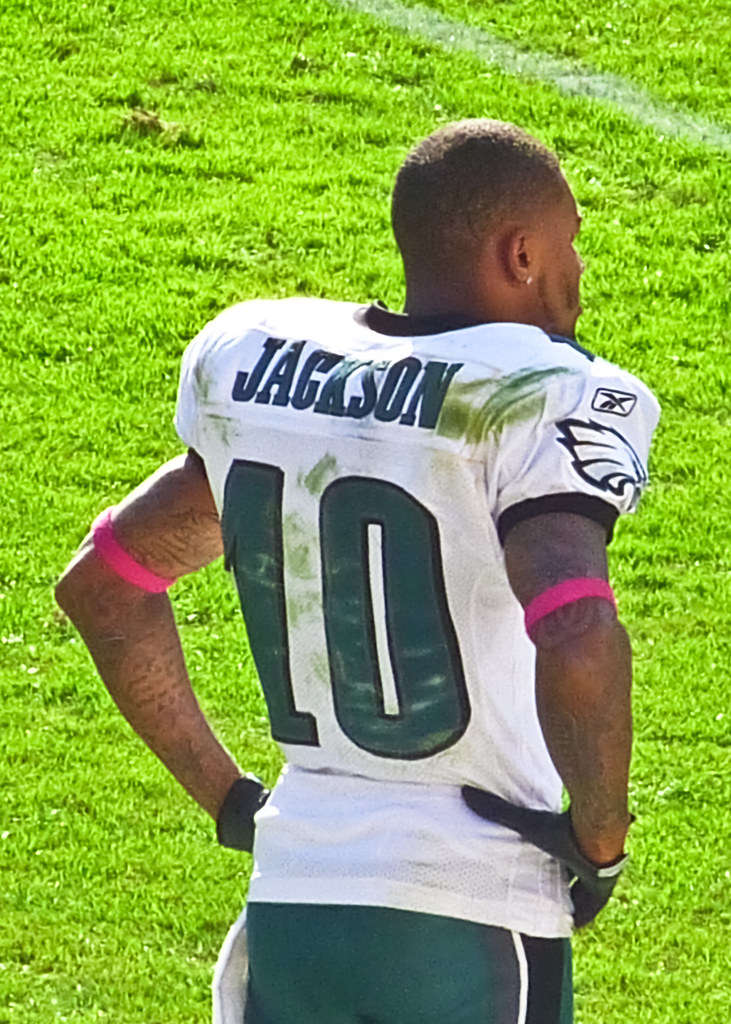 "DeSean Jackson in Washington, DC as an Eagle wearing Jersey number 10" by Matthew Straubmuller is licensed under CC BY 2.0

Desean Jackson, the Eagles playmaker that’s reminisced for being an elite deep threat, falling backward into the endzone on the goal-line, and muffing punt returns only to score a touchdown, is now no longer a Philadelphia Eagle. The eight-year–long native to Philly was just released in an effort by Owner Howie Roseman to create cap space amid a rebuilding direction — this move will create around $6 million in cap space, according to ESPN.

Jackson has experienced a sour taste of the injury bug over the last two seasons in an Eagles uniform — As Jackson has only touched the field in eight of the 32 regular-season games. Despite the negative stereotype that Jackson is too familiar to the medical tent, the former Eagle has only missed more than four games in a season twice prior to 2019.

Even though the 34-year-old has faced obstacles with staying on the field, Jackson has still been electric when lacing up the cleats to compete in between the white lines. Here’s is a sharper look at how productive Number 10 has been in 2020 (with a 28th ranked passing game) when healthy and performing on Sundays:

*According to Pro Football Reference

Jackson clearly was efficient for a deep threat wideout when he was healthy and didn’t show any significant signs of “washed up” or losing a step. Out of the five-game slate Jackson played, he had high end performances in Week 16 against Dallas with one catch for 81 yards and a receiving touchdown. In Week 2, Jackson was also leaned on heavily with six receptions (nine targets) for 64 receiving yards.

Now that the quality, veteran speed demon is a free agent for the third time in his career, where could his services be demanded? Jackson brings a unique component to offenses: blistering 4.3 speed. Jackson could very well fit in with a team that needs a No. two WR, or even one impressive wideout. Nonetheless, there could also be teams fielding two or three well-rounded WRs, but they want to prioritize equipping his lethal top-end speed in their respected WR rotation.

Now that there’s a base overview exonerated of Jackson’s potential, I’m going to voice the potential fits for Jackson’s talent no longer present in the city of brotherly love.

The Minnesota Vikings fit the bill of a squad boasting a quality offense, two very talented WRs in Adam Thielen and Justin Jefferson, yet the 7-9 NFC North team could supply more juice for Kirk Cousins to take his game to the next level. We all know WR Justin Jefferson was an Offensive Rookie of The Year candidate and Adam Thielen is arguably one of the best-undrafted players in the league, but Jackson could still fill in the gaps of Cousins’s infirm areas by providing his very unique craft.

QB Kirk Cousins clearly turned his early atrocious performances in September-October around with 23 passing touchdowns, three interceptions, and displayed five games over a 110 passer rating in the last nine games of the 2020 regular season. From an overall offense standpoint, Cousins managed to lead the MIN unit to 14th in passing YPG and sixth in passing touchdowns.

It may seem that Cousins led more than an admirable passing attack, but Jackson’s deep receiving ability could help Cousins where he underperforms — and Cousins did have significant flaws in his game. According to PlayerProfiler.com, Cousins was ranked 32nd in play-action completion %, 16 in deep-ball completion %, and a third quality WR in Jackson would even help Cousins in the red zone area where Captain Kirk was 27th in red zone completion %.

The Vikings could clearly use more explosion and talent in their aerial attack and Jackson could be a high-value pickup for Mike Zimmer’s crew.

The Houston Texans appear to be the most logical landing spot for Desean Jackson. And if Houston signs Jackson, Jackson will have the best QB he’s ever played with in Deshaun Watson (assuming he stays), along with a prominent void to fill after WR Kenny Stills and most likely WR Will Fuller are suiting up elsewhere.

Not only would the long-time Eagle be a cheaper option for Nick Caserio and the Texans than other wideouts on the market, but he could fulfill similar packages and assignments that the speed demon Will Fuller had in the offense. Jackson could very well turn back the clock and record his first 1,000-yard season since 2016.

An underlying factor with Houston being a strong candidate to land Jackson lies with Nick Caserio. When Caserio was with the Patriots, he and Bill Belichick routinely acquired troubled wideouts like Josh Gordan and Antonio Brown.

Jackson has some off-field concerns dating back to when he was first cut by the Eagles. It’s been reported by New Jersey Local News that Jackson has had gang connections, outside of the poor attitude reflected against coaches in the past. He’s also been a very derogative influence on social media, as he’s posted anti-semitic feed relating to the holocaust.

If Nick Caserio does indeed ink Jackson to a Texans uniform, it wouldn’t be the first time he’s given a WR with questionable character another opportunity.

I understand — many analysts and fans like to peg free agent weapons to Kyle Shanahan, or a figure like Sean Payton. It may seem too easy to project Jackson fitting into a well-engineered orchestra like such. Yet, the San Francisco destination makes too much sense for Jackson.

Kyle Shanahan has actually leaned heavily on the free agency pool at the WR position over the last couple of seasons. He’s brought in Emmanuel Sanders, Mohammad Sanu, and Travis Benjamin. Benjamin is the only acquisition left standing and he’s signed to be depth at this point.

The 49ers could use a consistent veteran WR among wideouts like Deebo Samuel and 2020 first round pick Brandon Aiyuk. Jackson could also allow the 49ers to not make WR a priority in the first two days of the draft, as they could focus on rebuilding the defensive unit.