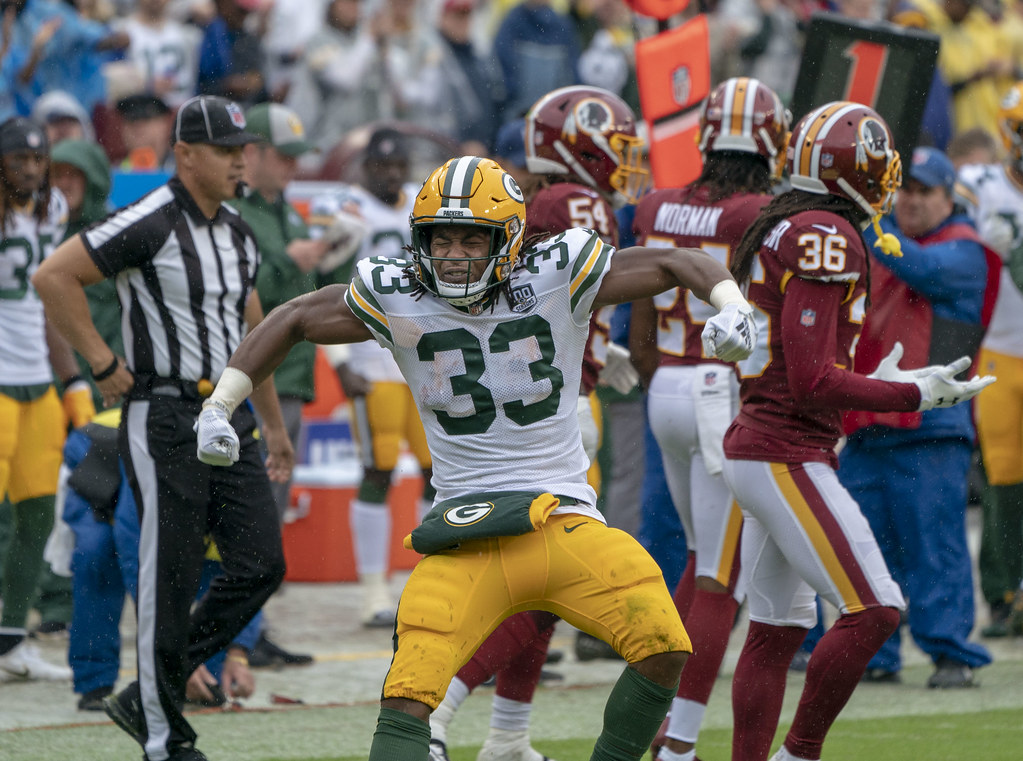 The Green Bay Packers have only yielded a running back to capture 1,000+ rushing yards in a single season for them twice since 2014. Who might that RB be? The bell cow that eclipsed these marks …. goes by the name of Aaron Jones.

Just when it seems that Green Bay has found their true RB complement to the 2020 MVP, Aaron Rodgers, the hourglass becomes empty. Aaron Jones is scheduled to be a free agent and it seems clear that he will cash in for another team. An ESPN expert has already projected him to land in Pittsburgh, while countless other reports have predicted where he could take his talents outside of Wisconsin.

It may seem like the Packers have a loaded backfield and potentially losing Aaron Jones shouldn’t cause alarm. Yet, not only is Aaron Jones a free agent, but all-purpose RB Jamaal Williams is a free agent for them, as well. The Packers will likely aim to replace at least one experienced RB at the position, but perhaps two.

The Packers will still have stud 2020 rookie RB AJ Dillon to likely fill in as the lead back or 1B to a potential new stud signee at the position. Nonetheless, Dillon isn’t the most prospering third-down RB and the Packers will need more explosion at the positon for Aaron Rodgers offense. With that being laid out, I’m doing untwine three potential RBs that could be seeing significant playing time in Aaron Rodgers’s huddle.

These three RBs named aren’t top of the Free Agency pool at the RB position and won’t be top dollar signees. I don’t believe the Packers would replace Jones/Williams by breaking the bank, especially with Dillon in the lineup.

Jerick McKinnon, also known as “Jet” for his blazing speed, is set to be a free agent in this 2021 free agency period. According to a story on NBC Sports, McKinnon hinted he would be leaving San Francisco with a post on his Instagram account, then he doubled down and reflected on his post by saying “said what I said”.

Some may see McKinnon has a head-scratching start in the fantasy lineup, but the 28-year-old that didn’t play in 2018 or 2019 can still offer fresh legs and highlight reels for potential fits around the league. Jet didn’t unveil consistent gashing runs or prominent all-around success after the 17-week slate, but he did show enough glimpse of his old self to allow the right team to get a bargain out of the player coming off a one year, 1.16 million dollar deal.

Here’s a more in-depth how McKinnon’s notable stats in 2020:

Jet’s speed on the perimeter could be a fine complement to workhorse AJ Dillon in Matt LaFleur’s attack. Rodgers could do wonders with a running back that can wreak havoc underneath defenses and McKinnon could be an essential factor in the passing game against front sevens like the Buccaneers and Saints who flex elite coverage linebackers.

Green Bay would the best spot for Le’Veon Bell to redeem his once elite presence among the league while chasing a Lombardi Trophy. After failing to win in February in Tampa Bay with Patrick Mahomes, Bell could travel up north to play with A-Rod in the frigid NFC North.

Bell signed a one year – million dollar deal with the Chiefs after getting cut from the New York Jets. It’s been reported by Arrowhead Addict that Bell is likely a one and done with KC Chiefs. He’s also been predicted to sign with the Las Vegas Raiders by Maurice Moton of Bleacher Report.

Bell ousted modest numbers with the Chiefs and often showed his nuisance to defenses with his elusive ability in the open field. Bell averaged 4.0 YPC with the Chiefs, along with 7.6 YPR (Yards Per Reception) in Andy Reid’s orchestra.

Bell would fit the bill as another all-purpose back that could be an exceptional value acquisition for Green Bay — as his main reason for getting cut from the Jets was his hefty price tag (combined with less adequate production for his pay), just prior to a top-notch organization in the Chiefs giving him an opportunity. He will likely have to play for less than his worth in 2021 again, so there may not be a better place to play than in Lambeau Field.

Burkhead has shown to be like fine wine in improving his craft since entering the league with Cincinnati in 2013. Even though Burkhead was primed to be ousting a career season in 2020, the veteran RB seems to be the odd man out in Belichick’s RB rotation.

The Patriots showcase the young 2020 rookie Damien Harris, former first-rounder Sony Michel, and James White is a free agent — who’s arguably the most polished RB in a Patriots uniform. Given the depth at the position, prioritizing White, and age of Burkhead, it should seem there’s a high probability of Burkhead not returning.

Aaron Rodgers could has a quality “veteran” receving back in his arsenal in Burkhead, along with the adequate veteran prescense in the RB group.