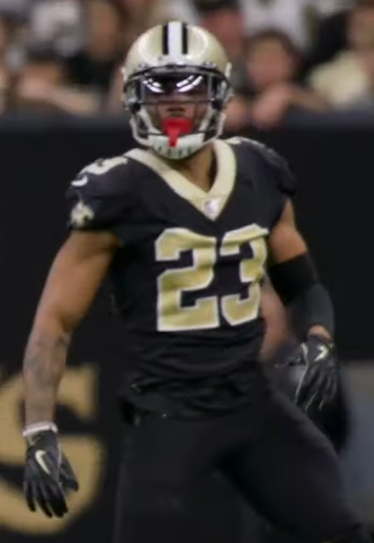 "File:Marshon Lattimore.png" by Atlanta Falcons is licensed under CC BY-SA 4.0

Will Saints CB Marshon Lattimore be a Saint Long Term?

The New Orleans Saints are entering a 2021 offseason with lots of question marks. Saints are not only expecting Drew Brees to retire, but they will find themselves deep in with the money sharks.

As widely enunciated, the Saints are dead last in cap space. The team will likely lose star pass rusher Trey Hendrickson in free agency, defensive tackle Sheldon Rankins, linebacker Kwon Alexander, plus they could make some transactions to create cap space. One of these notorious Sean Payton blockbuster trades could be shipping talented, inconsistent Marshon Lattimore who’s contract expires in 2022.

Sean Payton has traded Jimmy Graham, Brandin Cooks, and he’s made overhauls of massive veteran cuts on defense in the past.

In an article by “Sports Illustrated”, Albert Breer explores the opportunity for the Jaguars to pull off a trade for the CB Lattimore. Breer states that the Saints could part ways with Saints No. one CB given their tight cap situation and the likelihood that Lattimore will seek a contract extension this offseason. Breer also states that Jaguars head coach Urban Meyer coached Lattimore at Ohio State University.

It’s unclear if the Jaguars have serious interest, but they portray as a realistic landing spot if the Saints fielded offers for Lattimore. Lattimore could get interest from many teams across the league given the value of the CB position and his combination of age and talent.

In this piece, I’m going to untwine strong candidates to land Lattimore. If the Saints did in fact try to create more cap space by pardoning a star, there wouldn’t be a stronger candidate than the Ohio State CB displaying a soon-to-be massive contract and inconsistent play beneath it.

The Indianapolis Colts just pulled off one blockbuster trade, why not make it two? The Colts pose an elite defense and now they just might have obtained a rejuvenated QB in Carson Wentz. They are quietly putting together a Super Bowl contending roster.

There are some flaws in the Colts — particularly at CB. Xavier Rhodes is a free agent and it seems like the 30 year old will cash in for a team elsewhere. Lattimore could fill in the shoes of Rhodes and line up across from CB Kenny Moore (four ints in 2020).

The Colts could also afford Marshon Lattimore if they chose to bring him in. According to NBC Sports, the Colts are still near the top in cap space after trading for Wentz. They are sitting at fourth in cap space even after obtaining Wentz.

Colts also boast a first-round pick that isn’t too high to cough up, or too low for the Saints to scuff at — 21st overall. Lattimore would be a significant upgrade over a fourth/fifth-ranked CB in the draft at that position for Indianapolis, while the Saints could use the draft stock to have multiple first-rounders and trade up for a QB or draft a LB and CB in round one.

The New York Jets could look to make a lot of moves entering the 2021 offseason. Looking to fill the needs of the secondary, has to be one of the highest priorities for Robert Saleh.

The Jets will have a few key free agents on the backend of their defense. S Marcus Maye and CB Brian Poole may be out of the big apple in the near future, as their contracts expire this offseason.

Luckily, the Jets are towards the top of the league in cap space ( 67 million/second in the league) and they could/should look to make a splash move at the CB position. If they decide to draft Justin Fields or Zach Wilson, it will be imperative that their pass defense is competitive — especially when a rookie QB will likely have his growing pains.

Not only do the Jets have the firepower with nine draft selections to make a move for Lattimore, but they could boast even more capital to get creative with their options. If the Saints received a few early to mid-round draft picks, it may be wise for the Saints to trust their draft success and send the near hefty paid CB out the door.

The Arizona Cardinals should in strong contention to the best team that didn’t make the playoff gauntlet in 2021. Their electric offense was displayed last year with new WR DeAndre Hopkins from the Houston Texans.

Unfortunately, the Cardinals were a step short of reaching the playoffs and being the second NFC West wildcard squad in the dance. The offense sputtered out towards the end of the season, but the defense couldn’t point any fingers.

The Cardinals pass defense gave up three passing touchdowns to CJ Beatheard in Week 16 and the Cardinals defensive unit allowed John Wolford to compile 288 total yards in Week 17. The defense was crumbling when it mattered the most — not to mention the horrid competition at QB performed against.

It won’t be easy for AZ to bounce back on the defensive side of the ball looking ahead. Long time legend Patrick Peterson is due to be a free agent. Even if the Cardinals keep “PP” around, the 30 year old has shown signs of slowing down and it doesn’t seem like he has a long window in a Cardinals uniform.

It could be a clever move to obtain a younger and more productive player at the CB position — Especially when the Cardinals are trying to get over the hump. Cardinals could deal the 16th pick in this year’s draft for Lattimore and potentially take a huge step in the right direction on defense.