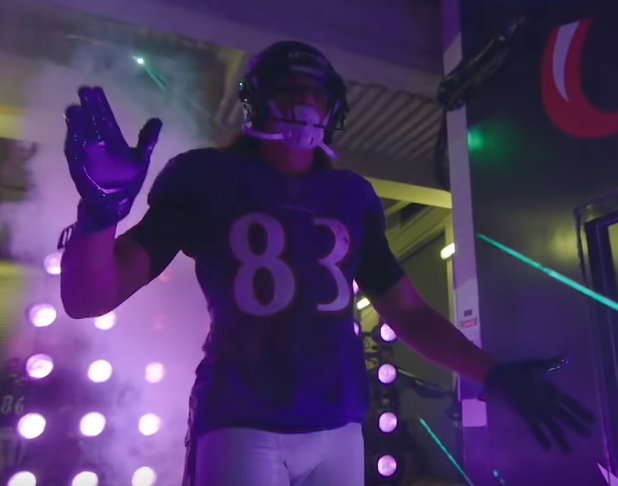 "File:Willie Snead.png" by Tennessee Titans is licensed under CC BY 3.0

Where Will Willie Snead Play in 2021?

The Baltimore Ravens enter a 2021 offseason where supplying Lamar Jackson with weapons is the highest priority. One of the Ravens most reliable targets for Jackson – Willie Snead, may not be part of the solution moving forward. Snead is due to be a free agent and it seems that Baltimore and the veteran WR may not envision a future together in this offseason.

Snead had 432 receiving yards, which was ranked third on the team. His presence has been felt, as he’s been a third-down magnet for the Ravens MVP QB in his career.

Even though Snead has often been the jell in the offense, there seems to be a chance that he part ways with the Ravens organization. According to CBS Fantasy, Snead said he is unsure if he will resign with the Ravens franchise this offseason.

It would make sense for the Ravens to seek an upgrade over Snead with a more explosive WR given how Snead hasn’t posted top-end success in his Ravens tenure (never exceeded 651 yards or 5 receiving touchdowns in a single season). Devin Duvernay was also a third-round pick at WR for Baltimore last year and they may not see a clear discrepancy between the two players, where they feel the need to resign Snead.

Will Baltimore decide to keep Snead’s experience and fit in the scheme in Baltimore? Or will Snead find a stronger suit elsewhere around the league? I’m going to unravel the potential destinations for the undrafted WR out of Ball State.

The once Saints unsung hero at WR has still failed to eclipse 1,000 receiving yards. Despite Drew Brees expected to retire, I believe that Snead would feel the most comfortable back in the Saints offense orchestrated by Sean Payton.

Snead may opt to take a prove-it deal next year, so it would make sense to do so with the Saints. Michael Thomas will be taking over No. one WR duties, then Emmanuel Sanders is the No. two face ( who may be a cap casualty), but they could use competition with Tre’Quan Smith for the No. three spot.

Emmanuel Sanders and Michael Thomas have been very familiar with the injury bug as of late (missed 11 combined games in 2021). It could be wise to invest in a familiar WR option that could come cheap, opposed to drafting a WR this year.

I believe that there are two objectives for Snead when choosing a team: winning and playing time. This is exemplified in his playing time in New Orleans and decision to play in Baltimore afterwards.

The New England Patriots could give an opportunity to see significant playing time right off the bat. WR Damiere Byrd will be a free agent and it appears he will take a modest contract elsewhere. The 34-year-old WR Julian Edelman starting on the other side is coming off a season where he played six games due to injury.

The future is very murky at WR for Belichick’s crew. It doesn’t seem like Belichick would break the bank for a WR in free agency given their QB situation and need to retool their defense. So it would be expected that the Patriots genius digs for value wideouts in the free agency pool. And Snead could be on top of Belichick’s wishlist.

Snead fits the mold of an Edelman, Welker, like player in Josh McDaniels methodical, short passing game. He also has the winning DNA from being coached under Sean Payton and John Harbaugh. And why did I mention “winning” in the first paragraph of this section? Well, who’s going to bet against Belichick two years in a row.

If the Patriots don’t make a splash move at WR via trade or FA (as they shouldn’t), fully expect the Patriots to be a team that has a stronger interest in Snead throughout February and March.

The Buffalo Bills could be atop Willie Snead’s targets on teams to sign with this offseason. And the Bills should look to add a veteran wideout in free agency. WR Andre Roberts is a free agent for Buffalo and WR John Brown could be a cap casualty.

The last thing that Bills mafia wants is Josh Allen to regress because they fail to supply a third WR, or simply more depth at the position. Snead could be the perfect third weapon for Allen.

Buffalo could be the “dream” fit for Willie Snead. Snead’s strength is route running and being consistent for a WR3 in the red zone, along with having a knack to getting open underneath defenses.

Who would have expected Cole Beasley to be second-team All-Pro this past year? The answer is zero. The two undrafted WRs — Beasley and Snead, pose very similar skillsets in being shifty, undersized slot WRs, that outwork their opponents to be productive.