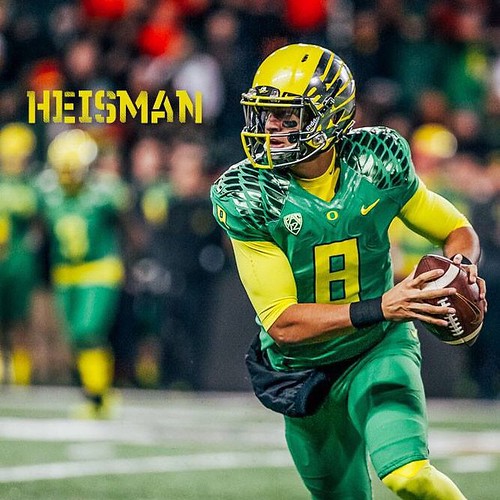 Which Teams Need The Former Duck The Most?

Once upon a time, Marcus Mariota was drafted by the Tennessee Titans with the second pick in the 2015 draft. He joined an organization several years removed from their glory days and searching for a new identity. He went on to lead his team to a playoff appearance in his third season with Tennessee. Along the way, he took the team from a 3-13 record in his first year, to three straight seasons over the .500 mark. He showed his mobility and playmaking ability on the field and helped put the Titans back in the conversation of one of the better teams in the league.

It all came to an end unceremoniously in the 2019 season when Ryan Tannehill replaced the injured Mariota and held on to the job for the rest of the year. That offseason, the Titans offered Tannehill the invitation to stay sending Mariota to find his own way. He did that by signing with the Las Vegas Raiders to back up Derek Carr. He only appeared in a single game in his first year of the two year contract he signed with the Raiders.

There are plenty of teams that are in need of a starting quarterback heading into the 2021 season. It’s arguable that Mariota’s best days are actually not behind him and that bad luck has him playing back up to an ironman. If this is true, there should be several phone calls being made to secure his services. Here are four possible trading partners that would benefit from the former Oregon standout.

The 2021 season in New England will not begin with Cam Newton under center. That being the case, the need for his replacement should be a priority for the Patriots. Mariota’s has a valid case to be that guy. Big named potentials have been taken off the board in past weeks. Names like Carson Wentz who is now an Indianapolis Colt. Jared Goff and Matthew Stafford pulled the old switcheroo and will permanently swap jerseys next season. There do remain though some big fish to try and land like Deshaun Watson. In all reality, the Pats don’t have enough to offer Houston for that to happen.

So what that leaves is a collection of names a la Dak Prescott, Mitchell Trubisky, and Ryan Fitzpatrick among others. Of these, none seem likely to raise the antenna much as a potential leader in New England. This means if Bill Belichick wants a new face under center next year, his best bet is to make a deal. Several people seem to think that bringing back Jimmy Garoppolo makes sense. As touching as it would be to bring the former Tom Brady backup home, he carries with him a hefty price tag. The Patriots would need to take on his $24 million contract to suit him up in their colors next season. Mariota on the other hand, would only require a little over $10 million to put on the red, white, and blue.

In the short term memory syndrome that has befallen the NFL, some might have forgotten that all was not that bad in Tennessee in the Mariota era. He logged two seasons with more than 3,000 passing yards and made a deep playoff run in the 2017 season. More importantly, he helped turn around an otherwise slumping franchise. Up to his arrival, the Titans finished under .500 in four of the last five seasons. He’s still only 28 and given the chance could offer the Patriots a solid foundation from which to begin their rebuild.

The question becomes what do the Raiders get for Mariota? In this instance, New England is without a third-round pick which seems to be the agreement on market price. That may change though as the Patriots are in line for a compensatory pick for Tom Brady which could come in the third round. It could be that the Pats part ways with their fourth-round pick and a defensive player of their choice. The Raiders struggled in many aspects defensively last season, especially on the defensive line. Whatever the cost, if Belichick wants Mariota bad enough, he’s sure to make it happen.

It does not appear as if Drew Lock is the future in Colorado. The Broncos second-round pick of the 2019 draft hasn’t been all John Elway had hoped he’d be. It probably wasn’t realistic to expect a rookie to have an immediate impact on a franchise coming off of back-to-back sub .500 seasons. That said, Lock had difficulty hitting a stride in the season and a half he held the reigns. This ineffectiveness could open the door for the arrival of Mariota. He certainly provides the level of veteran leadership to the Mile High City it’s been lacking since the departure of Peyton Manning.

No matter which quarterback is taking snaps for the Broncos next season, work will need to be done around him for him to succeed. If it does turn out to be Mariota, he’ll be throwing behind the 8th worst offensive line in the league. He will have some stability though in the running game with Melvin Gordon as the anchor. Gordon finished only 14 yards shy of 1,000 rushing yards last season. They will have to find at least one more explosive receiver. If they can support him Mariota could be the solution to Denver’s quarterback problem.

This is no knock on Minshew Mania. Gardner Minshew has stolen many hearts in Jacksonville. It also blinded a lot of eyes as a result. His epic beard hides his overall ineffectiveness over the last two seasons. Maybe more of it has to do with his situation than talent, but the fact remains that it is not working out for either party anymore. So much so in fact, that with the first pick in the draft, they will look to crown their next gunslinger by presumably taking Trevor Lawrence off the board.

But here is a logic train that is lost in today’s impatient, “win now” league: talent development. You can argue that only game action seasons these rookies and that sitting does nothing good for them. While there are exceptions, what we see more than often is these young, otherwise talented quarterbacks, flame out fast. Too much pressure is put on them to save floundering teams with the skeleton of the poorly performing team surrounding them. In the end, it’s not fair to the players, the management, or the fans.

To that point, renting Marcus Mariota for a season via trade will give Lawrence a decent mentor who has experience turning a sub .500 team into playoff contenders. It will also give Jacksonville a decent chance to “win now.” There’s plenty of young talented Jaguars to help him along the way. Breakout rookie James Robinson will be behind him in the backfield. He’ll also benefit from three speedy young wideouts in D.J. Chark, Keelan Cole, and Laviska Shenault Jr. This will be the most controversial of landing spots, but one that makes sense.

Whatever the question was in Chicago last season. Nick Foles was not the answer. He struggled for the better part of his nine starts with the Bears. Eventually, he lost his spot to the incumbent Chicago quarterback Mitch Trubisky. While the team managed to stumble it’s way into a second place finish in the NFC North and a playoff spot, it wasn’t pretty. They seem to be a quarterback away from being able to make a deeper run at the title.

Bringing Mariota into the fold would link him to Allen Robinson and David Montgomery. Both would up his stock. Montgomery would be a nice buffer for his new quarterback as Mariota is used to having a 1,000-yard caliber running back behind him. Chicago has a 20th pick in the third round to offer up as collateral. This would be ideal supposing they allow Trubisky to hit the free agent market. Foles will either be relegated to back up status as a result, or Chicago will try to shop him around. Either way, Chicago should look into upgrading their quarterback situation.