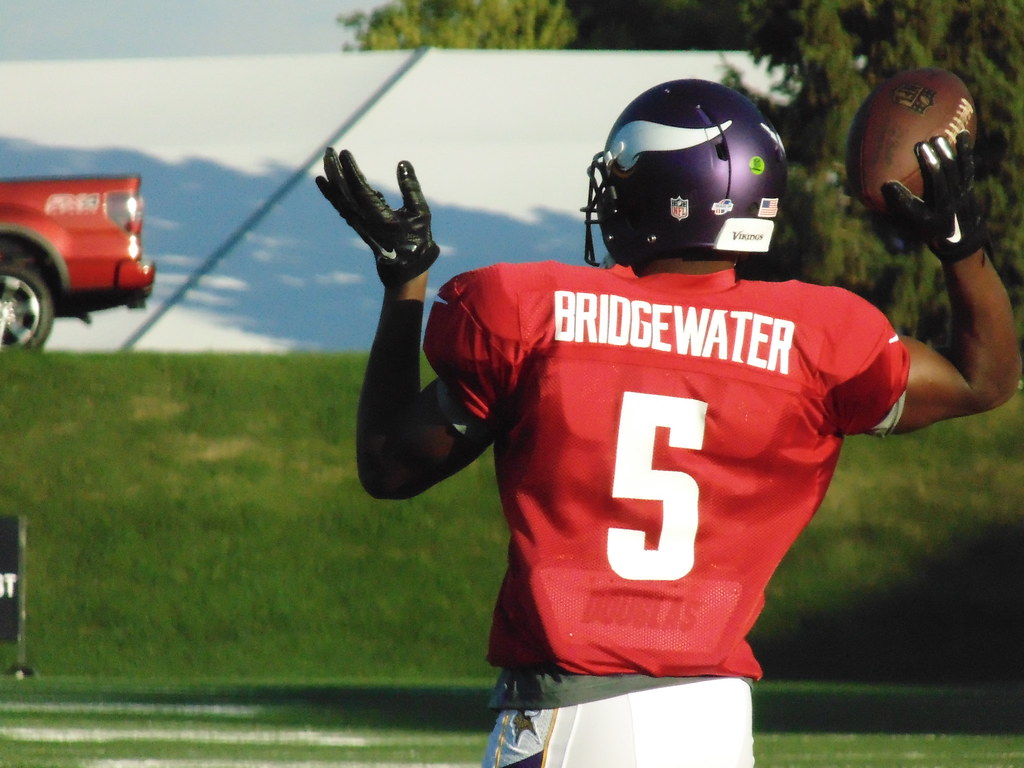 "Teddy Bridgewater" by Kyle Engman is licensed under CC BY 2.0

Is Bridgewater a starter or a bridge for the future?

The NFL is a cutthroat business. Players’ futures are largely based on what have you done for me lately and what can you do for me now. After receiving a three-year, $63 million deal with a $15 million signing bonus and $33 million guaranteed deal last offseason, Teddy Bridgewater is likely on his way out of Carolina.

Bridgewater didn’t do enough last season. Bridgewater had a record of 4-11 as a starter with 15 touchdowns and 11 interceptions while completing 69.1% of passes for 3733 yards. Inconsistent play is what stands out from Bridgewater’s 2020 season. His inability to convert opportunities late in games led to a 0-8 record in game-winning drives. Clearly, missing star running back Christian McCaffrey made a huge difference in the offense. However, Bridgewaters’ play in 2020 has led the Panthers to go a different direction in 2021.

The Panthers currently hold the eighth overall pick in the upcoming draft. They can get their future signal caller via the draft or look to trade for their future quarterback. Whatever trade they make they’ll likely look to send Teddy Bridgewater in the package. Currently, they are linked in discussions for Deshaun Watson. It would likely take a ransom for this to happen. However, there are many NFL teams with less quality players than Watson at quarterback currently that should look to bring in the former first round pick, Teddy Bridgewater.

After missing out on Wentz the Bears quarterback search continues. The Bears like the Panthers are in the Watson sweepstakes however don’t have the best draft capital with pick 20 in this year’s upcoming NFL draft.

The Bears trading for Bridgewater has various concerns. Is it an upgrade over Mitch Trubisky? Does absorbing the contract fit with their plan?

Teddy Bridgewater was a free agent the Bears considered bringing in last season. Matt Nagy said previously that he had liked Bridgewater in evaluations from the 2014 NFL draft, and previous appearances while playing against him. Nagys concerns with Trubisky have been documented as of late and the relationship with Trubisky and the Bears isn’t great.

When comparing the Trubisky and Bridgewater, Trubisky had a better passer rating with 93.5 to Bridgewaters 92.1. Trubisky threw a touchdown on 5.4% of his passes while Bridgwaters’ rate was 3%. Bridgewater did have a lower interception rate and his total yards passing last year would have been good for third-most all-time in a single season in Bears history. I would give the edge in athleticism to Trubisky as well. Trubisky can efficiently create with his legs and has a stronger arm. So why trade?

Trading for Bridgewater would force the Bears to eat the $10 million in guaranteed money. This also would be in the way of possibly resigning Allen Robinson. Spotrac currently has Trubiksys market value at approximately $8 million. I don’t think the Bears want to bring back Trubisky unless there are no other options.

So why trade for Bridgewater? The Bears currently have Nick Foles as the starting quarterback on their roster. Bridgewater has shown the capability to be much better than Foles. The Bears front office and coach do have interest in Bridgewater from last year’s free agency. The fans would love to see anyone but Mitchell Trubisky taking snaps at quarterback. Most importantly the trade for Bridgewater wouldn’t cost a fortune. Likely two picks in the second or third round can get this trade done as the Panthers are looking to get rid of Bridgewater.

Acquiring Bridgewater doesn’t limit the Bears to solely he and Foles next season. They can draft a quarterback they want still at 20 if available. Bridgewater would serve as a veteran leader for the team and could mentor a young quarterback. If starting for the Bears, Bridgewater can take care of the ball and win games with a solid defense that the Bears do have as well.

The Minnesota Vikings currently have starting quarterback Kirk Cousins under contract through 2022. Recently there have been whispers the Vikings are open to moving on from Cousins. If so they would have a void at quarterback.

A likely destination for the Viking to trade Cousins to is San Francisco. The Vikings doing this frees up a lot of tied money with Cousins however, leaves them empty at the quarterback position if Garoppolo or Watson don’t come in return.

The lack of depth behind Cousins can be improved in trade for Teddy Bridgewater. With Cousins still on the roster, Bridgewater is an upgrade over Sean Mannion who has never attempted an NFL pass. If they acquire Bridgewater they may feel more at ease to get rid of Cousins and the money tied up with him via trade.

The point of the trade is to upgrade your team. I think trading for Bridgewater does so. He would be a very good backup quarterback behind Cousins in 2021. This upcoming year is an important one for the Vikings and setting up as a possibility to return to the playoffs with an explosive offense and improved defense when their veterans are healthy.

A playoff appearance for the Football Team in 2020 is something to build on. One spot the team can improve at is the quarterback. With Kyle Allen and Taylor Heinicke projected to battle at camp for the starting spot in 2021 will the front office look to bring in another player to earn the job?

With the 19th overall pick, the elite quarterback options will likely be off the board. They enter the 2021 season with over $40 million in cap space and will look to make moves to improve.

Playing in a weak NFC east the Football Team has the defense to get back to the playoffs in 2021. Bridgewater would serve as a viable quarterback option who can protect the ball similar to Alex Smith and be a bridge until they find their answer at quarterback.

After starting four different players at quarterback last season the team is looking for some consistency. Outside of the freak accident Teddy has been reliable and plays every week. Bringing in Teddy would provide a solid option for the defending NFC East champs and allow them an opportunity to win a playoff game and improve on their solid 2020 season.

Denver Broncos- Can compete with Lock. Lock may be on limited time.

New England Patriots- Cam Newton likely to not return. Looking for a veteran quarterback for now.

Pittsburgh Steelers- Is Ben done? Bridgewater can be a bridge quarterback.

Overall I see Teddy Bridgewater as a low ceiling high floor player. The quarterback carousel in the NFL is in full swing and until more pieces are situated Bridgewaters’ status will be in flux. It doesn’t make a ton of sense for teams to trade for Bridgewater given his bad contract. I think any team would be helping Carolina in trading for him. It’s likely the Panthers do find a trade partner but it’s also possible they end up cutting Bridgewater a year after signing him. Bridgewater will have a job in the NFL in the next year, as a starter options maybe limited but as a backup there are many places he can land.