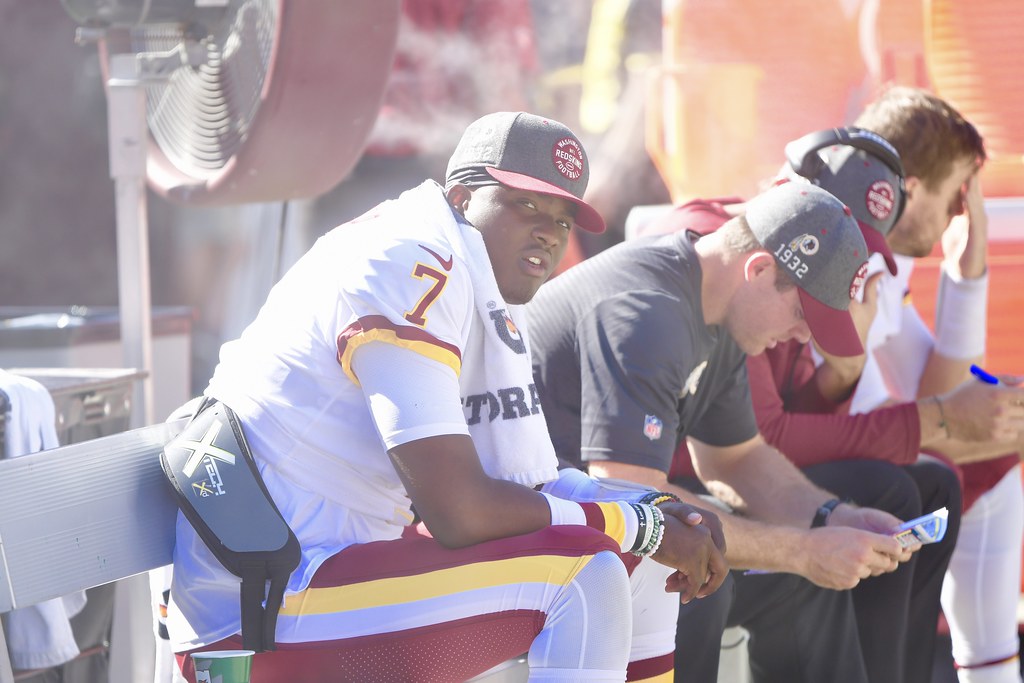 "Dwayne Haskins" by All-Pro Reels is licensed under CC BY-SA 2.0

A big part in being a successful dynasty owner, is to capitalize on value while you still have a chance. By a player’s third year, their talent is well known, but their opportunity and trend direction are what needs to be monitored. Some league mates may still be holding on to last year’s production, and ignorant to the fact that an off-season means there will be many moving pieces (free agency), and newcomers (draft). Below is a list of five players that should be considered to sell before they’re faded on their team’s depth chart, and in the fantasy world.

Gaskin is the most clear-cut player to make this list. After finishing as the RB28 in only 10 games, or as the RB12 in PPR fantasy points per game, many fantasy managers may want to buy-in to what he was able to accomplish. Yes, Gaskin overtook both Matt Breida and Jordan Howard, whom of which the Dolphins acquired last off-season. On another note, Ahmed was RB7 in PPR fantasy points per game in the three games he started. Gaskin was drafted as the 20th pick of the seventh round, and Ahmed was an undrafted free agent. Not to take anything away from these two backs, who had great seasons, but neither are great NFL RBs, or capable of carrying a workhorse role, of which the Dolphins showed to use all season last year. Gaskin and Ahmed were able to produce as a representation of this offense, I do not believe the Dolphins were fortunate enough to “hit” on both an undrafted rookie and a late seventh round pick.

So why sell?  The Dolphins currently hold roughly $30 million in cap space (10th most). They also hold 4 draft picks in the top 50. With few holes left to fill on this roster, why not get a significant upgrade at RB? Guys like Aaron Jones (now in negotiation with the Dolphins), Chris Carson, Travis Etienne, and Najee Harris will all be attainable and would be huge upgrades, it simply depends what they want to spend on them. Either find the Aaron Jones owner, and use the hand cuff selling option, or find that league mate who does not pay attention during the offseason and slip in a quick deal before it’s too late!

Drew Lock is not what DEN hoped he would be. The Broncos have been doing everything in their power to replace/challenge him this off season. To begin, Lock was not that great of a college QB, as his best college completion % was 63%…. That is unflattering, and when going back to watch his college film, he failed to do anything successful when being pressured. He needs a clean pocket to be borderline competent. If he does start 16 games this year, it will be his last 16-game season of his career. Get rid of him before his value plummets even more.

Where did Lock land across QB categories?

His per game average stats have decreased from 2019 to 2020… He will not complete the “Josh Allen transformation”, which was generational. It’s time to give up on Lock before your league mates do. Find the QB desperate manager in your fantasy league and cash in.

Montgomery finished the season as the PPR-scoring RB4 (STD-scoring RB6) while missing 1 game. This was, and forever will be, by far his best fantasy finish. Montgomery thrives on opportunity, which he had plenty of when Tarik Cohen left the season with an ACL injury in week 3. Tarik Cohen was extended by the bears this season to become the 10th highest paid running back in the NFL… yes, you read that correctly. Not that the money necessarily dictates who gets the ball, and Montgomery will continue to be the first and second down back, but when you a pay a pass-catching, third down specialist, you are going to use them in those situations, which decreases Montgomery’s overall opportunity. What do the numbers say?

This is not an anti-Montgomery article; this is a capitalize on value opportunity. He is built to withstand a heavy workload, but he is:

Montgomery is not a bad running back by any means, and really capitalized on one of the best RB schedules in history of fantasy, but with Cohen coming back, cutting into Montgomery’s workload, he will revert back to a bottom end RB2 with a moderate floor and small ceiling. My recommendation would be to use him in a package to upgrade at running back, or if you’re lucky enough to swap him 1 for 1 for a better RB, or a younger, stud WR (if that is what your team needs)

He goes by “Hollywood”, and yes that was probably a great name for him growing up, when he dominated his peers, but now that he’s in the big leagues, he’s not the show anymore. He is not an NFL team WR1, and there is just not big enough pie to go around in Baltimore. His target share did increase from 16% to 24.6%, but that was only enough to give him 29 more targets to give him 100 on the season in 2020. Lamar Jackson also came back to earth after his MVP season, which led to a similar passing attempt pace, but less TDs, more INTs, and slightly less yards per game.

Brown may have finished as the WR36, but I believe it’s time to cash out, before his value drops even further. He will be a great NFL WR2, but we may have just seen his best season in term of fantasy output, at least while he’s a Raven. Once sold, a few slaps to the face may occur, as he will have his big games, but they will be far and few between, as he and this passing offense, is so inconsistent, that he will hurt your team more than help it when in a starting lineup.

Dwayne Haskins was both a one-year wonder in college, and in fantasy. Many people believe that Haskins still has the opportunity to follow in Roethlisberger footsteps and take center of the Steelers’ QB job. Why was Haskins so good in his 2018/19 season with Ohio State? He had multiple NFL talents: Terry McLaurin (WR), J.K Dobbins (RB), Parris Campbell (WR), Austin Mack (WR), Mike Weber (RB), K.J Hill (WR). Five NFL skill position players on a college team is enough to make any college QB great, especially when in a great football program.

If he takes reigns of the Steelers, he will have Diontae Johnson and Chase Claypool, and potentially a stud RB, but he is now in the NFL, where throwing windows are smaller, and processing speeds must be faster. A lot of people blamed Washington’s offensive line to give an excuse to hold onto hope for Haskins, but playerprofiler.com ranked Haskin’s protection rate 4th best among NFL QBs in 2020.

If we put all the numbers together, Haskins played just over 6 games of

It’s simple, Haskins is not a good passer, overrated runner, and has struggled with off-field issues. A perfect recipe for an early exit out of the league. If there is any time to sell him, it is now. First target the Ben Roethlisberger owner, again using a handcuff selling point approach to convince this owner to monopolize the Steelers QB situation. Haskins is hanging on to his 1st round NFL draft pick value, and a portion of the fantasy world is doing the same.

When brainstorming to do this article, the first name that came to mind was Mecole Hardman. He has been a circulating “sell” name in the fantasy community since the tail-end of the NFL season and playoffs, but I believe Hardman is the biggest hold in fantasy at the moment. Third-year in the NFL is a big “make it, or break it” year, as after this season, players typically only have one season left on their rookie deal, and their respective teams will begin the process of fading and replacing them in the depth chart. The NFL is a business, just because they used value in the draft to acquire these players, does not mean they are loyal to the end of their contract.