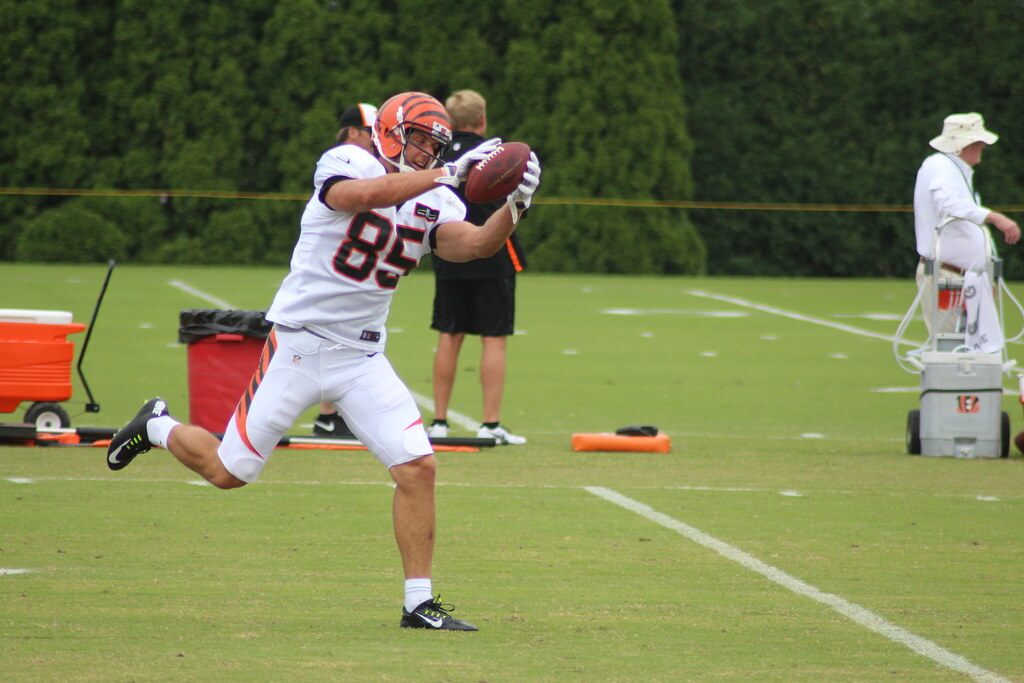 Who should bring in Tyler Eifert?

One area that a lot of teams need some help in this off season is at tight end. With the cap space issues that most teams are facing you its important to find some cheap options. Currently there is a ex pro bowler who is a reliable pair of hands and is cheap to pick up. His name is Tyler Eifert and he is available at around $3m a year. The Jaguars decided not to pick up his 2021 option and so here are a few teams that would be a good fit for Tyler Eifert.

The New England Patriots are famous for bringing in players on a cheap deal. With Eifert currently being valued at around $3m a year, he would make an ideal candidate for them. The tight end has been a problem for New England since Rob Gronkowski left. When you look at their depth chart they don’t have anything special at the tight end position.

Devin Asiasi and Dalton Keene are their main guys and both didn’t feature much in their rookie years. Asiasi only had seven targets and Keene had five. They may get Matt Lacoste back after his opt out for this season but he was never amazing and hasn’t played for a year. Eifert might not be an amazing tight end but he is a better option than all of these guys.

The Patriots currently have $68m worth of cap space so $3m would be a drop in the ocean. Eifert showed last year that he is still relevant during his time in Jacksonville. He managed to amass 349 yards from 36 receptions and also hauled in two touchdowns. Everything about Eifert makes him a Patriots target as he is reliable with safe hands and cheap.

Verdict : Everything about Tyler Eifert screams the New England Patriots. He is experienced, has safe hands and is cheap. The Patriots need a tight end and Eifert could be the guy.

The Indianapolis Colts are a team that could be in need of a tight end. Currently they have three on their roster but that is likely to change. Jack Doyle, Trey Burton and Mo Alie-Cox all had last year to make themselves a permanent feature. However, none of them did great and only Alie-Cox is likely to be around. Burton is a free agent and Doyle will not cost much to release after another disappointing year. With that in mind, it stands to reason they will want to bring in another tight end.

Another reason they will want a tight end is that new QB Carson Wentz uses tight ends well. One of his most productive partnerships in Philadelphia was with Zack Ertz. He also did well with Dallas Goedert and so it’s vital the Colts have more than one tight end.

Another reason for bringing in Eifert is that he is not expensive but the Colts have the money available to them. They currently have just over $50m worth of cap space and so signing Eifert would not be a problem. Also, given his cheap rate, it means they can still improve in other areas as well. Although Eifert is 31 at the start of next season he still has a few years left and the Colts are in a win-now window.

Verdict : The Colts are a team who like to use their tight ends and they need to bring one in. They have plenty of money available and they can offer the chance of making it to the playoffs and beyond.

The Washington Football Team showed last year that they can make a tight end relevant. Logan Thomas amassed 670 yards and six touchdowns to finish as the number seven tight end for the season. The main reason that Washington is a big candidate for Tyler Eifert is that Thomas is the only tight end on the team. Jeremy Sprinkle has shown bits but he hasn’t been great and he is now a free agent. It would be surprising if they bought him back.

Washington is another team where the money isn’t an issue for them this year. They currently have around $42m of cap space and they will be looking to beef up their offense this off-season. The defense is already looking very strong but if they want to retain the NFC East then they need to spend. Eifert is not going to make a massive difference to the team but he is a quality depth piece at a cheap price.

Verdict : Washington are another team who have got a chance of winning their division and making the playoffs. They have the money and need the depth at tight end.

The Arizona Cardinals are a team that was close to making the playoffs last year finishing with an 8-8 record. One of the reasons they didn’t make it to the playoffs is a lack of depth in the team. One area they are very short is at a tight end and so Tyler Eifert would become a decent acquisition.

Currently, the Cardinals have tight ends on the roster but only Dan Arnold has shown anything. Arnold was decent last year receiving 438 yards and four touchdowns but he is now a free agent. The rest of the tight ends in Arizona have done very little. Even if Arnold was to come back Eifert would still be a good choice to provide some quality backup.

The Cardinals have got enough money to make the move as they have $17m worth of cap space. Eifert will only cost around $3m a year and will be an experienced head to have on the team. The only reason that this move might not happen is if they feel they need to spend the money elsewhere. However, you have to feel that Eifert would be up for this move as they could become playoff contenders.

Verdict : Arizona could make it to the playoffs which would be attractive to Eifert. They are a bit tight on money but they can make it happen. Also, with Dan Arnold as a free agent they need to bring in a tight end quickly.