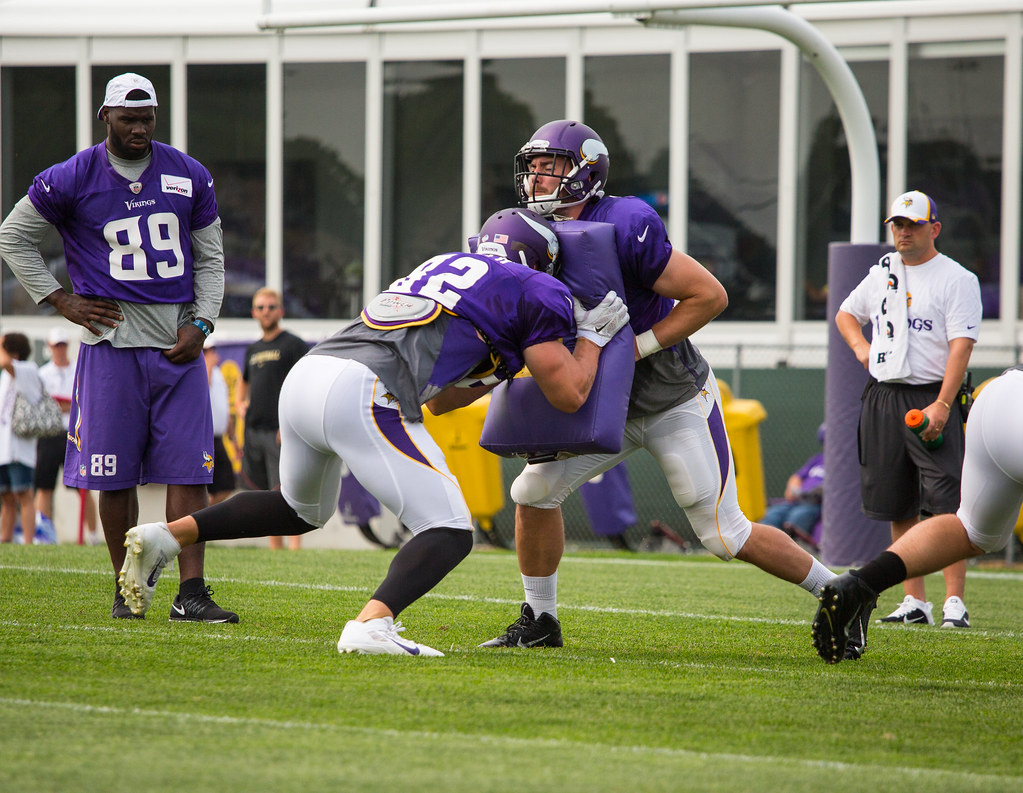 "Kyle Rudolph" by Matthew Deery is licensed under CC BY 2.0

Who Will The Vikings Target at TE?

Rudolph finished his Vikings journey with 453 receptions, 4488 yards, and 48 touchdowns. Even though Rudolph never posted elite numbers at the TE position — never exceeded 1,000 receiving yards or 10 touchdowns in a single season, Rudolph was still a true pillar of consistency. The Vikings TE didn’t miss a single contest from 2015-2019.

Now that the farewells with the Vikings blue-chip player are in the rearview mirror, how will the Vikings look to replace Rudolph? On the TE depth chart, Irv Smith Jr. is slotted up to the starting role. Smith is a second-round pick from the 2019 draft and he stood out with five touchdowns in 2020.

Smith should have an increased role next year, BUT it would make a lot of sense to bring in quality competition. The Vikings have a talented roster and they want to look to get back to the playoffs in a very competitive NFC North. This means the Vikings need to make sure they have a bright outlook at the pivotal TE position.

Which notable player could be a new Vikings TE in 2021 and join an ascending position group? I’m going to untwine the potential profiles that could be connecting with Captain Kirk.

Dan Arnold proved his worth in a contract year for the Arizona Cardinals. The third-year TE had a career performance with 31-438-4 for Kyler Murray. The Saints took a chance on the UDFA in 2018 and he’s now made a name for himself three years into the league.

Arnold will likely aim for a two-three-year deal where he can get a long-term extension after one-two years. He impressed, but he won’t garner the bank this offseason that he may prove with his current projectory.

The Vikings should opt to sign Arnold to pair with the young Smith jr. If Smith proves himself, then they won’t be too tied up with a well-paid TE. But, if Arnold shows out, then they have found themselves a franchise TE.

Arnold is the vertical threat that the Vikings will look for, as well. The former Cardinal can help Cousins on play action and his deep ball game, which have been lacking (to say the least). Arnold is simply a great cap fit, scheme fit, and potential for the Vikings TE group.

The former Gronk look alike has slowly faded into a lesser quality tight end. Tyler Eifert had a modest 36-349-2 stat line in 2020, but there have been stronger positives in Eifert’s profile as of late.

The number one concern with the Bengals TE that once recorded 13 touchdowns in a single season was undoubtedly his health. Eifert missed 34 games from 2016-2018. Thankfully, Eifert has seemed to turn the corner with his health — missing only one game in the last two years.

The 30 year old TE hasn’t been quite binary with full health and rejuvenated production, but teams will feel more confident with Eifert as a role player if they know what they’re getting out of him. Eifert could be a good veteran for the Vikings TE group and an improved red zone factor for Cousins.

The San Francisco 49ers TE has struggled to stay healthy on the field, but the TE/slot WR showed why Kyle Shanahan brought him onboard in 2020. In Week 2, Reed flexed his muscles with a pair of touchdowns.

Reed will likely have to take a prove it deal in 2021, so it would be a very smart move by Zimmer to take the most talented TE on such a deal with his TE needy team. Reed could be a lethal player with great matchups as Justin Jefferson and Adam Thielen get their matchups.

There seems to be a strong narrative that Reed is “on IR” a lot, or he’s made out of glass. That’s simply not completelty true. Reed has only missed the majority of the season in one season of his whole career, plus he’s played in 10+ games for five out of seven seasons.

Reed could be a great player to sign if the Vikings miss out on a bigger target and he’s still a free agent option during the latter parts of the offseason for the second year in a row.