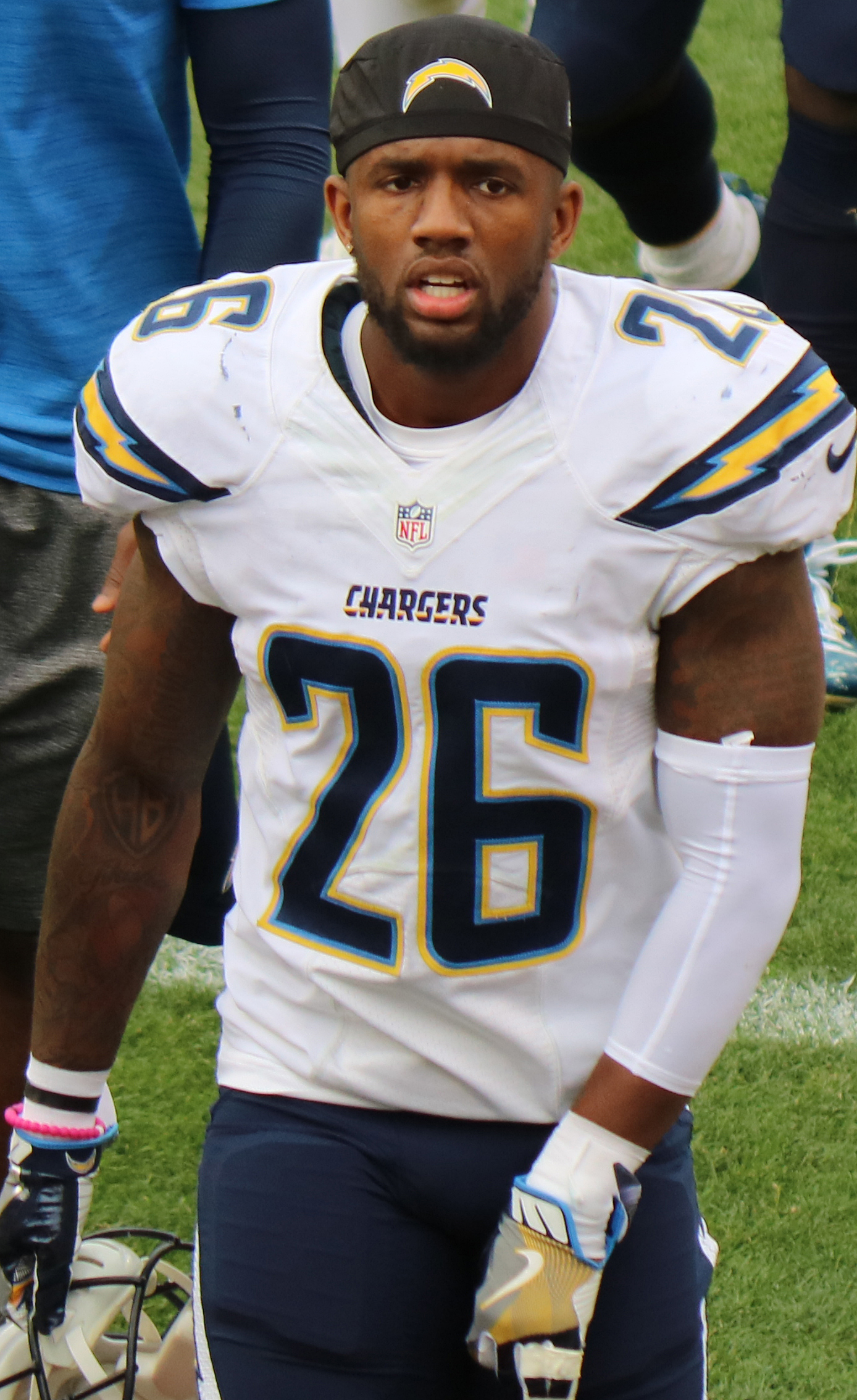 "File:Casey Hayward 2016.JPG" by Jeffrey Beall is licensed under CC BY 4.0

Where Could the Pro Bowl CB Land?

In Los Angeles, Casey Hayward has seen better days. In 2016 he led the league with 7 interceptions, with an additional 58 solo tackles. In 2017 he had 40 tackles and successfully deflected 22 passing attempts.

He made the Pro Bowl twice as a result of his efforts and has played tough in most of his eight seasons with the NFL. However, in the past two years, his numbers have dwindled and at the end of 2020, he suffered a groin injury that required him to go on injured reserve. Plus he is in the final year of his contract.

So let’s assume the L.A. Chargers will restructure his contract to play elsewhere because in the NFL – business is business. Releasing him would save about $9.75 million in cap space.

As the Los Angeles Chargers seek to make cap room, here are three potential landing spots for this 32-year-old veteran cornerback. There are plenty of teams low on the power rankings that could use a veteran cornerback (e.g. NY Jets, Jacksonville, Cincinnati), but we will focus on the promising tiers. The teams that could prove the most pivotal, for an athlete that is still capable to play the game well & a team that has playoff potential in 2021.

There is a new coaching staff and new front office in Atlanta, which means that a primary focus will be on the Atlanta defense that has this terrible knack of blowing leads in the second half of games.

Rookie cornerback A.J. Terrell, first-round pick out of Clemson could use some help. A.J. Terrell’s play in his first year was about average as he was beaten for a passer rating of 109.2.

Assuming he plays the same or improves, he will need help on the other side. None of the cornerbacks on the Atlanta roster had a PFF (Pro Football Focus) score higher than 65.0. A more senior veteran of the game could provide much-needed balance to this secondary.

Keep in mind that Atlanta is near the bottom of the NFL in salary cap space. They just made some recent cuts to their roster, so they are approximately $26 million over the projected salary cap for 2021. The new front office will be making a lot of moves in the coming months, so Casey Hayward could be a free agent worth targeting.

There is a major help-wanted sign at cornerback for the San Francisco 49ers. Long time great cornerback, Richard Sherman & 2020 standout Jason Verrett, along with the rest of the cornerbacks – K’Waun Williams, Dontae Johnson, Ahkello Witherspoon, and Jamar Taylor – are all unrestricted free agents. Most likely, the veteran Richard Sherman will move along & hopefully San Francisco can resign Jason Verrett, which leaves major question marks in the secondary.

Ideally, a veteran presence would help and here is where Casey Hayward could come in as a contributor. Moreover, if Verrett is resigned, he could be paired with Casey Hayward – again. Verrett played cornerback with the Chargers from 2014 through 2017. A familiar cornerback connection could boost the San Francisco secondary.

If Verrett is not resigned, then the “help wanted” sign still remains in the San Francisco secondary & Hayward could fill a much needed defensive spot in San Francisco.

If Russell Stays, the Hawks are in Play

Defensively speaking, the Seattle Seahawks ranked at, or damn near the bottom against the pass. Here’s a defining stat: The Seahawks defense allowed the most passing yards in NFL history over their first nine games of the season & allowed 30 points per game.

At the end of the season, the defense allowed a whopping 371 points … yet they still went to the playoffs. The defense was able to turn things around in the second half of the season, which enabled them to clinch the NFC West with a 12-4 record.

In this offseason, their primary goal should be to protect Russell Wilson. Investing in an offensive line that can keep him competitive can change the man’s mind about leaving. Step two is to simultaneously improve the secondary & the pass rush.

The secondary has promise, but it desperately needs a cornerback. They have potential with cornerback Shaquill Griffin, who had 63 tackles, 12 pass breakups and three interceptions over 12 games during the 2020 season. But Griffin missed four games with a hamstring injury and is a free agent. Here Casey Hayward could revitalize his career with a hungry secondary with something to prove. If Griffin is resigned, it could be formidable with Casey Howard playing the other side.

Over the top, strong safety, Jamal Adams is a two time pro bowler and potential hall of fame candidate is still under contract for one more year, but he is facing multiple off season surgeries. The addition of Casey Hayward could be a vital improvement to a much beleaguered secondary that still has something to prove.

The trajectory of Casey Hayward in the NFL is nearly endless for now. If the above options don’t work out for Casey Hayward, there’s always Jacksonville which has plenty of cap room and a deep need for cornerback. Hopefully he can return to his old form and improve a much needed defense with his experience and ambition.