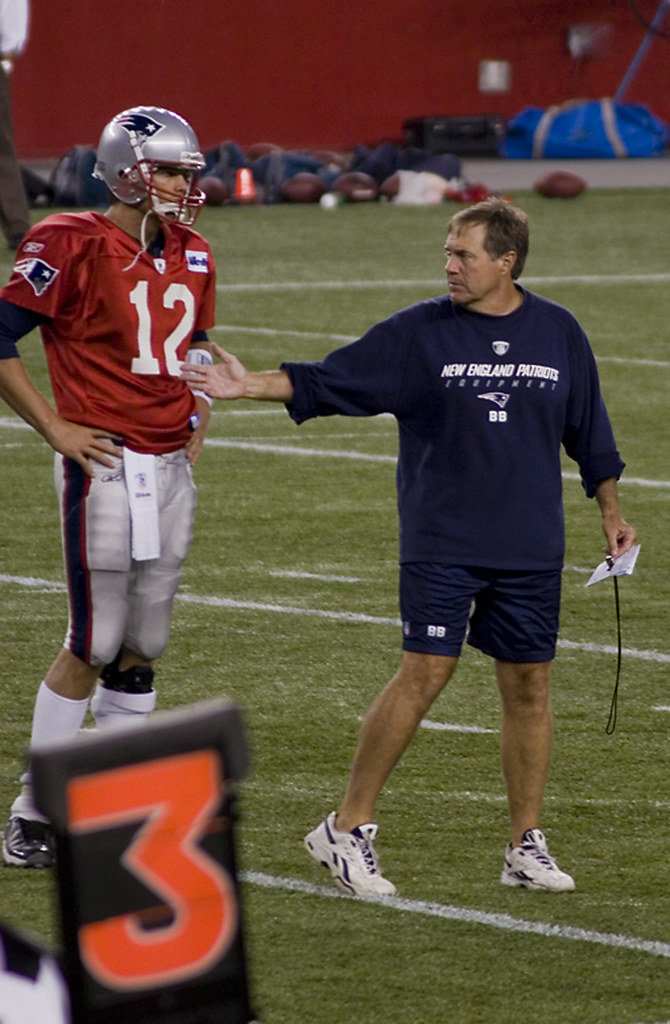 "Brady's back!" by Andrew Choy is licensed under CC BY 2.0

The ‘New’ New England Patriots are in a fascinating transition coming into their second offseason in the post Hall of Fame QB Tom Brady era. Brady is fresh off his seventh Superbowl victory and riding high with the Tampa Bay Buccaneers, while the Patriots and Head Coach Bill Belichick are coming off their first season below .500 since Drew Bledsoe led the team back in 2000.

2020 was a disaster for this storied franchise who ended the season with a 7-9 record, finishing third in the AFC East, and were forced to watch their division rival Buffalo Bills go onto the AFC Championship. For a team and a city used to winning and winning big, this season had many wondering if those old ways could ever return.

New England currently has the third-most cap space in the NFL with a projected 72M available and is expecting the return of several key players who opted out of the 2020 season. (Dont’a Hightower, Patrick Chung, and Marcus Cannon in particular) With familiarity returning to the lineup and the cap space to bring in top-tier talent, the Pats should find themselves right back in the thick of things in 2021.

Here are five key acquisitions I believe will immediately impact the New England Patriots and propel them back into the playoffs.

Bringing back Cam is a decision that will be met with very mixed reviews and that is understandable after the up and down passing performances he put on display this year.

Cam struggled throughout the season to find a rhythm and consistency with his receivers and boy was that evident on Sundays. New England’s passing offense ranked third worst in the National Football League with 180.6 YDS/G and tied for dead last in the NFL in passing touchdowns with 12.

On the flip side, the Pats rushing attack was among the best in the league finishing the season fourth in yards with 146.6 YDS/G and ninth in rushing TDs with 20. Their Quarterback Cam Newton accounted for his fair share, ranking first in QB rushing TDs with 12 and third in rush yards by the position with 592 proving he can still get it done with his legs.

With a full offseason under his belt and an offense built around his strengths, there’s good reason to believe Cam can and will lead this team back to the playoffs.

The Patriots are in desperate need of playmakers on offense and this need goes beyond the 2020 season. Even in Tom’s final season captaining the ship in Massachusetts, there was a glaring need for receiving help and that need only grew with his departure. I say all that to say this, it is time to break out the cheque book and pay for who I consider the best free agent WR on the market, Allen Robinson.

Robinson is coming off his third, 1000+ receiving yard season in his career (102 REC 1,250 YDS 6 TDs) and has done so without any consistent help from the Quarterback position. The 27-year-old is in the twilight of his career and has proven to be QB proof, posting top-tier stats with several lower-tier Quarterbacks.

If the Patriots and in particular the offense want to get back to relevance, they will need a true number one WR like Allen Robinson to keep defenses on their toes.

If there is one position the New England Patriots know how to use and get uber production from, it is the TE position, which has been held for the past decade by future Hall of Famer, Rob Gronkowski. In his absence, the Pats must prioritize a suitable replacement and the name at the top of that list should be Hunter Henry.

While replacing a Hall of Famer is nearly impossible, Henry does bring a lot of positive upside to the table. At 6’5, 250 Ibs, the 26-year-old possesses the size, speed, and receiving skill set that’s been a matchup nightmare for teams to deal with.

The knock-on Henry is his durability, in his short career he has had some trouble staying on the field which has delayed his inevitable breakout season. (This year he played in 14 games notching 60 REC 613 YDS and 4TDs) If the Patriots want to make use of that presumably massive section in their playbook allocated to the TE position, then signing Hunter is a move they must exploit.

This just in, the Patriots front seven needs improvement, in particular the defensive line. One name that I believe can fit in with the ‘Patriot Way’ is 26-year-old Defensive End Trey Hendrickson, who broke onto the scene in 2020 in a big way notching 13.5 sacks for the New Orleans Saints finishing tied for second in the league with All-Pro defensive tackle Aaron Donald.

After a season like Trey’s, it is likely the Saints will not be able to resign him, leaving the pass rusher with a large payday looming and a new team in the waiting. New England has an immediate need to get younger and better on the defensive line and I believe Trey fits that profile perfectly.

Hendrickson spent the past few seasons on a well-coached, dominant Saints defense with Superbowl aspirations. Learning directly from the likes of Cameron Jordan has benefited Trey greatly and if the Patriots want to return to dominance on that side of the ball, adding a player like Trey is the right move.

With news of five-time pro bowl defensive interior lineman Jurrell Casey’s release from the Denver Broncos, It should be only a matter of time until coach Belichick makes a move to acquire a player of his caliber.

It is no secret that coach Belichick is considered by many as a defensive guru that builds his teams from that side of the ball. A lack of a pass rush and inconsistency in stopping the run plagued the Patriots defense all season and to get back to being an elite unit, this must be addressed.

Adding a player like Jurrell Casey can immediately resolve a lot of the Patriots’ defensive line woes. Casey is coming off a season cut short by a torn bicep he suffered in week three, however, he is expected to make a full recovery for next season.

The Pats under this regime have had a history of great interior defensive lineman and I can see history repeating itself with the addition of Casey in 2021.