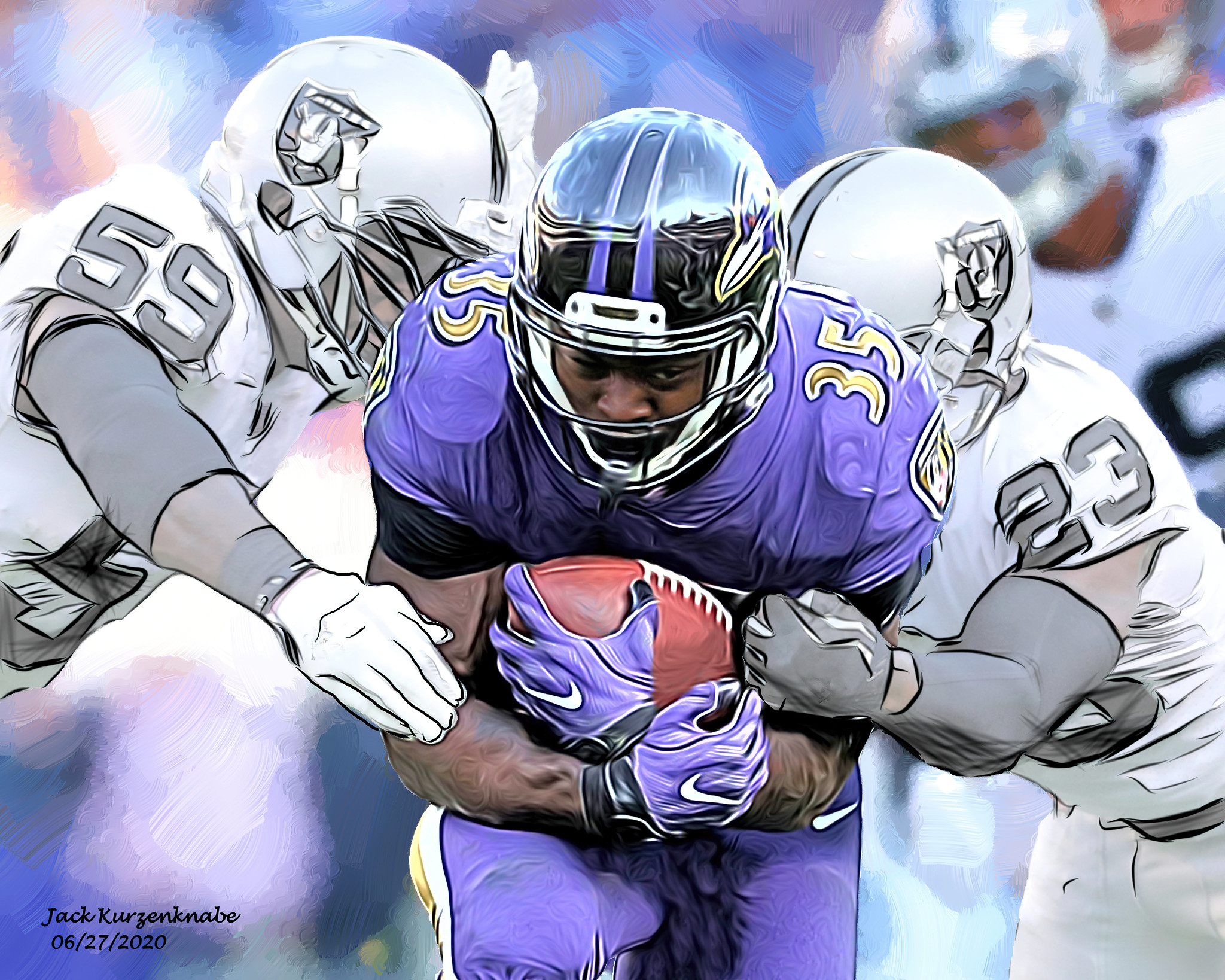 Should the Ravens Resign Edwards?

Gus Edwards has been a good backup running back during his three years with the Ravens, quietly putting up respectable numbers and making a solid start in the league. Edwards ran for over 700 yards in all three years, with a career average of 5.2 yards per carry. At 238 pounds, he isn’t the fastest guy, but he is extremely difficult to bring down, and his physical running style slowly wears down defenses.

Edwards is still only 25 years old, so he should attract interest from RB-needy teams this offseason. He probably isn’t good enough to be a bell cow in an offense, making him an affordable option, but he has been effective in timeshares and complementary roles throughout his career so far. Here are five teams who might pursue the fourth-year-pro.

Ravens head coach John Harbaugh loves to use Edwards as a secondary back, so re-signing him at a cheap price could be a smart move. Harbaugh doesn’t tend to have one workhorse RB, so Edwards would probably continue to see north of 75/100 carries behind starter J.K. Dobbins. That estimate assumes that Dobbins takes over more of the workload in his second season, but it wouldn’t be shocking to see Edwards get over 130 attempts for the fourth straight year.

The Ravens don’t have a glaring hole at RB by any means, but after Dobbins, they don’t have much depth. Edwards has functioned well as a depth piece in the past, and he wouldn’t cost much salary-wise. Re-signing Edwards would make sense for both the team and the player, as Edwards would get a good role in the offense, and the Ravens would retain a key player on a team-friendly contract.

With starting RB Kenyan Drake heading into free agency, the Cardinals have a void at running back that needs to be filled. Cardinals HC Kliff Kingsbury recently expressed confidence in Chase Edmonds, who served as a pass-catching back in 2020. However, Edmonds has never been anything more than a change-of-pace guy, and while he is an excellent pass-catcher, his rushing ability may not be good enough for a three-down role.

Edmonds may not be bell-cow material, but he’d likely be effective in a timeshare. If the Cardinals choose not to re-sign Drake, Edmonds and Edwards could be a cheap, but solid, one-two punch. Both players would probably suffer in a workhorse role, but in a timeshare, they have each proven that they can be efficient and effective. If the Cardinals pursue Edwards for a cheap deal, it would free them up to focus on other positions, so Edwards is certainly an attractive option in that regard. If Edwards continued his solid play from years 1-3, it would make a potential deal even better.

The Jaguars have been rumored to want another running back to supplement starting RB James Robinson, and adding another guy could be smart, as it would lessen the wear and tear placed on him. As mentioned already, Edwards is good for a supplementary role, and he would benefit from having Robinson to take pressure off of him.

The Jaguars couldn’t get anything going in the passing game in 2020, but their running game was reliable, and the offense will benefit from their expected selection of Clemson QB Trevor Lawrence as the #1 overall pick in the draft. If the Jaguars become a threat through the air, some pressure would be lifted from the running game, which would benefit both Robinson and Edwards. And, Edwards has proven that he can handle a workload north of 100 carries; if he could do that in Jacksonville, that would be huge for extending Robinson’s career.

The Dolphins have lots of cap space (nearly $37 million), so naturally, they have been rumored to be interested in Aaron Jones, the top RB on the market. However, Jones could end up making close to $15 million per year, and while the Dolphins could afford that type of contract, it might not be a wise move to offer one. Great running backs certainly can help teams, but recent history shows that huge RB contracts don’t tend to translate into wins.

The Dolphins probably will be tempted by Jones, but it could be smarter to look elsewhere for a running back given his cost. Miami already has a solid RB in Myles Gaskin, so all they really need is a change-of-pace guy who can handle some of the workload. That description fits Edwards perfectly, and he could settle in nicely to a 100-140 carry role in Miami.

Running back is definitely not the biggest need for the Bengals, as other areas need major work (offensive line and pass rush, for example). However, it wouldn’t require much spending to acquire Edwards, and such a move could pay off in the long run. 2020 proved that Bengals backup RB Giovani Bernard lacks the rushing ability to fill in for Joe Mixon as a three-down guy. However, Bernard is a decent pass-catcher, and he can handle third-down work. If the Bengals could get a backup who could run between the tackles, they’d have more insurance for Mixon, who has battled numerous injuries throughout his career.

As mentioned earlier, Edwards is a very physical runner, and his tough running style could complement Bernard’s pass-catching ability nicely. Both backs could take some of the workload even with Mixon healthy, as Mixon has shouldered a lot of carries during his first few years in the league, and a lessened workload could extend his career. Edwards’ role with Cincinnati wouldn’t be as big as it would be for the other teams mentioned. However, head coach Zac Taylor might like him as an inexpensive option who could help establish Cincinnati’s RB depth while taking a few carries per game.