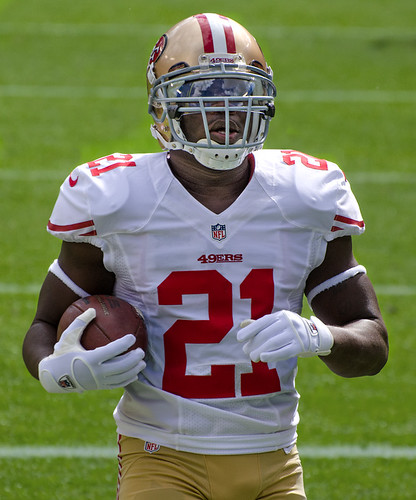 "Frank Gore" by Mike Morbeck is licensed under CC BY-SA 2.0

Where Will The Future HOF Land?

As an NFL fan, free agency is one of the most exciting times of the year. Hopeless, die-hard fans sitting on pins and needles, pleading for players like Deshaun Watson to join their uninspired franchise and lead them to the promised land. There’s a certain vibe surrounding free agency that just tickles my fancy. And with the 2021 NFL free agency frenzy about to begin, I know the question that every football fan has been asking themselves since the Super Bowl confetti flew; where in the hell is Frank Gore going to play next season?

Before I jump into things, I know what you’re thinking; there is absolutely no way that the soon-to-be 38 year old Gore will want to come back for his 17th NFL season. That, my friends, is where I think you’re wrong.

Gore is a freak of nature. I mean, obviously; he’s a professional football player (duh), but the man has single handedly changed the average age of running backs. About to enter his 17th season in the NFL, Gore sits atop the games running back leader boards, ranking:

The crafty veteran didn’t just reach these marks by sheer volume alone. Gore was an absolute beast in his prime. The five-time Pro Bowler was the first player in NFL history to record 12 consecutive 1,200-yards seasons from scrimmage, and is still producing in his later years.

The fact that Gore’s possible return is even a conversation is a testament to the man’s work ethic and instinctive football knowledge over the past 17 years. And the fact that he overcame two ACL injuries in college is just the cherry on top.

Now, I’m not saying Gore is going to step into a franchise and be the missing piece to an offense, because he’s not. Let’s face the facts; Gore is an all-time great, but there’s no room for a sympathy player on the 53-man roster. An aging running back is going to have a tough time finding a job after rushing for 653 yards and two touchdowns (Gore’s 2020 statline), no matter who he is. However, there are many young running back rooms out there who could severely benefit from Gore’s presence alone.

Here are three teams that should look to add Gore to their running back room in 2021.

In his 10 seasons in San Francisco, Gore amassed 13,956 scrimmage yards and 75 total touchdowns; and when he decides to hang up the cleats, his number 21 will surely be retired in the city forever. If 2021 were to be Gore’s last season, it would make sense for it to end exactly where his career started.

“I would love to wear that No. 21 jersey one more time,” Gore told ESPN, via 95.7 The Game. While Gore admits his desire to return to San Francisco, he does not have much, if any, leverage in the situation.

The 49ers currently have $25 million in cap space. With big name free agent Trent Williams to re-sign, as well as running backs Raheem Mostert and Jeff Wilson still under contract, Gore may not be on top of the Niners priority list.

One of the most efficient short-yardage backs of all time, Gore could come in very handy on the goal line for San Francisco, who only rushed the ball 14 times from within five yards of the goal line in 2020.

A reunion between Gore and the 49ers certainly sounds intriguing. The sure-fire Hall of Famer going back to where his career started? Now that’s a story that just needs to be written.

Let’s face it; Gore is not going to want to sign with a rebuilding franchise. He did so with the Jets in 2020, and that was an all-around disaster. But seriously, why would Gore waste a precious year of his storied career to be on a sinking franchise? That is where the Kansas City Chiefs come in.

With quarterback Patrick Mahomes at the helm, the Chiefs are sure to be Super Bowl favorites for the next decade. The good news for Gore is that the Chiefs running back room is one of the youngest in the league.

Led by Clyde Edwards-Helaire (Age: 21), Gore can step in and provide a much-needed veteran presence to an already championship winning team.

Edwards-Helaire was fairly atrocious from inside the five yard line during his rookie season, posting:

While the Chiefs tend to run misdirection plays on the goal line, I’d say that’s more-so due to lack of trust in the running back position.

The Chiefs don’t have a lot, if any, money to play around with. However, I’m going to chalk this landing spot up to the old saying: “cap space doesn’t even really exist.”

The Chiefs can restructure some contracts, cut dead cap, and make a small amount of room to fill out their running back room with the Hall of Famer, Gore.

Two years ago, when Gore played on the Buffalo Bills, Tom Brady was still the quarterback of the New England Patriots. Fast forward to present day, and the Bills are revitalized, coming off their first AFC East title in 15 years, and poised to march to the Super Bowl.

With Gore’s playing career coming to an end in the near future, it could be beneficial for him to go to a team in which he knows the system. The fact that current Bills running backs Devin Singletary and Zack Moss can’t convert at the goal line makes this the cherry on top for Gore.

While I understand that Moss was essentially drafted in 2020 to replace the aging Gore, the landing spot makes a lot of sense.

I get that Gore isn’t a pretty addition, or one that fans will be clamoring for; but it’s a smart move for a contending team that simply needs to fill in the cracks in their pursuit of a Super Bowl.