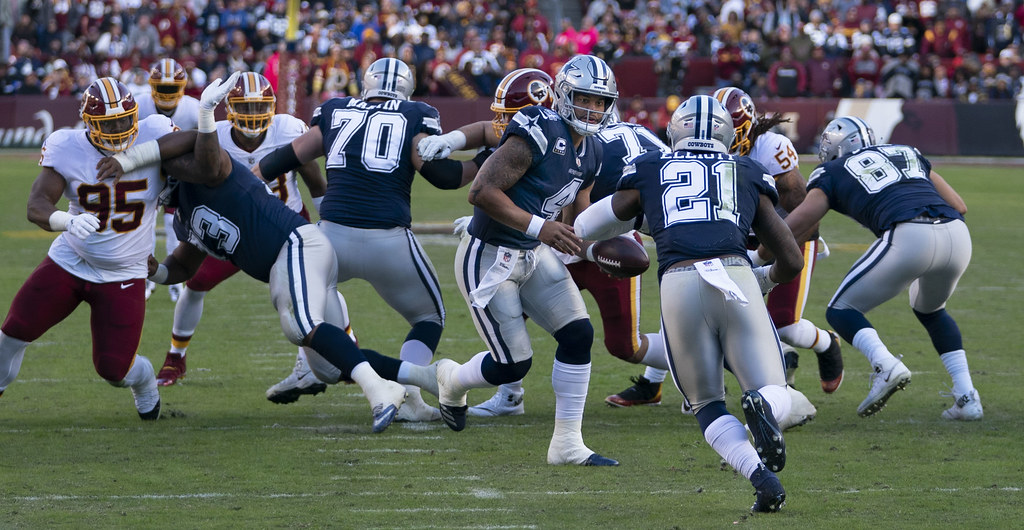 The Dallas Cowboys had a disappointing 2020 season despite much pre-season hype. Mike McCarthy had a difficult first season as Cowboys head coaching, only guiding them to a 6-10 finish despite a week NFC East. As a result, the Cowboys currently occupy the 10th and 44th overall picks amongst others. How should Dallas use these picks?

Here are five players Dallas should target in the NFL Draft.

Penei Sewell (Offensive Lineman)
This is a left-field one due to the offensive lineman likely to have been taken by the time the tenth pick comes.
However, there is a chance. The two teams that really could come in for Sewell and these are the Miami Dolphins and Cincinnati Bengals. The other teams before Dallas in the draft have bigger positions of need. The Dolphins and Bengals have both been tipped to draft Sewell but could also draft either one of wide receivers DeVonta Smith or Ja’Marr Chase. This would leave Sewell with a great chance of being taken by Dallas. The injuries to offensive lineman led to poor protection and we all saw the season-ending injury to Dak Prescott. Dallas needs bigger strength in depth at the position to allow for injuries to prevent star players from spending time out.

Micah Parsons (Linebacker)
The defense is the area that the Cowboys need to focus on the most. Should Sewell be taken by the teams before Dallas make their pick, then Parsons should be the man they take. In 2020, Dallas was 31st in rushing yards allowed, 11th in passing yards allowed, 23rd in total yards allowed, and 28th in points allowed. Parsons is arguably the best defensive player in the draft but could fall to 10 should the teams before Dallas go for bigger positions of need. Due to opting out of the 2020 season, Parson only played two seasons in college with Penn State. He recorded 191 total tackles and 6.5 sacks during the 26 college games he played in. Fears over a lack of college game time could lead to Parsons falling to tenth, which is when Dallas should capitalize.

Gregory Rousseau (Defensive End)
Rousseau is the next best option for Dallas. Provided either Parsons not be available or the Cowboys not like what they see, the Miami Hurricanes defensive lineman should be someone of interest for Jerry Jones and Mike McCarthy. He offers something different to fellow defensive end Parsons. Rousseau also sat out the 2020 season, with just 14 college games to his name. In his one full season, he managed to record 54 total tackles and 15.5 sacks. Either Rousseau or Parsons would be a great way to compliment another defensive end, Demarcus Lawrence.

Jaelan Phillips (Defensive End)
Teammate Phillips transferred to Miami during his final year, managing to record 8.5 sacks. He can get the quarterback and is particularly impressive in stopping the run. Rousseau is seen as the bigger prospect but Phillips can be a great alternative should his teammate get taken before the Cowboys are on the board. The Cowboys would most likely need to trade up via their second-round pick.

Azeez Ojulari (Linebacker)
Coming in at 6”3 and 240 lbs, Georgia linebacker Ojulari appears a brilliant prospect. PFF has graded him as the best pass rusher in the draft. His college tape shows plenty of big hits as well as the ability to come in from the edge, doing so at speed. His ability to sack the quarterback was there to see in 2020, with 12.5 recorded along with 5 forced fumbles.Dallas would also need to trade up to get him as he is unlikely to be there at pick number 44.

3 Free Agency Signings That Happened But Should Not Have Happened
Grading the Bengals Free Agent Signings
wpDiscuz
0
0
Would love your thoughts, please comment.x
()
x
| Reply