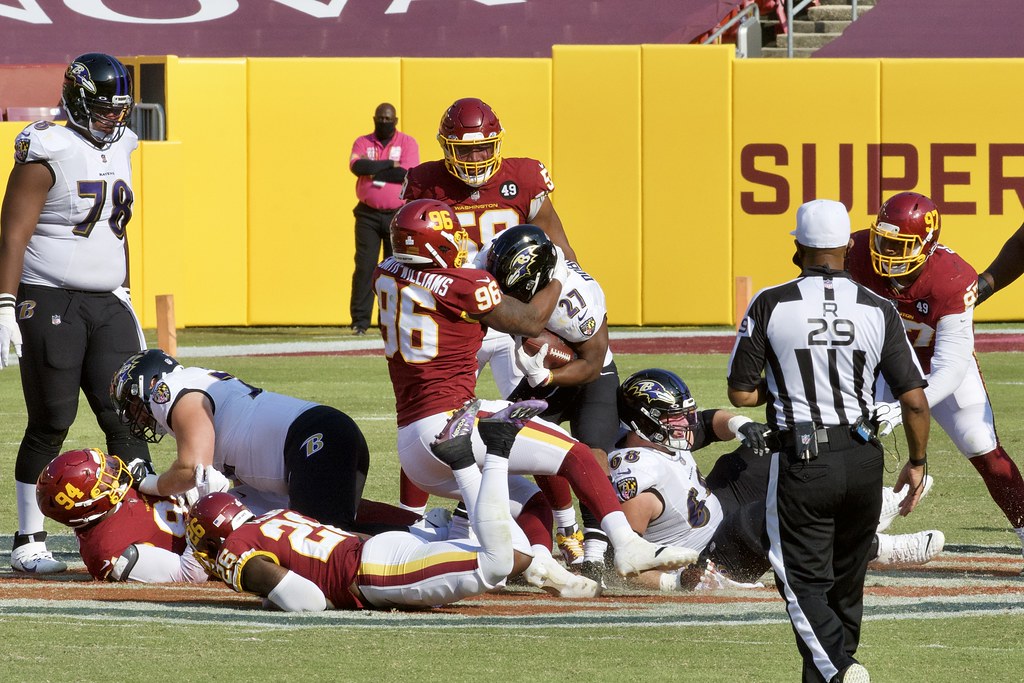 Here are MY three second-year players to buy in fantasy football. Whether you’re a dynasty fantasy football player or a redraft player you’ve certainly heard of these guys.

The hype surrounding Dobbins draft location quickly faded in the early 2020 season as his usage was not where fans of Dobbins wanted it to be. However, if you have seen a Ravens stat line in the last 3 years you are well aware of the fact that they LOVE to run the ball. This will escalate his value much like CEH’s value was astronomically high going into the 2020 season largely because of his landing spot. The difference between CEH and Dobbins is that Dobbins is not exclusively relying on his landing spot to make him a legitimate fantasy star. Dobbins’s talent is as real as it gets. He ended the season as the Ravens’ number 1 running back and all while compiling the NFL’s most yards per carry at just over 6 yards along with the Ravens’ rookie record with nine rushing touchdowns. He finished with 805 rushing yards and finished with a franchise-record seven consecutive games with a rushing touchdown. As you can see he finished the season very strong and hopefully those lines can be a sign of things to come for him out of the gates in the 2021 season. The Ravens offensive line was the dictionary definition of “mediocre” as they ranked 16th in the NFL. If the Ravens are to add some strong pieces to this line it would bolster this heavy rush offense significantly. Don’t forget that this same O-Line was a large reason for the Ravens’ early exit in the postseason. All this to say BUY DOBBINS. This could be the cheapest he will be for a couple of seasons. He is one of the many obvious buys for the coming season. Fun fact. J.K. Dobbins was chosen with the 55th pick of the draft which was involved in a trade FROM Atlanta, but the pick originated from New England when they gave this pick to Atlanta for M. Sanu.

Let’s get right to the fun facts. Yes, he is related to Samaje Perine. Yes, he is also a cousin to Myles Jack. Now that that is out of the way let’s get back to it. This NYJ backfield is …. how shall we say it? WIDE OPEN and Perine has everything to prove and nothing to lose. The Jets are sitting at the #2 pick in the NFL draft and many are anticipating they take a QB at this spot. However, it does not matter if it is Sam Darnold or Justin Fields (who worked a bit with Trey Sermon who shares similar attributes to La’Mical Perine) the Jets still need to legitimize their running game ASAP. He was selected with the 120th pick of the draft so they aren’t inclined to “dedicate” too much time to him as their feature back. But if you’re looking to air it out for Mims and Davis on the outside we all know the run game is a giant step in that direction to be able to begin thinking of getting it downfield. The Jets still have money to spend and that could be spent on James Conner or other veteran’s RBs BUT if this does not happen you can afford to grab yourself some Perine. Send a 2nd round rookie picks for him or draft him somewhere after the 15th round because that’s where he seems to be going. He averaged 5 yards a carry in college and had 40 receptions over 13 games. He is a big back and a big brut. His upside is there but be warned he could downward spiral to a backup if the Jets decided to spend that money on a free agent running back.

This is a big boy. 6ft 4in and 240lbs it is clear by those numbers alone that he is a beast to cover. Throw in his reach for the catchability and you’re in trouble. He crashed into the fantasy scene with a total of 11 touchdowns. 9 receiving and 2 rushings. He is a force downfield and as previously mentioned he can reach out and get it. He was targeted 109 times and hauled in 62 receptions. If you ask me there is nothing but upside for this guy. Everything I see and read is all about Dionte Johnson and JuJu SS coming back but Claypool seems to be the forgotten stud here in Steel City. That is totally fine with me because I’ll take this guy 10/10 over the previously mention guys. What may be Big Ben’s last season for the Steelers one can speculate that he may be in a “win at all cost” mode. If this is the case it could be a very fun year for Claypool owners.