The Tennesee Titans have lost two major weapons in Corey Davis and Jonnu Smith. Other members of the Titans offense should thrive because of their leaving while others should drop in value. 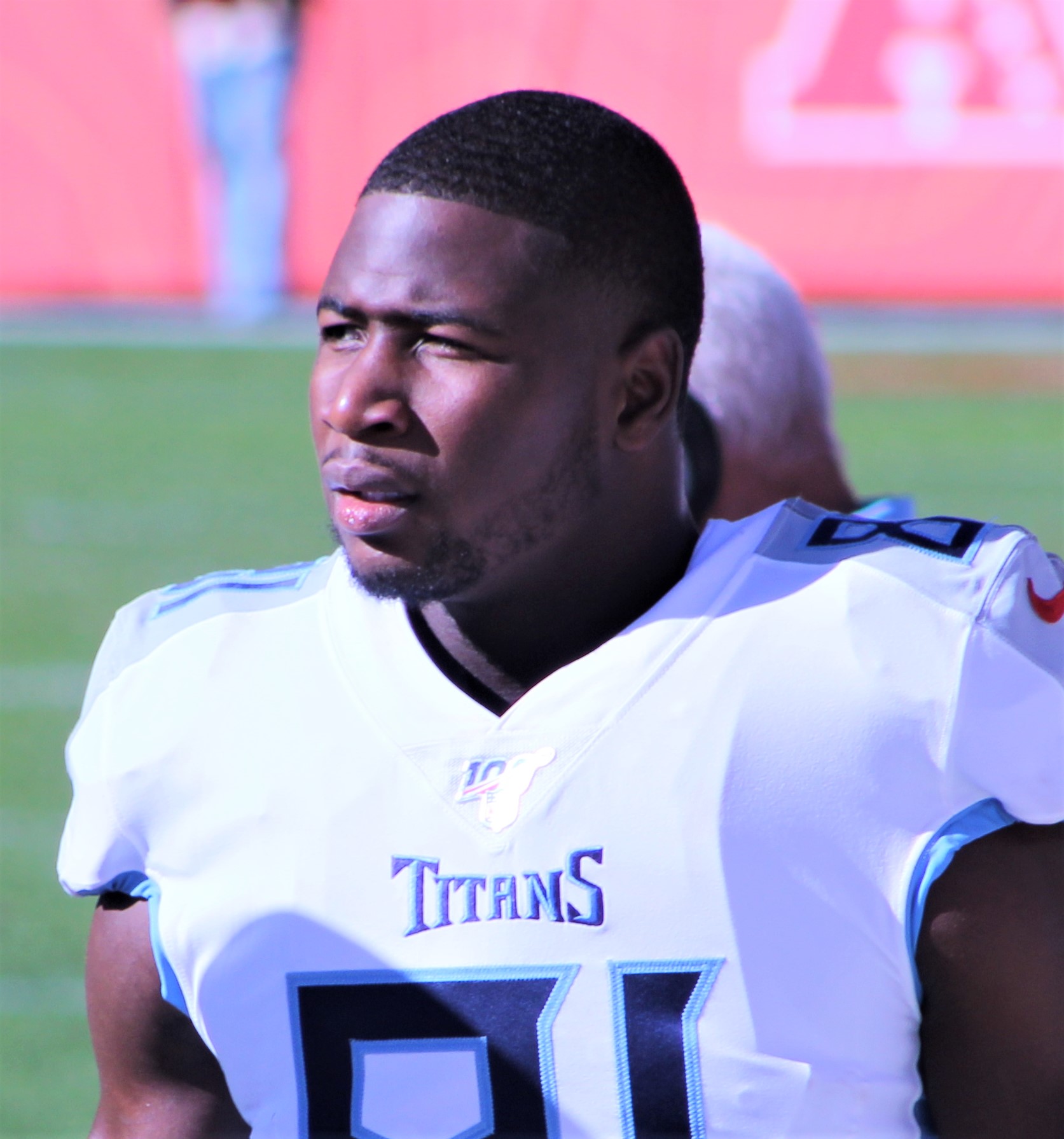 The Tennesee Titans prioritize signing defensive playmakers like Bud Dupree and Denico Autry early in free agency. However, in the process of signing those players, they lost two of their top pass catchers from a season ago.

When both Corey Davis and Jonnu Smith’s production from a season ago is accounted for the Titan’s offense has lost 106 receptions for 1,432 yards and 13 touchdowns in free agency. Removing that type of production will impact an offense the following season. It will also impact the fantasy values of the players on that offense.

Here is how the removal of Corey Davis and Jonnu Smith from the Titans offense impacts their fantasy-relevant offensive players.

Last year was Ryan Tannehill’s first full season as the Titans starting quarterback. Despite a dip in production between weeks 7 and 10 where he only averaged 15.26 points per game against some tough opponents, Tannehill finished the year as the seventh-highest scoring fantasy quarterback. He averaged 21.9 points per game last year.

Unless the Titans replace Corey Davis and Jonnu Smith with available free agent veterans or early in the draft, it is more than likely that Tannehill’s production will drop. Davis and Smith made up 37.6% of Tannehill’s completions, 43.5% of Tannehill’s passing yards, and 39.4% of his passing touchdowns in 2020-21.

That production won’t be completely lost. Other pieces in Tennessee should take on a chunk of that production. But the less talented weapons that Tannehill will have this upcoming season won’t be able to replicate the production Davis and Smith have done in this offense the past few seasons.

From a fantasy standpoint, Ryan Tannehill drops out of the weekly starting territory in standard ten team leagues. Instead, he becomes a bye-week replacement quarterback that is likely on the waiver wire for most of the season like Kirk Cousins, Derek Carr, or Matt Ryan. Tannehill should finish in-between the range of QB12-15.

Derrick Henry was one of the only first-round fantasy running backs that did not disappoint last season. Henry was taken in the middle of the first round in most standard leagues and finished the year with 331.1 PPR points which was third among running backs only behind Alvin Kamara and Dalvin Cook. Henry averaged 20.8 points per game and had four performances with over 35 PPR points per game.

Since Corey Davis and Jonnu Smith have left the Titans Henry becomes even more important to the Titan’s success because he is one of their only playmakers. New Titans offensive coordinator Todd Dowling may actually put more of an emphasis on the running game than they did under Arthur Smith. That is crazy to think about considering the Titans were second in the league in team rushing yards, rushing touchdowns, and rushing attempts. On top of that, they were also second in the league in rushing yards per carry with 5.2 yards per attempt.

The only downside to Henry having a larger role in the offense is that teams will be able to stack the box against Henry more frequently and could have more success. Due to the lack of playmakers that have surrounded Henry over the last couple of seasons defenses will put more focus on Henry and will stack the box with defenders to limit Henry’s production. Defenses will want to take their chances on leaving Titans playmakers (outside of A.J. Brown) in single coverage on early downs and short-yardage situations in order to try to keep Henry at or behind the line of scrimmage.

So overall the impact of Corey Davis and Jonnu Smith leaving Tennesee on Derrick Henry is that he should receive more carries than he has in previous years. But his yards per carry could go down because defenses now do not have to worry as much about the Titans passing attack beating them if they focus solely on Henry. This leaves Henry in a similar position as he was before Tennesee lost Davis and Smith. Henry should still be drafted in the first round in fantasy drafts and should be an RB1 in all leagues. He will still be in similar fantasy territory as Dalvin Cook, Christian McCaffrey, and Alvin Kamara next season.

In his second season, A.J. Brown continued to show the big play ability he showed during his rookie season. However in 2020-21, Brown was more consistent with his production. Fantasy owners felt more comfortable playing Brown every week knowing he would likely put up between 12-21 PPR points per game when he was healthy. Despite playing in only 14 games last year Brown scored the 12th most fantasy points among wide receivers last season. His 17.7 PPR points per game was sixth among wide receivers.

Brown has the most to benefit from former teammates Corey Davis and Jonnu Smith signing elsewhere. Now that Brown is far and away the most dangerous weapon in the Titans passing attack he could be in line for a career year. Secondaries may pay Brown more attention. But it shouldn’t affect his overall production considering the defenses already paid Brown the most attention out of the Titans pass catchers when Davis and Smith were on the team. Brown should definitely see a major increase in targets which should lead to an increase in total production.

It is insane to think about what Brown’s numbers could jump to in 2020-21. He already led the team in targets, catches, receiving yards, and receiving touchdowns. Now that the Titans second and third highest producing players in each of those categories are gone Brown should receive a large percentage of that production go his way.

If the Titans do not add any other major playmakers and Brown could stay healthy for the 2021-22 NFL season he could easily rise to WR1 conversation in fantasy in standard leagues. It would be hard to imagine Brown not exceeding his 17.7 PPR points per game from a season ago. Last year he was able to put up that type of production with only one game where he reached double-digit targets and receptions. That game was Week 17 against the Houston Texans where he had ten catches on eleven targets for 151 yards and a touchdown.

Next season A.J. Brown could reach the upside and production of other star wide receivers like DeAndre Hopkins, Stefon Diggs, and Calvin Ridley. All of which should be drafted as WR1’s next year in fantasy in all formats.

In order to soften the blow of losing Corey Davis, the Tennesee Titans signed former Los Angeles Rams receiver Josh Reynolds to a one-year $1.75 million deal. For the last couple of seasons, Reynolds has been the fourth wide receiver in Sean McVay’s offense. He was able to fill into any receiver’s role in the Rams offense whether it was being the team’s deep threat or creating plays over the middle in the slot.

His versatility has made him a great insurance policy for when Cooper Kupp was hurt in 2018, Brandin Cooks was hurt in 2019, or 2020 second-round pick Van Jefferson wasn’t ready to become one of the Ram starting receivers. During his eight starts in 2018-19, Reynolds had 29 catches for 402 yards and five touchdowns. This past season Reynolds had career highs with 52 receptions on 81 targets for 618 yards during thirteen starts.

Automatically Reynolds is considered the second receiver on the Titans depth chart. He is not only the team’s second receiver but could also be considered the team’s second option in the passing game. Reynolds has never been more than a team’s third-option offense. It is very possible that Reynolds could have the best season of his career during the 2020-21 season in Tennesee.

Due to the lack of consistent fantasy-relevant production in the past and depth at the wide receiver position, it is hard to expect much out of Reynolds in a standard ten-team league. However, in a 12 team or deeper PPR league’s Reynolds could be a sleeper due to the number of targets he will see. Reynolds shouldn’t be drafted in standard leagues but could be a player to take a flier on in deeper leagues as a sleeper. If Reynolds thrives in his new role in Tennesee he could creep his way into flex territory in deeper leagues. If that was the case Reynolds would be in the same range as wide receivers like Randall Cobb, Denzel Mims, and Allen Lazard.

The Tennessee Titans managed to retain one of their pass-catching tight ends Anthony Firkser on a one-year deal. Now that Jonnu Smith is a member of the New England Patriots, Firkser will likely be the Titans starting tight end last season. Last season when Smith missed Weeks 12 & 13 Firkser became a popular fantasy pick-up. Even though he disappointed in Week 12 against the Colts he showed promise filling in for Smith Week 13 against the Browns. He had five catches on seven targets for 51 yards. That was good for 10.1 PPR points, which many will take from their starting tight end considering the lack of depth and talent at the position.

Firkser has a great relationship with new Titans offensive coordinator Todd Downing because Downing has been the Titan’s tight end coach since 2019. Since Downing is so familiar with Firkser he may plan on making him a featured player in the Titans offense next season. Firkser’s only competition for the team’s second option in the passing game is Josh Reynolds.

Even though production from the tight end position in fantasy has been scarce over the last number of years there are still better options than Firkser who should be drafted in standard 10 team fantasy leagues. Firkser should be considered a fringe TE2 in fantasy leagues. He should be valued between TE15-25. Other tight ends within that range include Dan Arnold, Eric Ebron, and Jimmy Graham. However much like the players previously mention Firkser has the upside to finish within the top-10 if he has a breakout season.

When both Corey Davis and Jonnu Smith’s production from a season ago is accounted for the Titans offense has lost 106 receptions for 1,432 yards and 13 touchdowns in free agency. Removing that type of production will impact an offense the following season. It will also impact the fantasy values of the players on that offense.