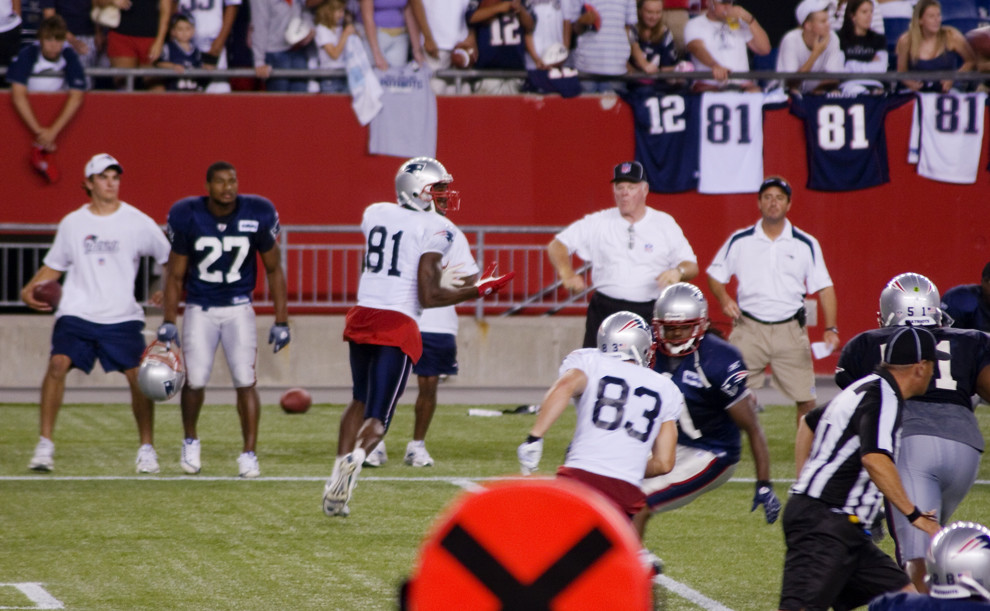 Tom Brady will begin his 22nd career NFL season this September, and his list of accolades has grown so enormous that there’s now no debate over who’s the greatest of all time. Brady has won seven Super Bowls and appeared in ten, while winning a whopping 264 out of 344 starts in his career. An entire article could be written solely summarizing Brady’s accomplishments, but by now, every football fan knows how great he is.

A more interesting discussion than a list of Brady’s achievements would be a look back at his teammates. Brady has played on some good teams, some very good teams, and some great teams, and he has undoubtedly been helped by various superstars whom he played alongside. There are a lot of greats who he’s played with, but this article will attempt to narrow down the top three of all time. The rankings are below.

#3 was probably the hardest spot to narrow down, as guys like Richard Seymour, Matt Light, and Tedy Bruschi can also make a case to be there. However, Welker’s dominance is an everlasting memory from the heyday of great Patriots receivers.

Welker joined the Patriots in 2007, where he proceeded to rack up 7,459 yards and 37 touchdowns over six seasons. Welker was a consistent threat for Brady out of the slot, and his years of dominance overlapped into both Randy Moss’ last years and Julian Edelman’s first.

The main argument against having Welker here is his lack of a Super Bowl win with Brady. However, despite that, Welker is still remembered as a prime Patriots WR, and mentioning his name instantly conjures up memories of the glory days. The name value for Welker is partly what helps his status in greatness, but that should not be overlooked, as those six years were about as dominant as a WR has ever been in the slot.

The fact that Moss only played 52 games as a Patriot certainly hurts his status, but as an all-time top-five receiver, he deserves to be this high. Moss made his hay in Minnesota, beginning his career with six straight 1,000 yard seasons, a record that stood until 2020, when he was surpassed by Mike Evans.

Gronk was a huge factor for New England during the second half of Brady’s career, and he was also crucial to Brady’s Super Bowl run with Tampa Bay last year. His ability to be a consistent vertical threat revolutionized the tight end position, and he’s probably the most talented tight end to ever play.

In 131 career games, Gronk has racked up almost 8,500 yards. As mentioned, however, he isn’t just some possession tight end, he averaged a whopping 15 yards per catch in his career. He has definitely struggled with injuries, missing 29 games in his career and leaving early in others. However, when he’s been on the field, he’s been fantastic.

Gronk has also had the benefit of appearing in many Super Bowls. Him and Brady have been to six together, winning four, which just shows how great he’s been. He has had major success in two-tight-end sets with Aaron Hernandez, but when it was just him, Gronk has shown that he can make plays anyway. His career has been marvelous, and his Super Bowl victories combined with a consistently high level of play make him the most legendary Patriot not named Tom Brady.