Why the Bills Will draft an edge rusher in round 1 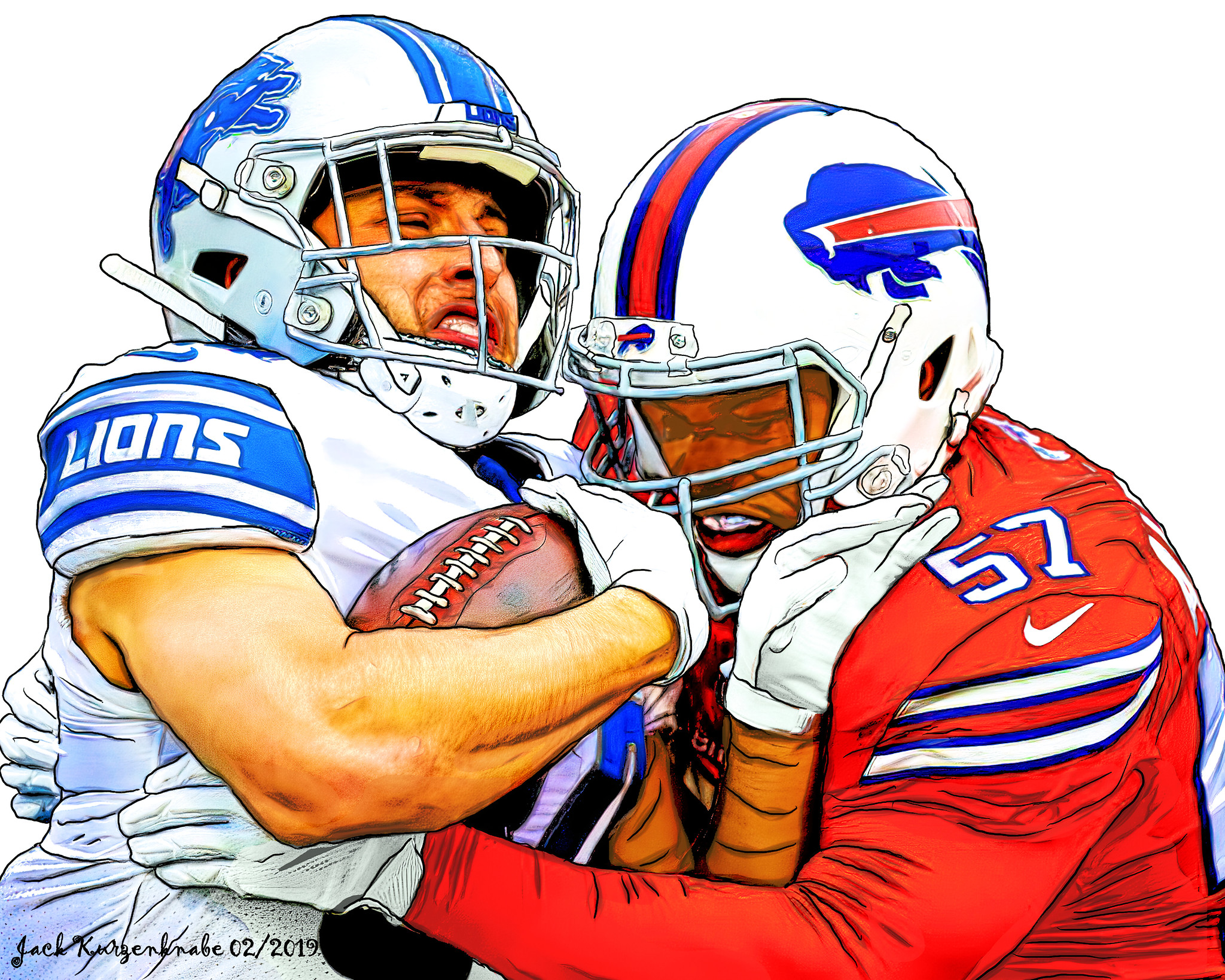 The first round of the 2021 NFL draft is taking place next Thursday, and the Buffalo Bills enter this draft picking 30th overall. There is no glaring need for the current squad Brandon Beane has put together, but with the uncertainty of the salary cap moving up exponentially in the immediate future, needs could become apparent as soon as next season.

The Bills have some important decisions to make on the 5th year options for both Josh Allen and Tremaine Edmunds and it is expected that both will have their options picked up. The salary for Allen’s 5th-year option looks to be around $22 million, while Edmunds’s option comes in around $13 million. That is $35 million that will count toward both of those players against the cap. The Bills right now have over $157 million counted toward the 2022 cap, and if you add the $35 million from both Allen and Edmunds, that does not leave a lot of room to address potential needs coming up.

The number one need most fans and analysts have talked about for the Bills is the cornerback position opposite Tre’Davious White. But there are other positions that certainly could be addressed in this draft. The Interior offensive line is a position to keep an eye on. Center Mitch Morse has two years left on his deal. He agreed to a pay cut in 2021 so he will be with the team for this season. But in 2022, Morse has a cap hit of $11.25 million and the Bills could save $7.5 million by cutting Morse after this season. Having a rookie learn behind a veteran center and even compete for the left guard spot would be ideal.

Other positions that could be addressed with a look toward the future are one-technique defensive tackle with Harrison Philips entering the last year of his deal and potentially cutting Star Lotulelei after the season. Taron Johnson is entering the final year of his deal so nickel corner could be an option. Both Emmanuel Sanders and Isaiah McKenzie signed 1-year deals this offseason so drafting a rookie receiver to take redshirt year may be a possibility. The Bills could also use a playmaker at running back despite using 3rd round picks in consecutive years at the position.

But in my eyes, there is one position that tops all the positions just mentioned. In 2021, the Bills look to have their starters at edge rusher in place. But after 2021, not so much. Head coach Sean McDermott and defensive coordinator Leslie Frazier love to use four-man rotations. The two starting edge rushers right now for the Bills are Jerry Hughes who will turn 33 years old before the season starts and Mario Addison will turn 34 before the season starts. Both of which are entering the final years of their deals.

Hughes has been with the Bills for 8 seasons and is the team’s longest-tenured Bill. Addison was signed last year to a three-year contract but restructured his contract this spring which makes this the final year of his contract. Between the two, Hughes would be the favorite to resign considering how long he has been with the team. But as previously mentioned, the Bills will not have much cap space next offseason, so the money will be at a premium.

The Bills already entered the last offseason with the most money allocated toward the defensive line. It came with mixed results. Lotulelei opted out late in the summer due to Covid which left a major gap in the middle of the defensive line. By opting out so late into the offseason, the Bills were forced to have players they signed last year, Vernon Butler and Quinton Jefferson, play out of position.

The Bills lacked size on their defensive front, which resulted in having a major issue in stopping the run. Beane mentioned in a recent interview on Wednesday morning with Adam Schein on “Schein On Sports”, “if you don’t stop the run, you can’t rush the passer.” With Star coming back, the Bills hope that he brings the size they desperately needed last year to help fix the run game.

Besides Hughes and Addison, the Bills also have A.J. Epenesa who was the team’s 2020 second-round pick out of Iowa, and Darryl Johnson who chips in on special teams as well. These are nice players to have as depth pieces and Epenesa certainly showed signs at the end of last year that he could be a nice player for them. The problem with that is Epenesa and Johnson are the only two players under contract in 2022. The free-agent crop at edge rusher looks pretty good for 2022, but the Bills will be locking in Josh Allen on a record deal and the Bills already don’t have a lot of space, to begin with.

“We’ll think long term more than short term,” Beane said in his pre-draft press conference with the media on Tuesday afternoon. “I think there are some other guys we have on the board, where we’re going: ”˜This guy’s one heck of a player, but he’s not going to start Day 1, but we will count on him and maybe in a year he’s going to be the starter.’ We’ll have a player that’s on the last year of their deal, and he’ll kind of back up that player, learn from him, compete with him, but we don’t necessarily expect him to start.”

I already mentioned that the Bills have Hughes and Addison entering the final year of their deals and adding a player at that position high in this draft will give that young player the opportunity to grow and develop and fine-tune their craft while not having to take on such a critical role for the team in year one.

This team is in their championship window with their quarterback still on their rookie deal, but they must now start to operate as if Allen has signed that lucrative contract. The Bills were in the middle of the pack in sacks last year despite spending the most money on their defensive line. This year they are fourth, and they must find ways without adding substantial money to the group to generate more production

Beane was also asked how he can try and stop Patrick Mahomes and the Chiefs to get to where they want to go. “You saw what Tampa did,” Beane said. “Their front really did a nice job versus Kansas City’s front ”” which affected (Mahomes). It got him off his spot.”

The Bills don’t have anyone right now on their roster that compares to who Tampa Bay has and what they were able to do. But when asked about this year’s edge rush class and what he looks for in prospects Beane gave his prototypical target. “You’d love to have the prototype size, length to long arm these tackles, an array of pass rush moves, the instincts,” he said. “Some guys, you see all the physical tools but maybe they haven’t been coached, you say, ”˜hey, we get him in our system, and we can get that fixed.’

There may not be a Chase Young or Nick Bosa in this class at the top, but there are certainly guys who can make an impact. The run-on edge rushers are expected to start in the middle of the first round. NFL Network analyst Daniel Jeremiah has mocked University of Washington defensive end, Joe Tryon, for the Bills. Jeremiah believes that even though the run on edge will begin before the Bills pick, there will still be plenty of options for the Bills at 30 including Tryon.

Tryon is a 6-foot-4 1/2 and 262 pounds. He has the prototypical size the Bills look for to play in their 4-3 scheme. He is not known for crazy speed but has excellent reactive athleticism with regard to body control and agility. He can set the edge and has a ton of versatility that allows him to even drop back into coverage as an outside linebacker. He has elite upside with pro coaching.

Draft Analyst Dane Brugler from The Athletic compares Tryon’s build to Marcus Davenport whom the Saints traded up for in the draft a few years ago.

The Bills prototype at the edge is around 6-foot-5, 260 pounds, and with an arm length of 33-plus inches. The best fits for the Bills at the 30th pick are Jaelan Phillips (Miami), Jayson Oweh (Penn State), Gregory Rousseau (Miami), and Joe Tryon (Washington).

4 reasons Why the Packers will get at least 13 wins again
Why the Eagles Will take a CB in the first round of the 2021 nfl draft
wpDiscuz
0
0
Would love your thoughts, please comment.x
()
x
| Reply