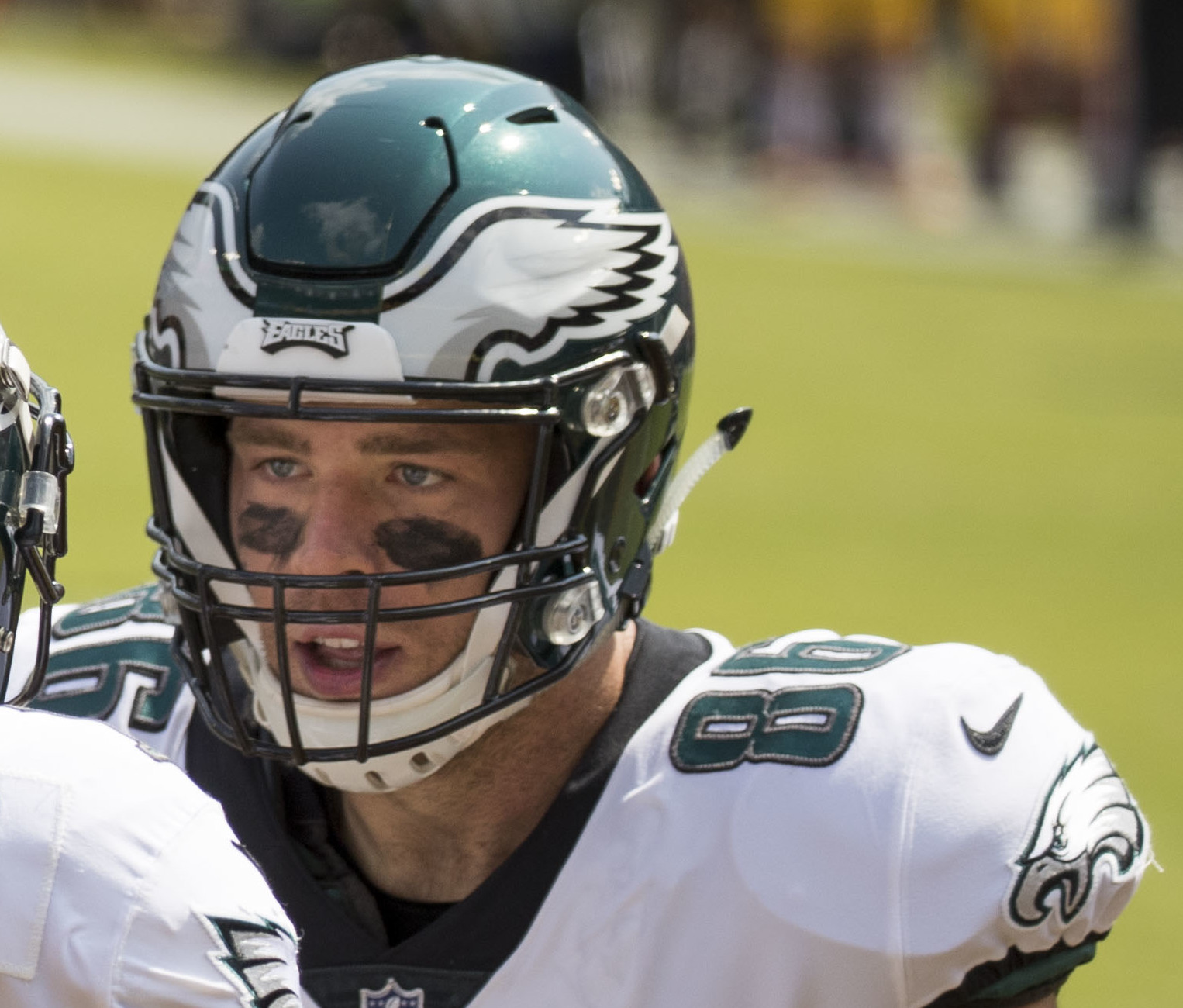 Where Will Eagles Zach Ertz Land?

The question all offseason has been when, not if, Zach Ertz would be traded. It’s now late April and Zach Ertz is still a Philadelphia Eagle. Make no mistake it’s not a matter of if this trade will happen, it’s a matter of when this trade will happen.  Philly is in salary cap purgatory and they are rebuilding. A 30 year old tight end with recent health issues on a large contract and who still holds value has no future on a rebuilding Philly roster. Let’s break down the reasons why a trade involving Zach Ertz has not yet happened as well as some possible landing spots and finally my prediction of where he ends up.

I think we can speculate on the many reasons why Ertz has not yet been traded.  First and foremost Ertz has a cap hit of $12.72 million this year and if he is cut or traded prior to June 1st his dead cap hit ($7.7 million) would be more than twice the amount if he was cut or traded after June 1st ($3.5 million). At this time we can only speculate which option fits the Eagles long term plans better. If they cut or trade him prior to June 1st the dead cap is obviously more expensive and immediate but it takes effect this season. If the Eagles wait until after June 1st the dead cap will be significantly less but the dead money will affect next year’s salary cap. If I’m the Eagles I know my team isn’t ready to compete for a Super Bowl this season and I would jump start this rebuild and take the dead cap hit this year much like they did with Wentz and not push any dead money into the future.

Secondly, Ertz is coming off an injury derailed season and he will have to pass a physical for the team that trades for him. A little additional time to heal and recover will certainly help with this process.

Thirdly and possibly most importantly, I’m sure the Eagles are working to find the best return for their former pro bowl tight end. Let’s take a look at the best possible landing spots for Ertz.

I think we can easily make an argument for over half the teams in the NFL on why Ertz would make an immediate impact for their team. Another reason for this is because tight end is not a deep position group in the NFL and only a handful of teams have a true defacto #1 starting TE. I have narrowed the list of teams that I believe could acquire Ertz to those listed below.

Indianapolis Colts – The Indianapolis Colts make a ton of sense. They are a team ready to win now, the coaching staff is intimately familiar with Ertz after coaching him for several seasons and we already know that the Carson Wentz to Ertz connection is as real as the similarities to their last names. Let’s get the no-brainer selection out the way.

San Francisco 49ers – Last offseason all we heard were rumors on how the 49ers wanted to pair another great tight end with George Kittle. Although the 49ers settled for Jordan Reed the last offseason there has been no talk of it this offseason which I find strange especially when Kittle was injured for much of last year. If anything you would think they would be even more focused on finding a second great tight end now. Factor in that they are also drafting a young QB at pick 1.3 and they are a Super Bowl contender who has had issues with their offensive weapons staying healthy and I would say the 49ers not only should want another weapon at tight end but they need another weapon at tight end. It is especially helpful to young quarterbacks to have that tight end safety valve and to put it into simplistic terms, two is better than one.

Carolina Panthers – The Panthers have been in need of a quality tight end since Greg Olsen’s early 30s. They also just traded for Sam Darnold and if they want to give the guy every chance to succeed then they need to surround him with weapons and an offensive line. I think they work on the offensive line in the draft so trading for Ertz makes a lot of sense.

Seattle Seahawks – Seattle has wanted a great tight end for years and it has just never worked out. If they really want to make Russ happy and try to repair the relationship they once had they need to fix the offensive line and get him a new toy at tight end. Based on the lack of superior tight end options in the draft and their lack of draft capital Ertz should be a target.

Buffalo Bills – Buffalo is just a few pieces away from being a Super Bowl contender and tight end is one of those pieces. They have also shown the willingness to be aggressive to fill their needs after last season’s trade for Stefon Diggs. Now is the time Buffalo needs to make another big trade to solidify this passing game.

Baltimore Ravens – Baltimore is in win-now mode and they have been working hard all offseason to improve their wide receiver unit. Although they had to settle for Sammy Watkins up to this point, they should seriously consider running a two-tight-end offense and have Ertz join forces with Andrews. This would take a lot of pressure off of Lamar Jackson and allow him to continue to work the middle of the field in the passing lanes while Hollywood and Sammy stretch the field on the outside.

Tennessee Titans – Tennessee lost some big-time weapons this offseason in Jonnu Smith and Corey Davis. They are likely to make an attempt to replenish that depth in the draft but they are also a team on a short-term window to win now so acquiring a player like Ertz makes a lot of sense. He would immediately become the #2 option in the passing game trailing only the great AJ Brown.

Los Angeles Chargers – The Los Angeles Chargers are an ascending team with a young and intriguing quarterback and a new coaching staff. Yes, they did sign Jared Cook in free agency but Ertz would be a huge upgrade on the depth chart and have a significant impact in helping Justin Herbert’s ability to continue to grow and win some football games. They are also in many people’s eyes the #2 team in Los Angeles so not only would this move help win football games but it would help them take a little bit of the market back.

Finally my prediction: Zach Ertz will be traded to the Indianapolis Colts for a 4th rd pick.  There are too many connections here for this not to work out, the team need, coaching staff familiarity, quarterback connection, available salary cap, and most importantly a contending team that is ready to go get that ring!