Top 5 CBs in the NFL: Who is number one? 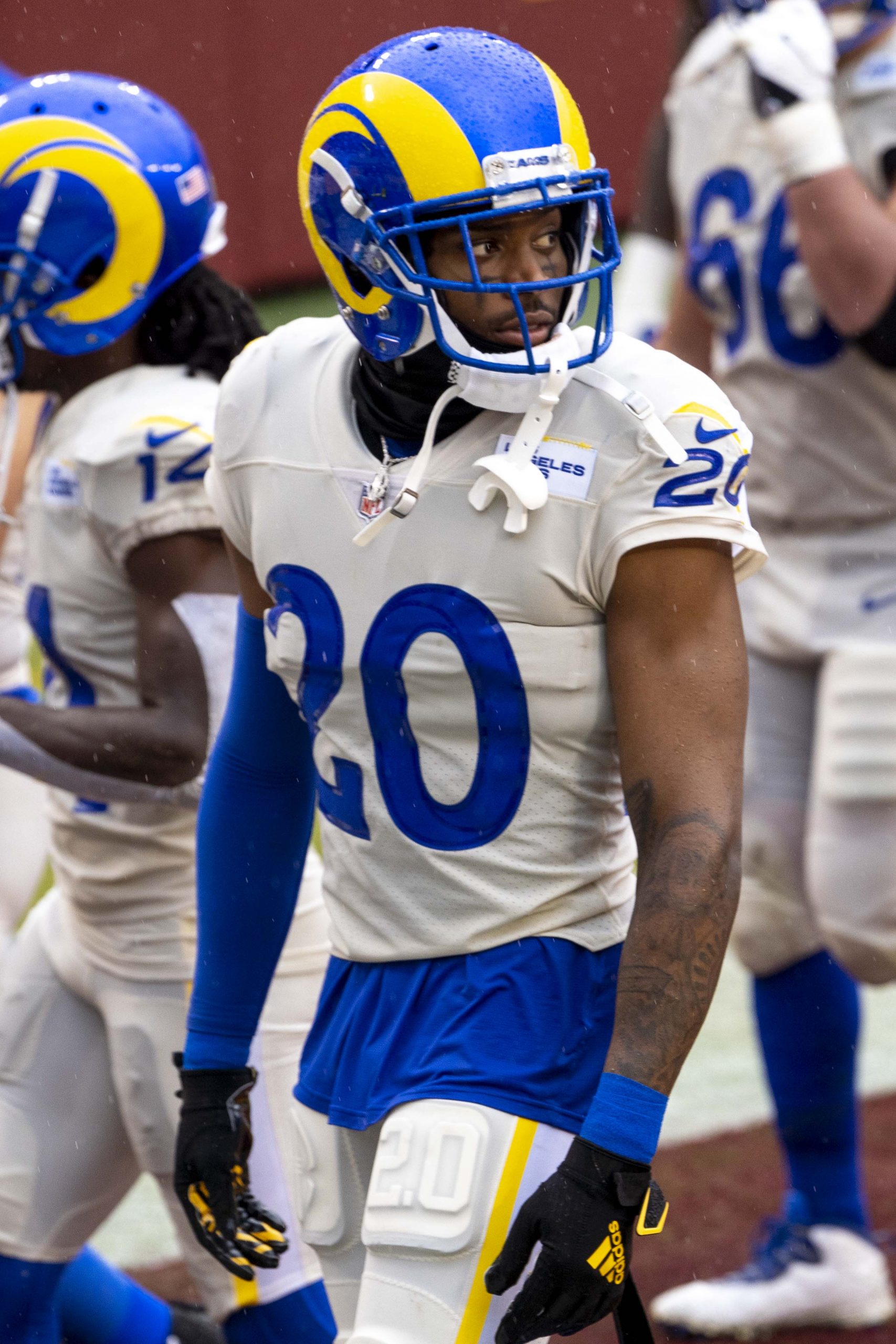 Who is the best corner in the NFL?

Contrary to popular belief, some of the most elite athletes in the NFL do not play on the offensive side of the ball. Sure players like Patrick Mahomes and DeAndre Hopkins showcase their athletic prowess weekly, but what about the silent assassins that are paid to shut them down? NFL cornerbacks are not just failed wide receivers. They are highly skilled technicians with a specific skill set that often gets overlooked.

To support my rankings, I will of course be using statistics. The funny thing about stats, though, is that they can be twisted and shaped to fit pretty much any narrative. For example, if a cornerback is giving up a 95% completion rate to opposing quarterbacks, you probably would not be impressed with that stat. However, if I further stated that this cornerback was only being targeted twice per game, then it would not surprise you that his NFL team is paying him $20 million a year to do his thing.  The key to using stats effectively is to utilize a blend of them to ensure balance and accuracy in the evaluation.

So what measurables are the best and most accurate? The defensive statistic that I have seen most often used when discussing cornerbacks is average yards given up per game. So I’ll start with that one. But I am also going to sprinkle an opponent quarterback’s completion percentage when targeting the specific cornerback as well as the quarterback’s rating (QBR) in those specific targeted throws. The last metric I am going to use is a combination of the ”˜eye test’ with play-making ability. Here I will be looking at the specific cornerback’s totals in these categories: interceptions, passes defended, forced fumbles, fumble recoveries, safeties, tackles. This last category not only allows for big play capabilities, in a roundabout way it measures total amount of playing time. Now what I have come up with is not a perfect mix of measurables by any means but at the very least, it provides a starting point for an intelligent discussion about who is the NFL’s best cornerback. Here is the list:

So here we are. I knew this was going to be a controversial pick the moment a buddy of mine told me that I had spelled Stephon Gilmore incorrectly. All eyerolls aside, and before you start hammering away on your keyboard there, hear me out. How Gilmore got a Pro Bowl nod over Jackson is beyond me. In his third season in the league, Jackson outperformed Gilmore by a wide margin. In 11 games, Jackson 14 passes defended, 9 interceptions, and 3 fumble recoveries. Gilmore managed 3, 1, and 1 respectively. Although Gilmore’s season was ended by injury, it seems as though Gilmore got elected to his fourth Pro-Bowl more out of reputation than actual performance.

In terms of our other metrics, Jackson crushed those as well. In terms of yards allowed per game, Jackson gave up a very respectable 43.2 yards allowing opposing quarterbacks to complete only 59.0% of their passes on 83 targets. The league average for quarterback completion percentage in 2020 was 65.2%. In terms of quarterback rating, Jackson limited opposing QBs to an exceptional 66.5, much lower than the NFL average of 93.6. After learning from the King for the past three years, the 25-year-old, undrafted as a rookie, has reached the upper echelon of the NFL’s elite cornerbacks.

When I think of the Baltimore Ravens, I think of a team that plays smash-mouth football on both sides of the ball. The stellar defense has always been a trademark of this team and this again proved true in 2020 as the Ravens were ranking #2 in overall defense. And with his second Pro-Bowl award in as many years, Marlon Humphrey is quickly making his way up the list of NFL’s best corner.

Humphrey was the most targeted cornerback on this list. Opposing quarterbacks took their shots Humphrey’s way a total of 106 times in 2020, completing 61.3% of their passes. That translated into a below-average QBR of 84.3 and 40.7 yards per game allowed. Where Humprey ruled them all, however, was in playmaking ability. Humphrey had 82 tackles, 11 passes defended, produced a league-high 8 forced fumbles, had 2.5 sacks, 1 interception, and scored on a safety. There is definitely a dynamic duo in the Ravens’ defensive backfield but it’s Humphrey, not Peters, that makes the list.

At times, the Green Bay Packers’ run defense looked lost. Yet somehow, the Mike Pettine’s squad managed to claw its way up to 13th in total defense in 2020. A huge part of that was the Pro-Bowl calibre play of third year cornerback Jaire Alexander.

Alexander was dominant. Quarterbacks tried their luck his way 80 times in 2020 and Alexander shut it down for an astonishing 25 yards per game allowed. That was second only to Jalen Ramsey of the Los Angeles Rams. He also allowed a stingy 51.3% completion rate holding quarterbacks to a rating of 67.4. This all on a 13-3 team that saw lots of teams try and claw their way back late in games passing the ball. Want some icing on the cake? Alexander also had 13 passes defended, 51 tackles, 1 interception, 1 forced fumble, and both a sack and a safety. It is safe to say he did it all.

When the Los Angeles Rams pried Jalen Ramsey away from the Jacksonville Jaguars in 2019, they knew that they were getting the league’s most dominant shutdown corner. The 26-year-old was selected to his fourth Pro-Bowl and second First-Team All-Pro in 2020. Ramsey takes care of his business year in and year out and was a huge part in helping the Los Angeles Rams become the NFL’s best defensive unit in 2020.

Quarterbacks did their very best to avoid Ramsey’s side of the field in 2020. He saw the lowest target volume of any of the corners on this list. Ramsey allowed a meager 50.7% completion rate on 71 targets. Opposing quarterbacks combined for a poor 68.1 QBR against Ramsey,  who gave up the fewest touchdowns on the list with two. His 23 yards per game allowed were the second-fewest in the league.

In terms of big plays, Ramsey was there when called upon. He made 44 tackles, defended 9 passes, had 1 interception, and basically shut down an entire defensive side of the field for the Rams. There is nothing that Ramsey cannot do at the position and that will be evident one day when he is awarded his gold jacket in Canton, Ohio.

In 2018, Xavien Howard led the NFL with 7 interceptions and 12 passes defended on his way to his first Pro-Bowl. A knee injury in 2019 limited Howard to a disappointing 5 games played with not really much to talk about. But after some extensive rehabbing, Howard set his sights on getting back his crown as the league’s most dominant cornerback.

NFL quarterbacks definitely took their shots at Howard during the 2020 season but with little success. When targeting Howard, quarterbacks completed an abysmal 51.5% of their passes in 101 attempts. That led to a 48.3 QBR, way below the league average. And considering all the action that went Howard’s way, his 44.9 yards per game allowed is commendable.

Howard was king of the big plays in 2020. His 10 interceptions and 20 passes defended lead the league, and he added 51 tackles and a forced fumble. The 27-year-old was named to his second Pro-Bowl and first First-Team All-Pro. Howard has now tallied 22 interceptions, 191 tackles, and 55 passes defended in just 56 games. We won’t say Canton yet, but Howard, right now, is the best shutdown corner in the game.

Why Daniel Jones is the ultimate Sleeper QB in the NFC
Jordan Love: What we should know about the QB
wpDiscuz
0
0
Would love your thoughts, please comment.x
()
x
| Reply