What the Saints could offer in a Rodgers trade 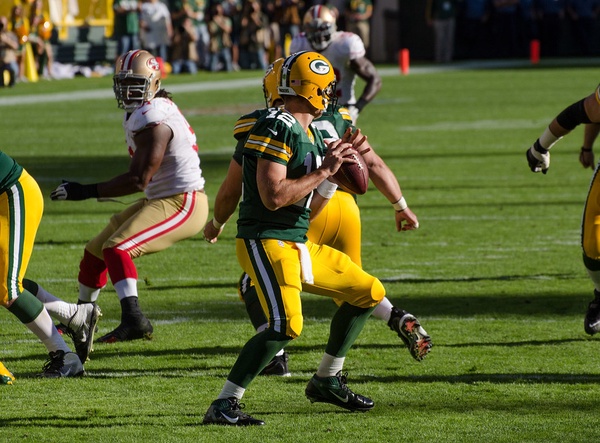 The Aaron Rodgers potential trade saga continues as he clarified how he feels while talking to Kenny Mayne on SportsCenter Monday night. Rodgers verified the earlier reports about him being upset with the front office and how they’ve handled roster decisions in recent years. I cannot say I blame him, there have been some poor roster-building decisions the past few years. With all these reports and now the Aaron Rodgers interview, there has been a lot of chatter about potential trades that may interest Green Bay enough to pull the trigger and deal Rodgers away. One of the teams I haven’t seen much Rodgers trade talk about is the New Orleans Saints. So, I thought it would be a fun exercise to build hypothetical and, hopefully, semi-realistic trade that ends with Rodgers on the Saints.

One thing to think about with these trades is making the cap work with it all. I’m no cap guru, so I don’t plan on getting too detailed with that side of things. This will be more about a package that would interest the Packers enough to engage in a trade talk with the Saints. First, any trade for Rodgers will start with first-round draft picks. Two seems like the absolute minimum that Green Bay would accept, and that’s only if they are getting at least two young players with potential. Realistically, it would start with three first-round draft picks. As I mentioned, the other interest of the Packers would be relatively young players that are either already high producers or have a lot of potential to aid with the rebuild that is surely happening if Rodgers is traded away.

With the players part of the trade, the Saints actually have quite a few players that would likely intrigue the Packers. The Saints’ players I believe that the Packers would be most interested in for a Rodgers trade are Michael Thomas, Marshon Lattimore, Ryan Ramczyk, C.J. Gardner Johnson, and Zack Baun. Michael Thomas is one of the best receivers in the game, and the Packers would surely be interested in him. Marshon Lattimore is in a bit of legal trouble, but assuming that it doesn’t end with him in serious trouble, Lattimore is someone that the Packers would definitely be interested in. He has been a high-level starter at CB for the Saints since being drafted, and that fills a direct need for Green Bay. Yes, they drafted Eric Stokes in the first round just a few weeks ago, but he is not a sure thing.

Lattimore alongside Jaire Alexander would be the best CB room in the league. The only complication with Lattimore is that 2021 will be the last year of his rookie deal, and he would need to be extended. Having some interest in C.J. Gardner Johnson and Zack Baun is a similar story as to why the Packers would have interest in Lattimore. Both Gardner Johnson and Baun have shown to be effective starters at positions of need for the Packers. Gardner Johnson would allow Savage to roam around and be a playmaker, and Baun would instantly upgrade the pass rush while making it a lot more consistent. The last obvious player that the Packers would inquire about is Ryan Ramczyk. Ramczyk has been a great tackle for the Saints and you can never have enough talent at OT.

Now, I just threw a lot of names out there, and I realize that not all would be available. The most realistic trades seem to be a combination of three first-round draft picks and one or two of the players listed previously. I would not be surprised if Michael Thomas and Ryan Ramczyk are not moving right now, so that leaves us with Lattimore, Gardner Johnson, and Baun. So, here is the trade that makes the most sense to me:

I know some will think this is a steep price, but we are talking about a 37-year-old elite QB coming off of an MVP season who recently said he wants to play well into his 40s. Ultimately, you’re trading for a top 5 QB that gives you a chance at a Super Bowl any year he stays healthy. This is likely close to the asking price from Green Bay, and I believe that teams would be willing to pay that in order to compete for a Super Bowl for years to come.

3 reasons why the loaded Dolphins should ink Melvin Ingram
What Is The Ceiling for Tim Tebow In Jacksonville?
wpDiscuz
0
0
Would love your thoughts, please comment.x
()
x
| Reply