Is Ndamukong Suh a future Hall of Famer? 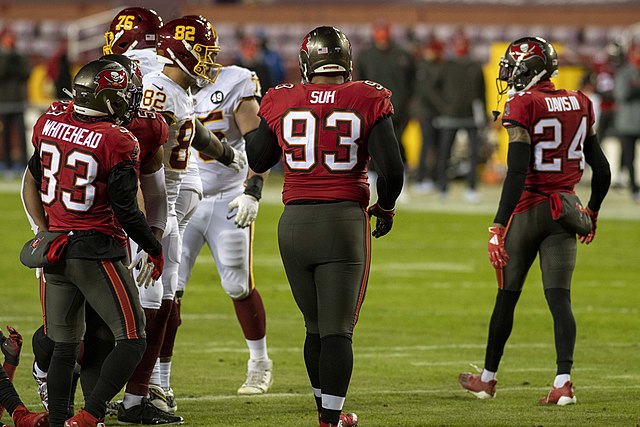 Is the legend Suh a future Hall of Famer?

The fearless Ndamukong Suh, also known as Aaron Rodgers’s nemesis, has been a pillar of top-notch play at the defensive tackle positive over the past decade. Suh won Defensive Rookie of The Year, made five Pro Bowls, and impressively cracked three first-team All-Pro teams in his football journey thus far. Furthermore, he managed to win his ever-elusive Super Bowl ring with TB12 in the 2020-2021 season.

The 35-year-old Suh hasn’t decided to hang up his cleats this off-season and it seems likely that he will join a team with the combination of a strong fit and a very competitive roster. I would expect the Cleveland Browns, LA Rams, Miami Dolphins, and the Dallas Cowboys to be logical destinations for him.

Whether or not Suh keeps competing in-between the white lines, Suh’s resume is quite superb in 2022. With that said, there are many NFL fans and obsessors over Suh’s highlights asking: Is Suh headed to Canton?

It’s safe to say that there are legendary DT/DL in the HOF and it may seem like Suh isn’t on the same wavelength as a lot of the insane DTs in football heaven. There are DT faces like the six-time All-Pro John Randle, the potential better version of J.J. Watt in Reggie White, and the unstoppable (and very succesful) Warren Sapp.

Suh may not be as dominant as the greek-god DL previously mentioned, but he still has top-tier success on a few occasions and he has the pivotal SB ring. His friendly and former head coach Bruce Arians may be biased, but BA stated that Suh has a strong chance to end up in the HOF. If Suh can win a second SB ring on a juggernaut team, he should be a lock to be a HOF. If Suh can’t ride out into the sunset, I would still be shocked if the well-rounded DL still doesn’t give a HOF speech at some point in the future.