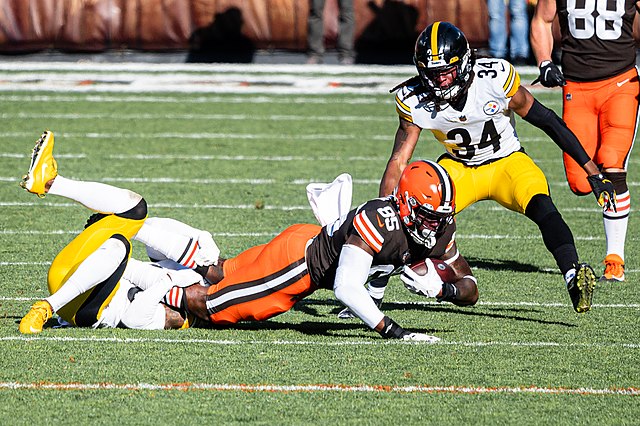 Who is the most overrated player on the Steelers?

The Pittsburgh Steelers are developing new chemistry in the Big Ben-less era, so the team in Gotham needs to strive to be more well-rounded moving forward. With that said, I’m going to simply untwine three underachieving players that need to improve in 2022.

I know that Steelers nation wants to put Devin Bush in a pillory and throw tomatoes at him forever. Bush hasn’t lived up to expectations in his short career thus far: After a strong rookie season, Bush played in only five games his sophomore season, and then he was a flat-out liability in his third season. PFF handed him a 34.4-grade last season and it was obvious that the Steelers weren’t feeling warm and fuzzy with their LB spot entering the 2022 off-season. Myles Jack was brought into the building and they also hired Brian Flores, who has also impressed the LB group thus far. Hopefully, Bush can turn the corner in his contract season.

The Steelers might be unpleased with their 2019 draft choice in Devin Bush, but they are also hoping the 2018 draft pick Terrell Edmunds can turn around his career. Edmunds has been a bust in his career thus far, but he has a unique set of strengths and weaknesses. The Jets X-factor outlined how Edmunds gave up 4.7 yards per reception in man coverage last season, which was eighth-best among safeties. Although, it would be an understatement to say he was abysmal against the run in 2021. He ranked 34th by PFF against the run, which was second-worst among safeties.

The Steelers planned on giving Mason Rudolph an opportunity to be the QB1 after the playoffs, but it’s clear that things have changed. Mitch Trubisky is the clear QB1 at the moment, while Kenny Pickett may have more potential than any other QB2 in the league. Despite the kind thoughts that Tomlin expressed for Rudolph prior to the NFL combine, the reindeer QB clearly didn’t show enough in his tenure to gain a lot of hope/reps after the 2022 NFL draft. He may also be traded this off-season or before the trade block in the season.