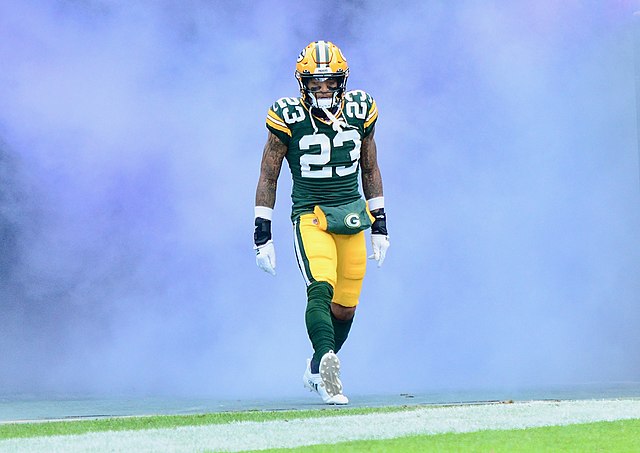 The Green Bay Packers extended their star cornerback Jaire Alexander to a four-year contract worth $84 million dollars this off-season. Alexander leads a Packers CB unit that displayed three faces in PFF’s Top-32 CB rankings. In fact, the Packers CB1 was impressively ranked as the second-best CB in the league (right after Jalen Ramsey).

The new utterly wealthy CB has expressed personal motivation and hope for the Packers young CB group. He talked about his lack of production and presence in the Packers recent playoff loss. Per PFT, he stated, “It was super bitter, man. I was only in for less than 10 plays, and I missed a tackle. I was so upset that missed tackle.” He elaborated that the missed tackle fueled that motivation. Vince Papale was famous for finding motivation by keeping a cruel note from his ex-wife, while Alexander nicely gained fire by reminiscing about a weak tackle.

The Packers opted to not bring back Kevin King/Scotty Miller’s alter ego this off-season (yet), as they feel confident in Eric Stokes and Rasil Douglas. Stokes was a glue-like CB as a rookie, yet he has plenty of room to grow. He dropped five potential interceptions a season ago. Meanwhile, Douglas (ranked three spots behind Stokes by PFF) was a delightful surprise and a rock star in 2021. He had a whopping five interceptions (including two pick-6s). The late-blooming CB in Douglas still has two years left on his Packers contract, but he may earn a massive extension in 2023.

The Packers defense could really feel more confident against the likes of Tampa Bay and Los Angeles if Stokes can grow in his second season and Douglas continues to be Jackrabbit 2.0. The Packers are pushing for a Super Bowl and they could benefit from adding a familiar face or a veteran presence. The Packers could reunite with Kevin King on a team-friendly deal. Below are other FA CBs still available: