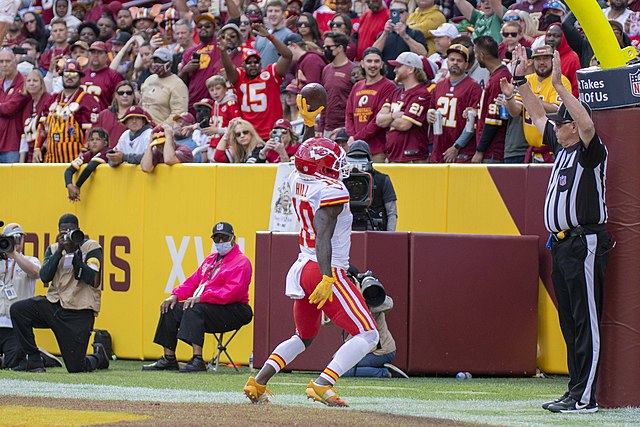 The Miami Dolphins arguably have the most explosive WR tandem in the league. Tua Tagovailoa will gratefully develop with the precious armory in Tyreek Hill and Jaylen Waddle in 2022.

Hill has already felt a positive vibe with his quarterback. Per PFT, Hill believes that Tua has better accuracy than his previous QB Patrick Mahomes. It’s obvious that the former Alabama QB will have more bliss and effort in each long bomb directed at the former Chiefs wideout moving forward.

Hill wasn’t a quality WR as a rookie, but he did make the All-Pro team as a special teamer. Afterward, Hill had five straight Pro Bowl seasons at the WR position (including All-Pro honors in 2018 and 2020). His best season in receiving yards was 2018: 1,479 yds. Flash also recorded a career-high 15 touchdowns in 2020.

His WR partner is coming off a spectacular rookie campaign: 104 receptions, 1,015 yds, and 6 touchdowns. Waddle should really blossom with excellent match-ups as the WR2 deep down the field and with screens. He recorded a 78.3 grade by PFF last season. Fantasy Pros also ranks Waddle as the 12th best WR in dynasty PPR (one spot after Hill).

The Dolphins WR3 Cedrick Wilson may lose his sleeper tag by the mid-point of the upcoming season. He is coming off his best season in 2021 (45 receptions, 602 yds, and 6 touchdowns). Dolphins Wire noted how Wilson had an average yards after reception of 5.6 last season – which ranked ahead of Hill (4.0) and Waddle (4.2) in that department. Wilson will also have a strong role in the slot. PFF outlined that he had 90% of his snaps from the slot, so he should have plenty of opportunities next to the Dolphins big two WRs.

The Dolphins had the 18th-best passing offense last season, but Tua is really primed to steer the Dolphins into an offensive juggernaut while being one of the most underrated AFC QBs.