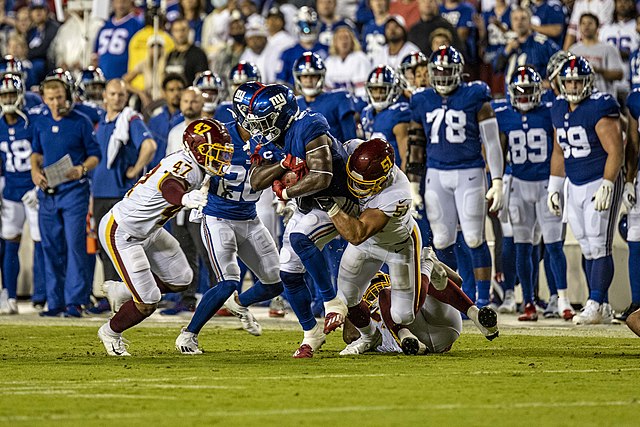 The New York Giants may be the most underlooked NFC East team, but they have a hulk (also known as Saquon Barkley), more offensive line talent, and strong, new coaching faces. With that said, I’m going to untwine the highs, lows, and overall record of the 2022-2023 Giants.

The Giants are ascending while the Titans are crumbling and I believe the Giants have a stunning 28-14 victory.

Week 2: vs the Panthers

The Saquon Barkley-led Giants face another greek god-like RB in Christian McCaffrey in Week 2. I’m not convinced that the GMEN are playoff destined, but I trust that Don Martindale will cook up something to stir Sam Darnold’s feathers. The Giants win 21-17.

Week 3: vs the Cowboys

This match-up has the making of a potential upset, but the Cowboys WRs should give the Giants secondary issues. I believe the Boys win a competitive NFC East battle 28-21.

Week 4: vs the Bears

The Giants pass rush will feast on the young Justin Fields at home – as the Giants pick up their third victory by a score of 24-10.

Week 5: at the Packers

Aaron Rodgers and the rook Christian Watson will have a big victory at Lambeau, as the Packers win 38-24.

Week 6: vs the Ravens

The Giants could feel confident about the lack of big-time wideouts in Baltimore, but the Ravens still carry an elite secondary that should give Danny Dimes problems. I expect the Ravens to win 24-14.

I love the overhaul of talent by the Jags this off-season. Although, Barkley could really mow down the Jags front seven and give his defense rest. All in all, I forsee Trevor Lawrence leading the Jaguars to a 24-21 victory.

The 2022 Seahawks are very similar to the 2021 Giants in my opinion. I expect Jones to really shine with this opportunity against a mediocre Seahawks defense and the Giants to win 35-21.

The Giants can absolutely knock off another rebuilding team for the second straight week. The Giants should have an impressive victory by a score of 28-14.

I believe the Giants will be ready to block Aidan Hutchinson and Jones will bring more fireworks than Jared Goff to the party. The Giants will win 35-21.

The Giants face a brutal schedule from Week 12 and beyond. I expect the Boys to sweep the GMEN and Dak should throw 4 touchdowns in a 35-21 Cowboys victory.

Week 13: vs the Commanders

I actually believe the Giants can defeat (and split games with) the Commanders at home in a close 21-17 victory.

I don’t love the Giants’s chances against Philly next season and the Eagles should win 28-14 in their first battle.

Week 15: at the Commanders

The Commanders should bounce back in their second contest and Scarry Terry should thrive in a 21-17 Commanders victory.

Justin Jefferson and Adam Thielen should give the Giants pass defense serious issues – as the Vikings pick up a 35-21 victory.

The Colts could be on upset alert if the Giants slow down JT, but I believe Matty Ice will most likely have a clutch performance at this point of the season and the Colts will win 27-17.

The GMEN should have a tough time beating the Eagles in either divisional battle. Hence, I feel the Eagles have a pivotal, monster 28-14 victory.