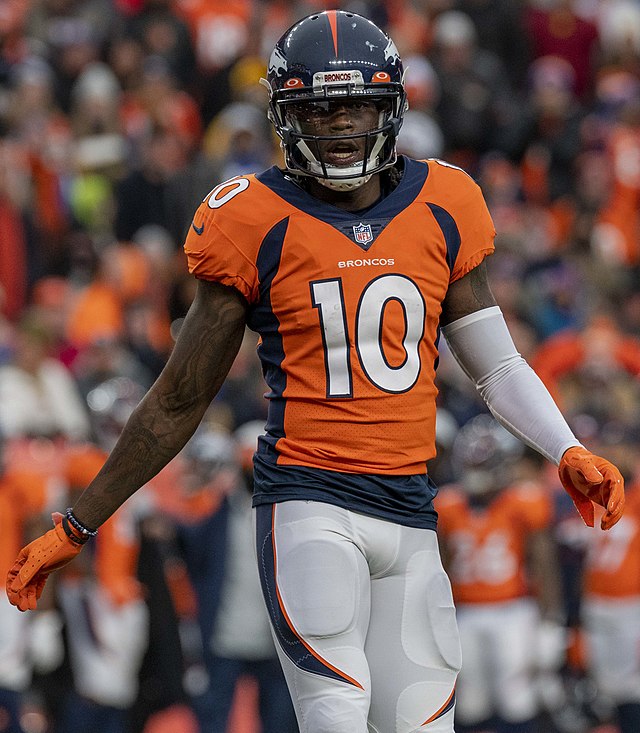 What is Jeudy’s dynasty outlook in 2022?

Jerry Jeudy, despite being a disappointment from a results standpoint, is still viewed extremely favorably by the dynasty community. In his 26 games, Jeudy’s produced just 90 catches, just over 1,300 yards, and just 3 TDs (all as a rookie). This is similar to a typical DJ Moore season but in 9 extra games. So is it just take lock, or does the dynasty community have it right?

The first place to look with Jeudy in 2022 is the head coach. Vic Fangio is out and in is offensive-minded Nathaniel Hackett. That move alone inspires confidence. Over the last few seasons, Hackett has worked in Green Bay to build a strong balanced offense. In his three seasons there, the Packers finished 15th, 1st, and 10th in points per game, averaging at least 23.5. The best team under Fangio was at 20.2 and hasn’t been better than 23rd in points.

Hackett prefers the pass more than Fangio did, as the Packers bested the Broncos in pass attempts in two of their three seasons in their previous roles. Fangio liked to run the ball and play defense to protect middling (at best) QB play. Hackett didn’t have the same issue with Aaron Rodgers in town. Unfortunately, Rodgers stayed in Green Bay and left Hackett scrambling to improve his QB play in Denver…

Enter Russell Wilson, the Broncos biggest offseason addition since Peyton Manning. Wilson seems primed to explode this year after wasting away in a conservative offense his entire career. If he does, expect multiple pass catchers to follow suit, with Jeudy being a popular pick.

Wilson loves to push it downfield but hasn’t had a true possession receiver since Doug Baldwin retired. In his peak years, Baldwin saw around 120 targets per season in the Seattle run-first offense, catching about 80 passes per season for over 1,000 yards and 9 touchdowns. Jeudy already earned 113 targets as a rookie, and likely would’ve again in 2021 if not for a bad high ankle sprain.

As a reminder of how Broncos brass sees Jeudy, they drafted him over CeeDee Lamb, Justin Jefferson, and Brandon Aiyuk. Many in the dynasty community followed suit and took him (or Lamb) as the first or second WR in rookie drafts. Managers might be getting tired and worried about him. I get it, if he doesn’t perform this year expect his value to fall off.

People are quick to forget how good Jeudy was as a prospect though. Jax is such a great prospect evaluator, and I absolutely love the Stefon Diggs comp and still am excited about it. Diggs’ first two seasons aren’t all that dissimilar from Jeudy’s. Diggs had some solid seasons for a few years after that, kind of up and down though. Then he was traded to Buffalo…

What happened when Diggs got a massive QB and scheme upgrade with the Bills? First team an all-pro year of 127 catches, 1,535 yards, and 8 touchdowns. Now don’t get it twisted, this is unlikely as the talent around Jeudy is much better, but Diggs baseline is around 100 catches, 1,100 yards, and 6 touchdowns. Same with a healthy and playing Calvin Ridley. This could be the year Jeudy joins them.

What To Do With Jerry Jeudy?

Look I just sang his praises and absolutely think Jeudy has a shot to break out in a huge way this year. I want to say buy him, but the price on him really hasn’t dropped enough. He’s a tough sell too, as so many pieces valued similarly are other young potential breakouts.

It’s not a clear-cut buy or sell, I think I’d hold out to see if the other manager in a deal has a different valuation than the group, then try to take advantage. If firmly in win-now mode, think obtaining a Mike Evans or Mike Williams in a deal is possible, and it’s hard to pass on WR1 production.