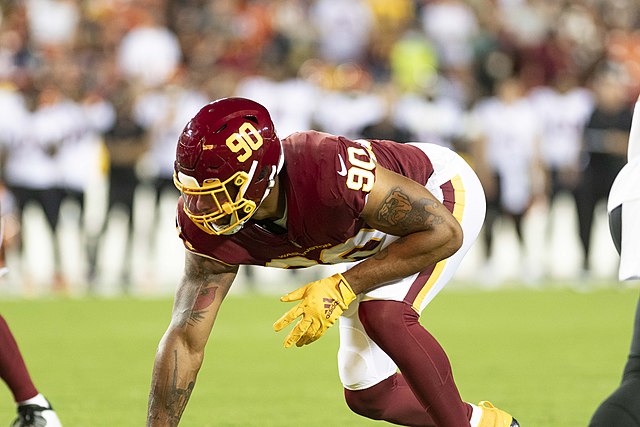 Who is the most underrated pass rusher?

The NFL is a passing league — which means it’s also a pass-rushing league. The 2022 DROY winner was T.J. Watt, who unveiled 22.5 sacks and tied Michael Strahan’s sack record. The NFL world is all too familiar with Watt and Aaron Donald in this day in age. Hence, I’m going to untwine five pass rushers that are under-the-radar and could turn heads in the upcoming season.

The Washington Commanders pass rusher Montez Sweat had 16 sacks and 33 QB hits in his first two seasons combined. Unfortunately, he didn’t have a spectacular 2021 season — largely because he missed seven games. Sweat is healthy and he is playing across from an ascending pass-rusher in Chase Young. I expect Sweat to really benefit from the attention that the former DROY will warrant in 2022.

The days of Chandler Jones having 5+ sacks in a single contest for the Cardinals is over. Jones is in Las Vegas, so the Cards defense will lean on Markus Golden to be a Pro Bowl-caliber player. Golden impressively had 11 sacks, 19 QB hits, and 10 TFLs last season. Golden has had two 11+ sack seasons without a Pro Bowl berth. He will work towards his first Pro Bowl season in 2022 — as a healthy J.J. Watt (10 missed games in 2021) on the IDL should help him get quality production moving forward.

The Saints pass rusher Marcus Davenport is easily the most underrated player on the Saints. The Saints HC/former Saints DC Dennis Allen referred to him as the best player on the Saints defense in the early part of 2021. Unfortunately, Davenport has serious injury habits (11 missed games in the past two seasons combined). He was still able to have 9 sacks and 16 QB hits last season. PFF gave him an unearthly 88.8 grade, as well. If he can stay healthy for 15+ games, he could wind up with All-Pro honors.

The Buffalo Bills may have inked a future Hall of Famer in Von Miller, but it’s important to not forget about Gregory Rousseau coming off the edge. The 2021 first-round pick was labeled the Bills x-factor by Bleacher Report. He had 4 sacks as a rookie, but he could really blossom in year two with Miller on the other side. It also helps that he has Leslie Frazier, who was named the NFL’s best play-caller by Pro Football Focus.

The Dolphins pass rusher Emmanuel Ogbah has 18 sacks in the past two seasons combined. PFF gave him a strong 77 grade, as well. He should definitely benefit from the Dolphins bringing in Mike McDaniel, Tyreek Hill, and the entire direction of the Phins offense. Due to the impending fireworks from the Phins new-look offense, I surely expect opponents desperately trying to keep pace with the Phins offense. Hence, the Dolphins pass rushers should have a plethora of sack opportunities moving forward.