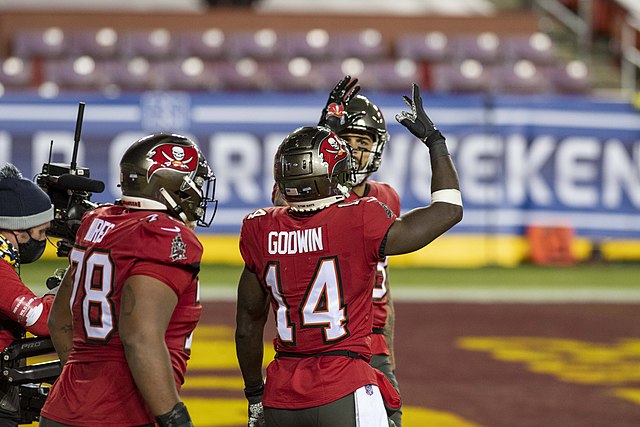 What is the Buccaneers wide receiver outlook right now?

The Tampa Bay Buccaneers display a Prometheus-like wide receiver group. The mighty Mike Evans, elusive Chris Godwin, and underrated Russell Gage are expected to be major receiving weapons for Tom Brady. PFF ranked the Bucs WR group as the second-best WR unit in the league. It’s clear that the almost 45-year-old Brady should feel thrilled about his weaponry – as he chases Michael Jordan and seeks one more Super Ring in the near future.

Evans is the only WR in NFL history to have registered eight straight 1,000+ receiving yard seasons. He will turn 29 in August, but it seems clear that he should unveil a few more Pro Bowl-caliber seasons in Tampa. Meanwhile, his sidekick, Godwin, unveiled 1,103 yds in his last 14 games, while garnering an 81.3 grade by PFF.

Antonio Brown may be an enemy of the Florida State, but he certainly was an x-factor for the Bucs offense in their recent Super Bowl victory. Russell Gage (averaged 778 receiving yds in past two seasons combined) needs to excel with his match-ups as the WR3.

The Bucs have numerous underrated wideouts after their big-three WRs. Tyler Johnson, Breshad Perriman, and Scotty Miller will be quality depth pieces. Johnson ousted 360 yds with the Brady bunch last season. Perriman knocked out a career-high 645 receiving yds and 6 touchdowns in 2019. He could be a productive deep-threat weapon and perhaps he can help the Bucs crack a long, surprising touchdown against the stingy Saints defense. Kevin King’s worst enemy, aka Scotty Miller, may honestly spend his last season in Tampa in 2022. He hasn’t been able to keep a quality role in the Bucs offense and it will be quite difficult for him to be involved with the Bucs current talent at WR.