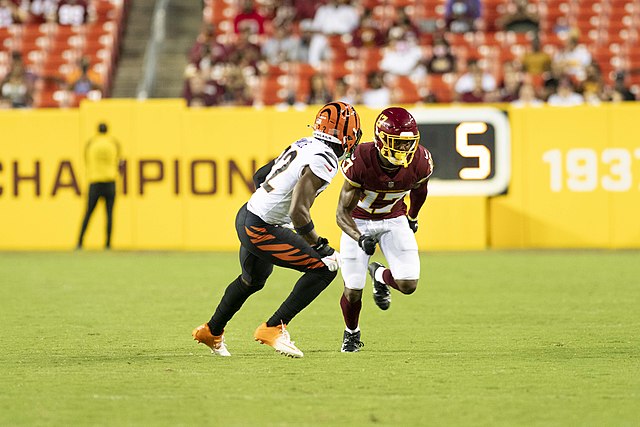 What is the Bengals cornerback outlook?

The Cincinnati Bengals are known for possessing a high-powered passing offense, but they can’t always plan on winning in shootouts. They need to have a potent secondary to slow down opponents. Their top CB Chidobe Awuzie, who was recently titled the best chess player in the NFL, had a strong 2022 campaign — as he notched an 83.3 grade by PFF. He had 64 tackles, 14 pass deflections, and a personal best 2 interceptions.

The other starting CB on the Bengals is none other than Twitter’s beloved Eli Apple. The former Saints CB had 2 picks, 10 pass deflections, and 49 combined tackles. According to PFF, he allowed the lowest passer rating in man coverage last season. Zac Taylor referred to the re-singing of Apple as a “no-brainer”.

Besides the top two CBs in Cincy, the Bengals will rely on Mike Hilton at CB3 and Daxton Hill at CB4. Hilton ousted two interceptions (including a pick-six), 5 pass deflections, and he had 66 combined tackles. Hilton was given a 72.3 grade by PFF for his performance a season ago.

Furthermore, they still have a young CB with lots of potential in Daxton Hill. He may just be the future CB2 across from Awuzie. Of course, he was selected by the Bengals with their 31st pick in the 2022 NFL Draft. He had a 6.33 prospect grade. He does also offer versatility as a safety. Tre Flowers may also be asked to be a factor in big contests. Flowers had three interceptions in 2019. He had 39 combined tackles last season.

The Bengals ranked 26th in passing yards allowed last season. Perhaps the Bengals secondary can improve with a wiser Apple and early production from the rook to at least a middle-of-the-pack pass defense in 2022.