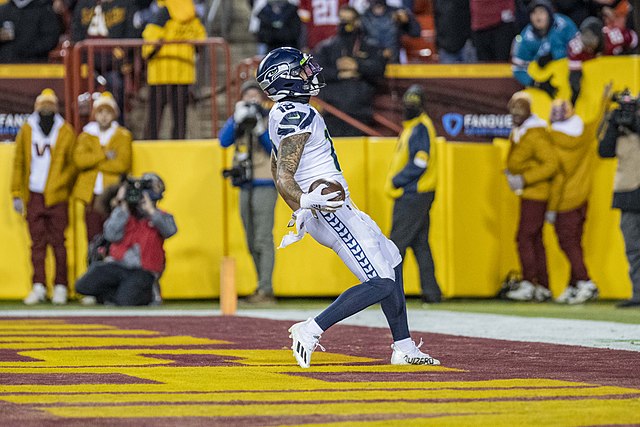 What is the Seahawks wide receiver outlook right now?

The Seattle Seahawks don’t have Super Bowl MVP Russell Wilson, but they still have an incredible hulk-like WR in DK Metcalf and a speed demon in Tyler Lockett. Metcalf ousted 12 touchdowns last season and 10 TDs in 2021. PFF also gave him an 80.9 grade for his 2021 performance. Seahawks Wire also stated Metcalf is the best non-QB MVP for the Hawks. Of course, the Hawks likely need to make him the highest-paid WR soon.

Lockett has been a “Marques Colston” like WR — as he has been one of the best players to not make the Pro Bowl. He is coming off his third 1,000+ yard season in 2022. He also has registered 8+ touchdowns in each of the past four seasons. He scored an 81.0 grade by PFF last season. Lockett inked a four-year contract extension worth $69 million in 2021.

Freddie Swain ousted 25 receptions, 343 yds, and 4 touchdowns last season. He clearly isn’t the best WR3 for the Hawks. After Swain, I believe the x-factor in the Hawks WR room is Marquise Goodwin. He recorded a fantastic 2017 campaign with the 49ers — as he unveiled 56 receptions for 962 yds. In 2021, he ousted 20 receptions for 313 yds with the Bears.

The Hawks will also rely on the 24-year-old TE Noah Fant to be a receiving weapon — as he logged 670+ yds in 2020 and 2021. All in all, the Hawks have a slightly above-average receiving group. PFF ranked the Seahawks WR group as the 13th best unit in the league. The Seahawks WR room really needs to unleash their best performances next season for either Geno Smith or Drew Lock.