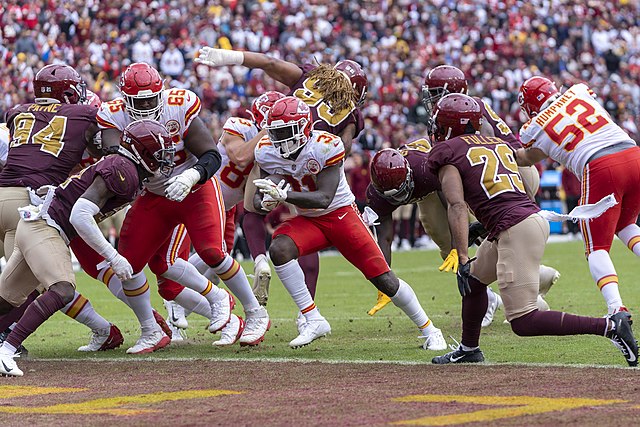 What is the Chiefs offensive line outlook?

The Kansas City Chiefs may have one of the most dangerous quarterbacks, but they also quietly have a stellar offensive line. PFF ranked the Chiefs OL as the ninth-best unit in the league. They are anchored by the three-time Pro Bowl LT Orlando Brown Jr. He was phenomenal last season — as he only allowed four sacks and registered a 75.4 grade by PFF.

Joe Thuney, also known as the only player in NFL history to start in the Super Bowl in each of his first three seasons, should continue to be a reliable, force for the Chiefs. He garnered an 80.5 grade by PFF a season ago — while allowing a mere one sack.

Andrew Wylie needs to improve his craft a bit — after allowing four sacks and having a 67.2 grade by PFF in 2021. He re-signed to the Chiefs on a one-year deal worth $2.5 million dollars this off-season. They may wish to ink a new guard in the 2022 FA period.

Creed Humphrey (2021 second-round pick) was a rockstar in his rookie campaign — as he only allowed one sack while locking in a 91.4 grade by PFF. He was dubbed as the second-best center in football last season. Trey Smith (sixth-round pick in 2021) had a modest season (72.3 grade by PFF). However, he did allow four sacks in 2021.

It’s quite clear that the Chiefs left side of their OL is very well-built to handle AFC West pass rushers like Joey Bosa, Maxx Crosby, Khalil Mack, and Chandler Jones. It will be paramount that the Chiefs OL can stay healthy for their gifted QB moving forward.