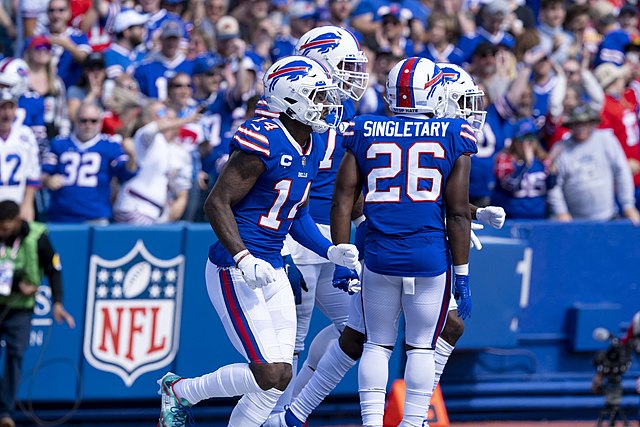 What is the Bills running back outlook in 2022?

The Buffalo Bills may have a Thanos-like quarterback in Josh Allen (37 passing touchdowns in 2020 and 36 passing TDs in 2021), but they still possess a lethal rushing attack with their dual-threat QB and the electric RB Devin Singletary – as Buffalo ranked sixth in rushing yards last season. The RB that learned under Frank Gore ousted 4.6 YPC, 870 rushing yards, and 7 rushing touchdowns in 2021. Singletary also garnered a 64.8 grade by PFF for his 2021 performance. He will aspire to have his best season in 2022 — which is also his contract season.

Singletary will be accompanied by James Cook, also known as the brother Dalvin Cook. Cook ousted 1,012 total yards and 11 total touchdowns in 2020. Bills Wire nicely noted how Cook was the Bills highest drafted RB since 2010. CBS Sports has dubbed Cook as a Top-5 rookie RB and PFF listed Cook as a fantasy sleeper in 2022. He’s also a major dynasty sleeper given Singletary’s contract situation.

After the top two Bills RBs, the Bills also have Zack Moss and Duke Johnson. Moss registered 576 total yds and 5 combined touchdowns in 2020, then unveiled 542 all-purpose yds and 5 combined TDs in 2021. He wasn’t the most efficient ball-carrier for the Bills last season – as he averaged 3.6 YPC and had a 67.3 grade by PFF. Hence, the Bills opted to swing big for Cook in the 2022 draft. The Bills will also anticipate production from Duke Johnson. He’s an excellent pure RB4 (as he ousted 330 rushing yds and averaged 4.6 YPC last season), but he could be a somewhat popular receiving back for Allen. He has five seasons of 40+ receptions in his career. Johnson had a 72.1 grade by PFF last season.