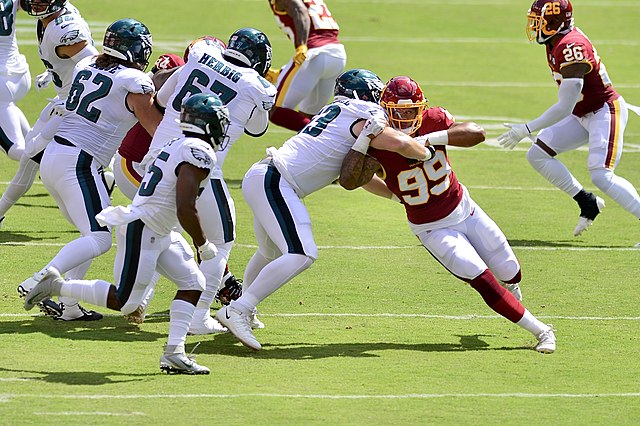 What is the Eagles offensive line outlook?

The Philadelphia Eagles may have the polarizing and ascending Jalen Hurts w/ new, threatening weapons in A.J. Brown and Kenneth Gainwell, but they still need their beloved OL to hold their end of the bargain. The projected OL starters in 2022 are LT Jordan Mailata, LG Landon Dickerson, C Jason Kelce, RG Isaac Seumalo, and RT Lane Johnson.

Their top dogs are unequivocally Mailita, Johnson, and Kelce. Mailata had a very superb 87.4 grade by PFF last season – as he only allowed a few sacks. He signed a contract extension worth $64 million through 2025. PFF revealed that Mailata’s contract was number one atop their list of best NFL contracts.

Unfortunately, the three-time Pro Bowl selection has been victim to the injury bug far too often as of late. He missed four games last season and nine contests the season prior. Johnson garnered an 82.4 grade by PFF last season (as he allowed zero sacks). Kelce, also known as one of the “extroverted Kelces” in the NFL, has been an All-Pro center in four of his five past seasons. He’s also been a Super Man-like player – as he hasn’t missed a game since 2014.

Dickerson was a second-round pick by Philly in the 2021 NFL Draft. He had growing pains in his rookie season (as he notched a 67.3 grade by PFF), but he should improve and be the x-factor on the Eagles OL in 2022. Seumalo is a modest guard, but he has had significant injury issues in his career. He missed 14 games last season – after missing seven games in 2020. He will be a FA after this season, so the Eagles may look for his replacement in the 2023 NFL Draft.