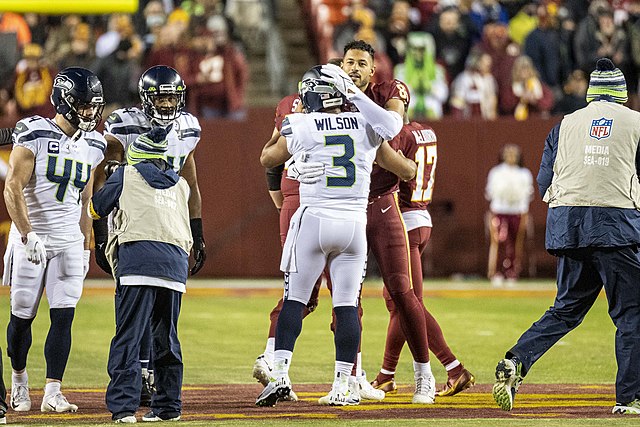 The Denver Broncos made a bold move to acquire the talented dual-threat quarterback Russell Wilson this off-season. Wilson will turn 34 years old in November, but he has shown that’s still capable of performing at a high level. He threw a career-high 40 passing touchdowns in 2020 and then threw 25 passing touchdowns to six interceptions last season. PFF gave Wilson a modest 73.9 grade for his 2021 campaign.

Wilson will seek to follow in Peyton Manning’s footsteps by playing his best football with the Broncos. He will look to perform at a high level with his following weapons: Javonte Williams, Melvin Gordon, Courtland Sutton, Jerry Jeudy, and Tim Patrick. PFF also ranked the Broncos OL as the 16th best OL in the NFL. It may seem like the Broncos don’t exhibit a potent OL unit, but it’s still a massive upgrade from his former OL in Seattle (which was ranked as the worst OL by PFF). His vital LT Garrett Bolles garnered an impressive 76.6 grade by PFF last season.

With that enunciated, an interesting, important question reflects on Wilson at this stage in his career: Is Wilson an elite quarterback?

Wilson has a big arm and he’s an efficient QB. His well-rounded ability was reflected extremely well by PFF in 2021 – as PFF gave him the highest QB grade prior to his injury.

There are plenty of his critics that may believe he’s “Alex Smith on steroids” because he doesn’t throw 5,000+ passing yards or lead the league in touchdown passes. Although, he’s actually been a superb touchdown magnet as of late. He was third in TD passes in 2020 (with 40 TD passes) and third in passing touchdowns in 2019 (with 31 TD passes).

With that said, I believe he also stacks up quite well with fellow top-end NFL signal-callers. Matthew Stafford won a Super Bowl and threw unearthly numbers with the LA Rams, but he also unleashed a miserable 17 interceptions in 2021. Stafford’s PFF grade in 2021 (80.7) was well-below Wilson’s PFF grade in his fully healthy 2020 season grade (90.3).

Although, I do believe that there are a few young, mega-talented pocket passers that stand above Wilson at this point. Joe Burrow had a majestic 91.4 grade by PFF in 2021 while being sacked 51 times. I also like Josh Allen’s dual-threat ability (42 total touchdowns and 5,200+ total yds) and direction a bit more than Wilson. Of course, the two greek god-like QBs in Aaron Rodgers and Tom Brady should be placed above Wilson, as well.

All in all, I project Wilson as the fifth-best QB heading into the 2022 season and I believe he’s clearly an elite QB right now. I also believe that his predicament in Denver is more superb than his prior situation in Seattle. Perhaps he can enjoy a very productive season (similar to his 2020 campaign) while leading his team to the first seed in the AFC and then proceed to win his first-ever MVP.