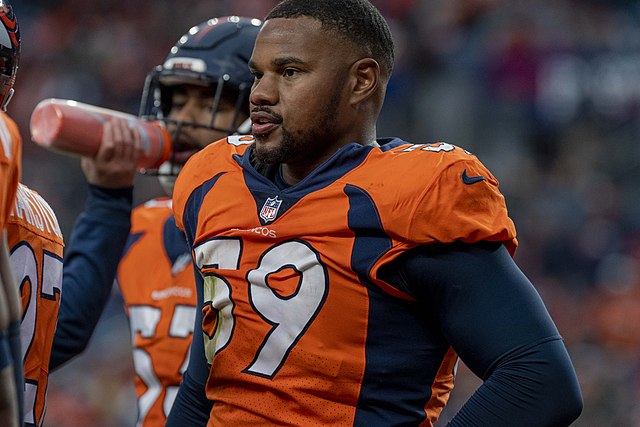 Who is the best AFC West team right now?

The wild AFC West possesses countless gifted athletes and eventual exciting showdowns. Patrick Mahomes will plan to terrorize the league without Tyreek Hill, Justin Herbert will push for his first MVP ring, Russell Wilson will seek to return to the Super Bowl, and the reunited QB-WR duo in Las Vegas will plan to wreak havoc in 2022. With that said, It’s quite clear that the AFC West division is the best division in all of football. Well, a fascinating question arises: who is the best AFC team at the moment?

It can be hard to be in favor of a change, but I do love the chances of the Kansas City Chiefs Los Angeles Chargers being the crowned the AFC West Champions next season. Per Bet Online, Herbert has the second-best odds to win MVP next season. He will lean on his superb WR duo (Keenan Allen and Mike Williams) and the versatile Austin Ekeler to help him dismantle opponents. I also expect former DPOY Khalil Mack and J.C. Jackson to continue to be unearthly forces next season. Mack was actually on a superb pace last season – as he ousted six sacks, six TFLs, and seven QB hits in seven contests. The former Patriots CB in Jackson registered eight interceptions last season – after recording nine in 2020. I do expect the Chiefs to have a high-powered offense without Hill, but I still believe his exit from the team slightly damages their offensive talent. Furthermore, the Honey Badger-less Chiefs defense should be less imposing than its 2021 defense.

The Chiefs aren’t the best team in the wild AFC West, but they are still a Top-5 AFC team in my opinion. Mahomes will look to unleash havoc with Travis Kelce (who has made the Pro Bowl in each season from 2015 to 2021), JuJu Smith-Schuster, and darkhorse OROY candidate Skyy Moore moving forward. PFF also ranked the Chiefs OL as the ninth-best OL unit in the league. Of course, the vital LT Orlando Brown Jr. is still on the search for a long-term contract. According to PFT, the two sides were “really close”, but unable to agree to a long-term contract. The Chiefs defense also showcases an exciting pass-rush with the behemoth Chris Jones (who recorded nine sacks and 8 TFLs in 14 games last season), Frank Clark, and the talented rookie George Karlaftis. Andy Reid’s squad could really witness a lot of magic from their 2022 first-round pick (Karlaftis) and their 2022 second-round pick (Moore).

The Denver Broncos have an elite defense and Russell Wilson. The Broncos may have a tough time winning their division next season, but they shouldn’t lose sight of obtaining the Lombardi trophy. The Broncos 33-year-old QB is also in the last year of his contract, so he will look to sign a hefty extension soon. It shouldn’t be underestimated that the Broncos have one of the NFL’s top 1-2 RB tandems (with Javonte Williams and Melvin Gordon), as well. Williams ran angry for 903 yds (while averaging 4.4 YPC) in his rookie campaign. The other Broncos RB from Wisconsin has accumulated 1,904 rushing yards and 17 rushing TDs in his past two seasons combined. The Broncos weren’t able to bring back Von Miller, but they should be excited about their pass-rushing tandem in the new speed rusher Randy Gregory and Bradley Chubb (who missed 10 games last season). The best part of the Broncos defense unequivocally rests in their secondary – which should expect to see Patrick Surtain make his first Pro Bowl.

The LV Raiders came out with the miraculous victory against the Chargers last season, but I don’t like their odds to thrive in the absolutely brutal AFC West division in 2022. The Raiders and their marvelous offensive trio should strive to have a winning record next season – despite their hurdles in their division. In particular, I expect Carr to likely have a personal best passing touchdown figure next season. Per NBC Sports, Carr stated, “We both went all in to play together again”. It’s clearly true that the former Fresno State QB-WR duo is relieved to be in the same offensive unit for the second time. I love the Raiders addition of Chandler Jones (10.5 sacks last season) – as he and Maxx Crosby should formulate a terrific pass-rushing tandem. Although, I’m still not confident in their all-around talent on defense.