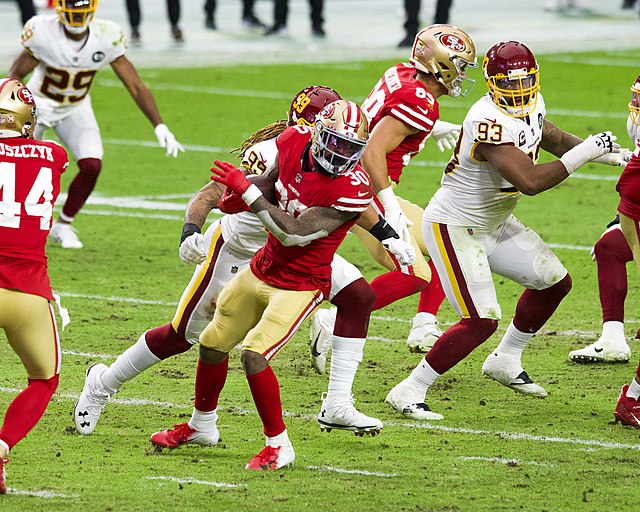 The San Francisco 49ers like to unleash a thousand cuts against opponents with their rushing attack. The 49ers ranked fifth in rushing attempts last season — as they also ranked seventh in rushing yards and fifth in rushing touchdowns. The methodical Kyle Shanahan has Elijah Mitchell, Jeff Wilson Sr, Tyrion Davis-Price, and Trey Sermon at RB.

The alpha RB Mitchell absolutely has the potential to be Top-5 in rushing yards in 2022. Mitchell ranked eighth in rushing yds (963) last season while missing six games. He also averaged an impressive 4.7 YPC. PFF gave Mitchell an admirable 76.3 grade for his 2021 performance.

The second 49ers RB, Wilson Sr, isn’t a scary RB2, but he has fine production and experience in the 49ers system. He recorded 600 rushing yds and 7 TDs in 2020 and then ran for 294 yds and 2 TDs in 9 contests last season. He re-signed with SF on a one-year deal worth $1.085 million dollars this off-season.

Davis-Price (2022 third-round pick) or Sermon (2021 third-round pick) will likely be the future RB2 after the 2022 season. The former LSU RB ran angry for 1,003 yards and six touchdowns last season. His best rushing performance against Florida (where he notched 287 yds and 3 TDs). His impressive power is similar to the recent AFC Champion Joe Mixon.

Sermon was honestly a disappointment last season, but Shanny has expressed enthusiasm about the 23-year-old this off-season. Per NBC Sports, Shanny told reporters on Tuesday, “Watching him in OTAs, he was as yoked-up as he could be. He was in as (good of) shape as he could be. Like you could tell the guy learned from his rookie year and wants to do a lot more.” Sermon is definitely an x-factor in the 49ers offense moving forward.

The 49ers ranked second in rushing yards in 2019 and they will look to return to being a Top-3 rushing team with their young and utterly explosive RB group next season. The 49ers rushing offense can help their wiz head coach finally obtain his ever-elusive first Super Bowl ring.