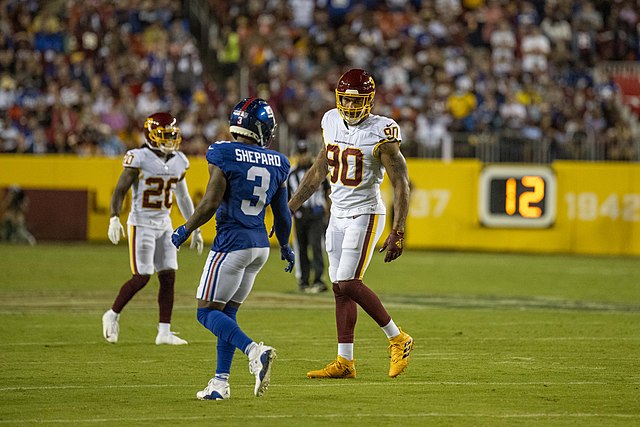 What is the Giants wide receiver outlook?

The New York Giants don’t have the prime version of Odell Beckham Jr or the version of Victor Cruz that never stopped salsa dancing heading into the 2022 season. Nonetheless, they still have exciting faces at their WR position: such as Kenny Golladay, Kadarius Toney, Sterling Shepard, and the 2022 second-round pick Wan’Dale Robinson.

I find Toney as the most curious wideout right now. He is slightly less questionable and slightly more talented than Eli Apple in his latest Giants tenure. Toney obtained 420 yards in 10 games last season, but a wiser and 17-game slate of Toney should unveil a lot more fury in 2022. I believe it was the right move by the Giants GM Joe Schoen to retain the 23-year-old Toney this off-season. He sincerely has a rubber-like ability and he just needs the ball in space to make magic occur.

Golladay will be the main WR threat and he has expressed that he is feeling positive after a disappointing 2021 season (521 yds and a whopping zero TDs). Undoubtedly, his chemistry with Danny Dimes should be scarier than a season ago. Giants Wire dubbed him as the worst contract this off-season, but he can redeem himself with improved chemistry and ability from Jones moving forward. It’s safe to say that Jones certainly won’t stand a chance without the former Lions wideout in his own make or break 2022 campaign.

Shepard was once expected to be a top-notch wideout in the Big Apple, but he is now regarded as an okay, 29-year-old weapon. He restructured his contract for the 2022 season and his deal also can be voided in 2023. He will compete with the rookie WR, Robinson, for targets behind Golladay and Toney. Robinson has been seen as an overrated rookie by B/R, but he still has plenty of athletic ability. He may honestly struggle to get involved with a WR group that has two hungry, impatient faces, but he is excellent depth in his first season.

All in all, the Giants don’t have the most proven WR unit – which is evident in PFF slotting them as the 22nd best WR group entering 2022. I honestly anticipate Toney being a legitimate force in his sophomore season, so I believe the Giants have a middle-of-the-pack WR unit at this point.